More on the Safety of Bisphenol-A

On January 18th, we noted that the FDA had recently expressed "some concern" about the health effects of bisphenol-A (BPA), a plasticizer commonly used in the manufacture of hard plastics. Although the agency declared the chemical to be safe in 2008, it now says that it has "some concern about the potential effects of BPA on the brain, behavior and prostate glands of fetuses, infants and children." Today, on WBUR's Talk of the Nation - Science Friday, Host Ira Flatow discussed the safety of BPA with N.Y. Times Science Columnist Gardiner Harris. You can listen to their conversation, or read a transcript of it, here: http://www.wbur.org/npr/122857709.

Prominent Psychiatrist John J. Ratey, M.D., co-author, with Dr. Ned Hallowell, of the bestsellers on ADHD Driven to Distraction and, more recently, Delivered from Distraction, has just published a fine new book called Spark: The Revolutionary New Science of Exercise and the Brain. We hope it will prove to be his most widely read and influential work yet. 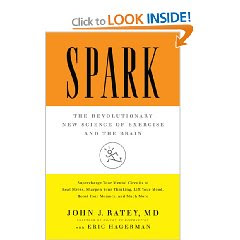 Spark tackles the topic of exercise as a tonic, in addition to or, in many cases, instead of medication for conditions ranging from ADHD and addiction to depression and memory loss, and as our best means of reducing stress even as we sharpen our intellects and optimize our performance in many realms. Scientifically well-grounded, Spark is admirably detailed as to the brain chemistry of learning and mood regulation, yet remains accessible to lay readers.

Of particular interest to parents, as it should be also to educational administrators, is Ratey’s lengthy discussion of the dramatic academic improvements that ensued when the Naperville, Illinois school district adopted a mandatory aerobic fitness program. Naperville high school students now rank first in the nation in fitness and, according to quadrennial TIMSS (Trends in International Mathematics and Science Study) standardized testing, sixth in the world in mathematics achievement and tops overall in science!

In a carefully-controlled study to be published in the April, 2010 issue of the journal Environmental Health Perspectives, researchers from the Columbia Center for Children's Environmental Health (CCCEH) at Columbia University's Mailman School of Public Health found that prenatal exposure to ambient levels of a class of widely-used, flame-retardant chemicals and known endocrine disruptors called polybrominated diphenyl ethers (PBDEs) had adverse neurodevelopmental effects in young children.

PDBEs are commonly applied to a broad array of textiles and other consumer goods, including mattresses, upholstery, building materials and electronic equipment. Because they are additives not chemically bound to these products, they can be released into the environment. Exposure occurs by dietary ingestion or inhalation of dust containing PDBEs.

According to First Author Julie Herbstman, Ph.D., adverse developmental effects were particularly evident at four years of age, when verbal and full-scale IQ scores were reduced by 5.5 to 8.0 points for those with the highest prenatal exposure. Co-Author Dr. Frederica Perera, CCCEH director and professor of environmental health sciences at the Mailman School, said, "The observed reductions in IQ scores are in the range seeen with low-level lead exposures. These findings could have important public health implications."

To ensure the accuracy and specificity of their results, Columbia's investigators controlled for ten other factors previously linked to neurodevelopmental effects. There's more about their fndings here: http://www.sciencedaily.com/releases/2010/01/100119121434.htm
at 9:58 PM No comments:

FDA Expresses "Some Concern" About BPA

Our autism group TDC at NESCA very carefully screened dozens of websites containing material related to autism spectrum disorders, in order to identify those that are easiest to navigate, broadest in scope, most accurate and of greatest utility to families grappling with the challenges of ASD diagnoses. The web is an invaluable tool, but it can also be a minefield of misinformation and exploitation. Here is a list of sites that we feel are solidly grounded scientifically, offering evidence-based programs staffed professionally and services of interest and real value to many families. http://nesca-newton.com/AutismWebResources-TDC-2Columns.pdf
at 11:29 AM No comments:

Martha Herbert, M.D., Ph.D., assistant professor of neurology at Harvard Medical School and director of the TRANSCEND research laboratory at Massachusetts General Hospital, sent us a link to the cover story of the January/February, 2010 issue of E – The Environmental Magazine, entitled, The Search for Autism’s Missing Piece – Autism Research Slowly Turns Its Focus to Environmental Toxicity. You can read it here: http://www.emagazine.com/view/?4984&printview&imagesoff

The lengthy piece recalls a comment by Sudhir Gupta, M.D., Ph.D., Chief of the Division of Basic and Clinical Immunology at the University of California, Irvine, who once famously remarked in regard to autism: “Genes load the gun and environment pulls the trigger.” Pioneering U.C. San Francisco Neuroscientist Michael Merzenich, Ph.D. agrees, saying, “I think there is lots of evidence for increased incidence of autism. Overwhelmingly it supports that there are things in the environment that are contributing to the rate of incidence.” Even so, notes James Adams, Ph.D., head of the Autism/Asperger’s Research Program at Arizona State University, “Most of the autism research is focused on problems in the brain, on genetics and on behavioral treatments. There is still extremely little money out there for looking into environmental issues. And there’s also extremely little money out there for looking at treatments for autism.”
at 9:57 AM No comments:

In a paper recently published in the journal Autism Research, investigators at Children’s Hospital of Philadelphia have reported that children with autism spectrum disorders process sound and language more slowly than children without ASDs, and that delayed auditory processing may be common enough to serve as the elusive biological marker researchers have long sought in making definitive autism diagnoses.

Read more about it here: http://www.scientificblogging.com/news_articles/diagnosing_autism_meg

The study analyzed data collected using magnetoencephalography (MEG), a highly advanced imaging technique that detects and maps subtle changes in the magnetic fields produced by activity within the brain. Its principal author was Timothy P.L. Roberts, Ph.D., Vice Chair of Research in the Department of Radiology of the Children's Hospital of Philadelphia, holder of the Oberkircher Family Chair in Pediatric Radiology and Professor of Radiology at the University of Pennsylvania.

The Developmental Collaborative at NESCA specializes in evaluations for autism in children as young as two years old, and their subsequent treatment through adolescence and transition into adulthood. Many TDC client families have asked us to help them separate wheat from chaff, fact from the fiction that abounds, especially on the web, by directing them to reliable sources of information about these complex and challenging conditions. Accordingly, we have compiled an extensive list of books we recommend on topics ranging from early warning signs to educational program planning, and from the maintenance of healthy personal relationships and family dynamics to first-person accounts of life on the spectrum. You can get TDC’s recommended autism reading list here: http://www.nesca-newton.com/AutismReadingList-TDCLetterhead.pdf
at 5:37 AM No comments:

The Explanatory Power of Epigenetics

The article discusses important new research into the role epigenetic 'marks' play in switching genes on or off, and in regulating their expression--as author John Cloud puts it, telling them whether "to speak loudly or whisper." Salk Institute Biologist Joseph Ecker makes the analogy that if your genome is like computer hardware, then the epigenome is its software. The epigenome consists of cellular material that sits atop the genome, and unlike the genes themselves, which in evolutionary terms, change very slowly over time, the chemicals in the epigenome are relatively reactive and respond quickly to environmental stressors, including nutritional factors and chemical exposures.

Moreover, it seems that changes in the epigenome may be carried over immediately from one generation to the next, as the sort of "inheritance of acquired characteristics" disdained by Darwinian evolutionary theory.

Autism was traditionally held to be a genetic disorder, or disorder of the genome itself. Researchers long pinned their hopes for the development of effective therapies on discovery of 'broken' genes, which have yet to be identified. That straightforward genetic model, however, failed to explain the rapidity of the increase in the prevalance of autism, the heterogeneity of its symptoms, its differential distribution between boys and girls and the fact that in sets of identical twins, whose genetic make-up is the same, one might have autism and the other, not.

Many now argue that autism is more properly regarded as an epigentically-modulated disorder, and that to continue to look for broken genes is a bit like concluding that a lightbulb has burned out without first having checked whether or not the switch has been turned on. That genetic switch has finally been identified. Epigenetics appears to offer great explanatory insight into autism, particularly into how and why it manifests so differently between individuals. Stay tuned...
at 11:47 AM No comments: