The CDC estimates 1 in 88 children has been identified with an autism spectrum disorder (ASD). Why is the number of children with ASDs on the rise?

Find out what CDC has learned. 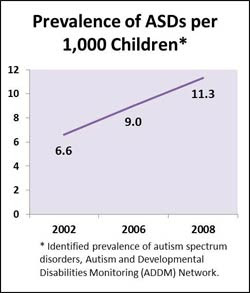 The Centers for Disease Control and Prevention (CDC) estimates that about 1 in 88 children has been identified with an autism spectrum disorder (ASD). This data comes from the Autism and Developmental Disabilities Monitoring (ADDM) Network, which estimated the number of 8-year-old children with ASDs living in 14 communities throughout the United States in 2008. This new estimate marks a 23% increase since our last report in 2009, and a 78% increase since our first report in 2007.

At CDC, we know that people want answers to what is causing this increase, and so do we. The reasons for the increase in the identified prevalence of ASDs are not understood completely. Some of the increase is due to the way children are identified, diagnosed, and served in their local communities, although exactly how much is due to these factors is unknown. Also, it is likely that reported increases are explained partly by greater awareness by doctors, teachers, and parents. To understand more, CDC will keep guiding and conducting research into what is putting our children at risk.

However, the data tell us one thing with certainty—more children are being identified as having ASDs than ever before and these children and their families need help.

CDC researchers developed a model to estimate how changes in six pregnancy and birth factors might have contributed to the increase in ASD prevalence:
The study found that it is very unlikely that any of the pregnancy and birth factors included in the study could have been responsible for such a large increase in ASDs from 2002 through 2006.
However, the model developed for this study will be useful for future research and can be used to assess other risk factor scenarios.
Evaluation Workshop 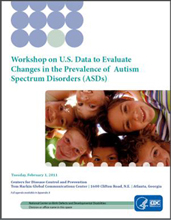 To provide a forum for sharing the latest information on ASD prevalence changes, CDC and Autism Speaks co-hosted the "Workshop on U.S. Data to Evaluate Changes in the Prevalence of Autism Spectrum Disorders." The workshop brought together scientists and stakeholders from the autism community to increase knowledge about ASD prevalence, to learn from other conditions, and to share ideas on how to move forward to better understand ASD trends.