How Exercise Could Lead to a Better Brain

NOTE: Running makes mice smarter; it probably works for people, too. At NESCA, our clinicians routinely recommend exercise as part of their treatment plans for anxiety and learning disorders, ADHD and depression. Parents might consider reading Spark: The Revolutionary Science of Exercise and the Brain by Psychiatrist John Ratey, which we featured HERE in January, 2010.

The value of mental-training games may be speculative, as Dan Hurley writes in his article on the quest to make ourselves smarter, but there is another, easy-to-achieve, scientifically proven way to make yourself smarter. Go for a walk or a swim.

For more than a decade, neuroscientists and physiologists have been gathering evidence of the beneficial relationship between exercise and brainpower. But the newest findings make it clear that this isn’t just a relationship; it is the relationship.

Using sophisticated technologies to examine the workings of individual neurons — and the makeup of brain matter itself — scientists in just the past few months have discovered that exercise appears to build a brain that resists physical shrinkage and enhance cognitive flexibility. Exercise, the latest neuroscience suggests, does more to bolster thinking than thinking does.

The most persuasive evidence comes from several new studies of lab animals living in busy, exciting cages. It has long been known that so-called “enriched” environments — homes filled with toys and engaging, novel tasks — lead to improvements in the brainpower of lab animals. In most instances, such environmental enrichment also includes a running wheel, because mice and rats generally enjoy running. Until recently, there was little research done to tease out the particular effects of running versus those of playing with new toys or engaging the mind in other ways that don’t increase the heart rate.

So, last year a team of researchers led by Justin S. Rhodes, a psychology professor at the Beckman Institute for Advanced Science and Technology at the University of Illinois, gathered four groups of mice and set them into four distinct living arrangements. One group lived in a world of sensual and gustatory plenty, dining on nuts, fruits and cheeses, their food occasionally dusted with cinnamon, all of it washed down with variously flavored waters. Their “beds” were colorful plastic igloos occupying one corner of the cage. Neon-hued balls, plastic tunnels, nibble-able blocks, mirrors and seesaws filled other parts of the cage. Group 2 had access to all of these pleasures, plus they had small disc-shaped running wheels in their cages. A third group’s cages held no embellishments, and they received standard, dull kibble. And the fourth group’s homes contained the running wheels but no other toys or treats.

All the animals completed a series of cognitive tests at the start of the study and were injected with a substance that allows scientists to track changes in their brain structures. Then they ran, played or, if their environment was unenriched, lolled about in their cages for several months.

Afterward, Rhodes’s team put the mice through the same cognitive tests and examined brain tissues. It turned out that the toys and tastes, no matter how stimulating, had not improved the animals’ brains.

“Only one thing had mattered,” Rhodes says, “and that’s whether they had a running wheel.” Animals that exercised, whether or not they had any other enrichments in their cages, had healthier brains and performed significantly better on cognitive tests than the other mice. Animals that didn’t run, no matter how enriched their world was otherwise, did not improve their brainpower in the complex, lasting ways that Rhodes’s team was studying. “They loved the toys,” Rhodes says, and the mice rarely ventured into the empty, quieter portions of their cages. But unless they also exercised, they did not become smarter. 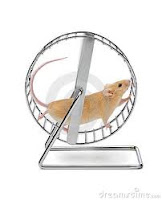 Why would exercise build brainpower in ways that thinking might not? The brain, like all muscles and organs, is a tissue, and its function declines with underuse and age. Beginning in our late 20s, most of us will lose about 1 percent annually of the volume of the hippocampus, a key portion of the brain related to memory and certain types of learning.

Exercise though seems to slow or reverse the brain’s physical decay, much as it does with muscles. Although scientists thought until recently that humans were born with a certain number of brain cells and would never generate more, they now know better.

In the 1990s, using a technique that marks newborn cells, researchers determined during autopsies that adult human brains contained quite a few new neurons. Fresh cells were especially prevalent in the hippocampus, indicating that neurogenesis — or the creation of new brain cells — was primarily occurring there. Even more heartening, scientists found that exercise jump-starts neurogenesis. Mice and rats that ran for a few weeks had about twice as many new neurons in their hippocampi as sedentary animals. Their brains, like other muscles, were bulking up.

But it was the ineffable effect that exercise had on the functioning of the newly formed neurons that was most startling. Brain cells can improve intellect only if they join the existing neural network, and many do not, instead rattling aimlessly around in the brain for a while before dying.

One way to pull neurons into the network, however, is to learn something. In a 2007 study, new brain cells in mice became looped into the animals’ neural networks if the mice learned to navigate a water maze, a task that is cognitively but not physically taxing. But these brain cells were very limited in what they could do. When the researchers studied brain activity afterward, they found that the newly wired cells fired only when the animals navigated the maze again, not when they practiced other cognitive tasks. The learning encoded in those cells did not transfer to other types of rodent thinking.

Exercise, on the other hand, seems to make neurons nimble. When researchers in a separate study had mice run, the animals’ brains readily wired many new neurons into the neural network. But those neurons didn’t fire later only during running. They also lighted up when the animals practiced cognitive skills, like exploring unfamiliar environments. In the mice, running, unlike learning, had created brain cells that could multitask.

Just how exercise remakes minds on a molecular level is not yet fully understood, but research suggests that exercise prompts increases in something called brain-derived neurotrophic factor, or B.D.N.F., a substance that strengthens cells and axons, fortifies the connections among neurons and sparks neurogenesis. Scientists can’t directly study similar effects in human brains, but they have found that after workouts, most people display higher B.D.N.F. levels in their bloodstreams.

Few if any researchers think that more B.D.N.F. explains all of the brain changes associated with exercise. The full process almost certainly involves multiple complex biochemical and genetic cascades. A recent study of the brains of elderly mice, for instance, found 117 genes that were expressed differently in the brains of animals that began a program of running, compared with those that remained sedentary, and the scientists were looking at only a small portion of the many genes that might be expressed differently in the brain by exercise.

Whether any type of exercise will produce these desirable effects is another unanswered and intriguing issue. “It’s not clear if the activity has to be endurance exercise,” says the psychologist and neuroscientist Dr. Arthur F. Kramer, director of the Beckman Institute at the University of Illinois and a pre-eminent expert on exercise and the brain. A limited number of studies in the past several years have found cognitive benefits among older people who lifted weights for a year and did not otherwise exercise. But most studies to date, and all animal experiments, have involved running or other aerobic activities.

Whatever the activity, though, an emerging message from the most recent science is that exercise needn’t be exhausting to be effective for the brain. When a group of 120 older men and women were assigned to walking or stretching programs for a major 2011 study, the walkers wound up with larger hippocampi after a year. Meanwhile, the stretchers lost volume to normal atrophy. The walkers also displayed higher levels of B.D.N.F. in their bloodstreams than the stretching group and performed better on cognitive tests.

In effect, the researchers concluded, the walkers had regained two years or more of hippocampal youth. Sixty-five-year-olds had achieved the brains of 63-year-olds simply by walking, which is encouraging news for anyone worried that what we’re all facing as we move into our later years is a life of slow (or not so slow) mental decline.

Gretchen Reynolds writes the Phys Ed column for The Times’s Well blog. Her book, ‘‘The First 20 Minutes,’’ about the science of exercise, will be published this month.
at 10:53 AM