From the Psychology Today Blog Making Sense of Autistic Spectrum Disorders: A Critical Review of Fact, Fiction, and Speculation in the Field of Autism

Everywhere you turn, you hear about "rescue," "recovery," and "cures" for ASD. There are lots of heartwarming testimonials, and lots of snake-oil vendors eager to sell you their products, but there are no randomized controlled studies of anything, to show that ASD is curable, or to show that the long-term outcome is different from what would have happened via natural history alone.

The most intense features, such as flapping and spinning, echolalia, and panic in response to changes in routine or sensory overload, gradually fade, with or without intervention. Leo Kanner first documented this in 1943. The higher the IQ, the faster and more completely the symptoms fade; this has been summarized in my own research. In order to establish that a given therapy alters long-term outcome, one would need to show that the child is more improved than would have been the case just by passage of time.

Nobody has ever done that, for any therapy. Wouldn't that kind of research be unethical? A good question. On the other hand, what are the ethics of promising a cure without proof, and billing a family tens of thousands of dollars? We wouldn't need to have a "no treatment" group. We could compare treatments "A" and "B," or 20 hours per week of "A" versus 30 or 40, and so forth. But it's never been done.

Alas, there is another, deeper problem with claims of cure: Adolescents and adults who have "outgrown" ASD diagnoses are still plagued by a host of non-ASD neuropsychological disorders: anxiety, depression, bipolar disorder and a susceptibility to alcoholism. This is not "cure." 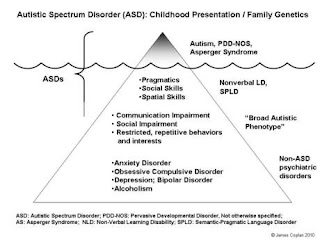 The figures show what I'm talking about. You saw the first of these figures in Post 16: a neurodevelopmental "iceberg," with ASD at the tip. These are the children who come to see me in the office, for initial diagnosis. When I look in the family history, I usually find that one or both parents have some combination of the issues that are "below the water line" of that first iceberg; anxiety, depression, or some other mental health issue. 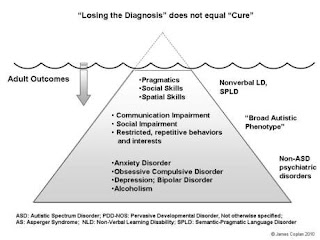 The second figure is based on long-term outcome studies of adults with a childhood diagnosis of ASD, and shows the same disorders. The "tip" of the iceberg (ASD) has been worn away, but all the issues that lie beneath the waterline remain.

References for both of these figures are listed in my book.

Dr. James Coplan is board-certified in general pediatrics, neurodevelopmental disabilities and developmental-behavioral pediatrics. He is also the sibling of an individual with special needs. Dr. Coplan has published extensively in the medical literature on early speech and language development, and has written a book for parents of children on the autistic spectrum: Making Sense of Autistic Spectrum Disorders: Create the Brightest Future for Your Child with the Best Treatment Options (Bantam-Dell, 2010). He is in private practice in Rosemont, PA, teaches in the Medical and Nursing Schools at the University of Pennsylvania and is a public speaker on the subject of early child development and autistic spectrum disorder.
at 1:31 PM