From the May, 2012 Issue of The Atlantic Magazine

The day their son was born, Monica Rogati and her husband began obsessively plotting his life via thousands of bits of data they punched into the smartphone app Baby Connect. They called the data “baby I/O,” a reference to the computing expression input/output and the kind of “geeky joke,” as Rogati puts it, that you might expect from a pair of professional data crunchers with doctorates from Carnegie Mellon.

With the baby’s feedings (input), diapers (output), sleep sessions, and other accomplishments duly registered, he generated 300 data points each month.

This may sound like a lot of information for a very small person, but it’s typical grist for apps designed to tally a baby’s every blink and burp and sniffle, in hopes of charting his development over time. Among Baby Connect’s competitors are Total Baby, Baby Log, iBabyLog, Evoz, and the new Bedtime app from Johnson’s Baby, as well as Web-based programs such as Trixie Tracker (which an enterprising stay-at-home dad named after his daughter). Since Baby Connect launched, in 2009, Rogati and 100,000 other users have logged 47 million “events,” including 10 million diaper changes (with annotations in exacting and unmentionable detail). 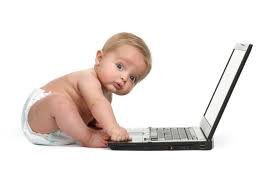 At their most basic, these first-generation baby-data apps offer tech-savvy parents a substitute for handwritten diaper-change and feeding logs. The apps’ greater innovation, however, has been in charting and analyzing children’s data, in the process making parenthood a more quantifiable, science-based endeavor.

Forthcoming versions of baby-data apps are poised to bring even more dramatic change, allowing parents to compare their child with other children in great detail.

In place of sidelong glances on the playground and calls to the pediatrician, mothers and fathers will have a new and more definitive way of answering an old question: Is my child normal? What remains to be seen is whether this new trove of information will reduce the anxieties of early parenthood or, by allowing constant, nervous comparisons, bring them into sharper relief.

The first generation of data apps has had the potential to decrease parental anxiety, by helping to make sense of early infancy. A tired new parent can find solace in a graph showing sleep patterns emerging after the chaos of a baby’s early weeks. The difference between a Trixie Tracker scatter plot of a one-month-old’s sleep and a six-month-old’s sleep (charting sleep-session start times against their duration) is stark: the first image is a depressing mess of dots with little differentiation between day and night.

By six months, though, the dots begin clustering in a reassuring pattern, with a correlation appearing between nighttime and longer stretches of sleep.

The payoff for Rogati’s data-entry efforts came when her son started waking randomly during the night. Was it the introduction of oatmeal? Or was a later afternoon nap the culprit? Rogati wasn’t sure, until she isolated the “oatmeal variable,” as she called it, by reviewing aggregated feeding charts and sleep graphs.

Eventually, though, she was no longer satisfied by her son’s own data set. What she really wants is to be able to compare him to the crowd—to run a computer algorithm similar to those she runs as a data scientist at LinkedIn, where she probes a 150-million-person database to answer questions like: Which first names correlate with a successful career?

She doesn’t have long to wait. Evoz has partnered with the hardware manufacturer Belkin to produce an infant monitor that is scheduled to appear on the shelves of mass-market retailers this fall. By gathering and sending recorded data (on everything from sleeping to crying) to Evoz via a home Wi-Fi network, the monitor will free parents from the chore of logging data manually. More important, once the database is big enough, it will also let parents compare their baby with fellow users’ babies of the same age and gender. Other app makers, including Baby Connect and Johnson’s Baby, are considering similar updates later this year.

Rogati imagines that this crowdsourcing will provide an early-warning system to help parents determine what is and isn’t out of the ordinary: “He’s in the 50th percentile, he is perfectly normal.” Or “This is in the 99.9th percentile. Maybe this is not normal.” It will be a way, she says matter-of-factly, “to debug your baby for problems.”


Mya Frazier is a business journalist based in Columbus, Ohio.
at 1:46 PM