Preliminary results from an ongoing, large-scale study by Yale School of Medicine researchers shows that oxytocin -- a naturally occurring substance produced in the brain and throughout the body -- increased brain function in regions that are known to process social information in children and adolescents with autism spectrum disorders (ASD).

A Yale Child Study Center research team that includes postdoctoral fellow Ilanit Gordon and Kevin Pelphrey, the Harris Associate Professor of Child Psychiatry and Psychology, will present the results on May 19 at the International Meeting for Autism Research. 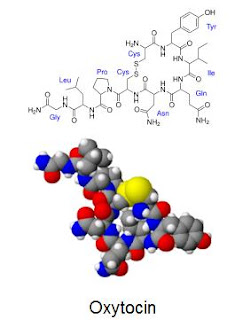 "Our findings provide the first, critical steps toward devising more effective treatments for the core social deficits in autism, which may involve a combination of clinical interventions with an administration of oxytocin," said Gordon. "Such a treatment approach will fundamentally improve our understanding of autism and its treatment."

Social-communicative dysfunctions are a core characteristic of autism, a neurodevelopmental disorder that can have an enormous emotional and financial burden on the affected individual, their families, and society.

Gordon said that while a great deal of progress has been made in the field of autism research, there remain few effective treatments and none that directly target the core social dysfunction. Oxytocin has recently received attention for its involvement in regulating social abilities because of its role in many aspects of social behavior and social cognition in humans and other species.

To assess the impact of oxytocin on the brain function, Gordon and her team conducted a first-of-its-kind, double-blind, placebo-controlled study on children and adolescents aged 7 to 18 with ASD. The team members gave the children a single dose of oxytocin in a nasal spray and used functional magnetic resonance brain imaging to observe its effect.