What Eating Too Much Sugar Does to Your Brain

"The damage sugar does to our bodies begins in our brains."

Overeating, poor memory formation, learning disorders, depression -- all have been linked in recent research to the over-consumption of sugar. And these linkages point to a problem that is only beginning to be better understood: what our chronic intake of added sugar is doing to our brains. 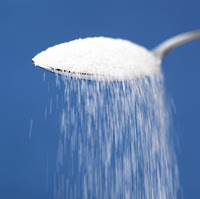 According to the U.S. Department of Agriculture (USDA), the average American consumes 156 pounds of added sugar per year. That's five grocery store shelves loaded with 30 or so one pound bags of sugar each. If you find that hard to believe, that's probably because sugar is so ubiquitous in our diets that most of us have no idea how much we're consuming. The Centers for Disease Control (CDC) puts the amount at 27.5 teaspoons of sugar a day per capita, which translates to 440 calories -- nearly one quarter of a typical 2000-calorie-a-day diet.

The key word in all of the stats is "added." While a healthy diet would contain a significant amount of naturally occurring sugar (in fruits and grains, for example), the problem is that we're chronically consuming much more added sugar in processed foods, generally in the rapidly absorbed form of fructose.

That's an important clarification because our brains need sugar every day to function. Brain cells require two times the energy needed by all the other cells in the body; roughly 10% of our total daily energy requirements. This energy is derived from glucose (blood sugar), the gasoline of our brains. Sugar is not the brain's enemy -- added sugar is.

Research indicates that a diet high in added sugar reduces the production of a brain chemical known as brain-derived neurotrophic factor (BDNF). Without BDNF, our brains can't form new memories and we can't learn (or remember) much of anything. Levels of BDNF are particularly low in people with an impaired glucose metabolism--diabetics and pre-diabetics--and as the amount of BDNF decreases, sugar metabolism worsens.

In other words, chronically eating added sugar reduces BDNF, and then the lowered levels of the brain chemical begin contributing to insulin resistance, which leads to type-2 diabetes and metabolic syndrome, which eventually leads to a host of other health problems. Once that happens, your brain and body are in a destructive cycle that's difficult if not impossible to reverse.

Research has also linked low BDNF levels to depression and dementia. It's possible that low BDNF may turn out to be the smoking gun in these and other diseases, like Alzheimer's, that tend to appear in clusters in epidemiological studies. More research is being conducted on this subject, but what seems clear in any case is that a reduced level of BDNF is bad news for our brains, and chronic sugar consumption is one of the worst inhibitory culprits.

Other studies have focused on sugar’s role in over-eating. We intuitively know that sugar and obesity are linked (since sugar is full of calories), but the exact reason why eating sugar-laden foods seems to make us want to eat more hasn’t been well understood until recently.

New research has shown that chronic consumption of added sugar dulls the brain’s mechanism for telling you to stop eating. It does so by reducing activity in the brain’s anorexigenic oxytocin system, which is responsible for throwing up the red “full” flag that prevents you from gorging. When oxytocin cells in the brain are blunted by over-consumption of sugar, the flag doesn’t work correctly and you start asking for seconds and thirds, and seeking out snacks at midnight.

What these and other studies strongly suggest is that most of us are seriously damaging ourselves with processed foods high in added sugar, and the damage begins with our brains. Seen in this light, chronic added-sugar consumption is no less a problem than smoking or alcoholism. And the hard truth is that we may have only begun to see the effects of what the endless sugar avalanche is doing to us.

For more on this topic, click here to watch an excellent piece from 60 Minutes: "Is Sugar Toxic?"
at 11:40 AM