From the Parents Section of www.HuffingtonPost.com

"The French have a very idiosyncratic view of autism and, for some reason, they are not convinced by the evidence."

In most developed countries, children with autism are usually sent to school where they get special education classes. But in France, they are more often sent to a psychiatrist where they get talk therapy meant for people with psychological or emotional problems.

Things are slowly changing, but not without resistance. Last month, a report by France's top health authority concluded there was no agreement among scientists about whether psychotherapy works for autism, and it was not included in the list of recommended treatments.

That provoked an outcry from psychiatrists. Groups including Freudian societies, the World Association of Psychoanalysis and France's Child Institute started a petition calling on the French government to recognize their clinical approach, focused on psychotherapy.

"The situation in France is sort of like the U.S. in the 1950s," said Dr. Fred Volkmar, a U.S. expert who directs the Child Study Center at Yale University. "The French have a very idiosyncratic view of autism and, for some reason, they are not convinced by the evidence."

Behavioral methods, which focus on helping autistic children communicate with others and develop social skills, are the norm in Britain, Canada, Japan, the U.S. and elsewhere in Europe. But they're seldom used in France.

France has long been criticized for its approach to treating autism. In 2002, the charity Autism Europe lodged a complaint against France with the Council of Europe, charging the country was refusing to educate autistic children, as required under the European Social Charter.

The charge was upheld and the European Committee of Social Rights declared "France has failed to achieve sufficient progress" in educating autistic children. The committee also slammed France for making autistic people "an excluded group" and said there was a chronic shortage of care.

Volkmar said some forms of psychotherapy might be helpful for high-functioning autistic children to handle specific problems like anxiety, but should not be considered a first-line treatment. He said the vast majority of autistic children in the U.S. – more than 95 percent – attend school.

"French children with autism are lagging far behind. According to government data, fewer than 20 percent of autistic children attend school..."

But French children with autism are lagging far behind. According to government data, fewer than 20 percent of autistic children attend school. Mostly they're either kept at home or go to a day hospital for psychiatric sessions.

Many French experts insist psychotherapy is essential. "I would never say that psychoanalysis is `the best' method, but it is invaluable," said Marie Dominique Amy, president of CIPPA, a French association of psychotherapists and psychiatrists. She said even in autistic children who don't speak, the therapy can be done through gestures and interpreting their body language.

Amy said she had nothing against behavioral methods, which could be included in a comprehensive treatment program. But she said it was impossible to accept the assessment from France's top health authority that there was no consensus for the use of psychotherapy for treating autism.

Amy also said she had seen autistic children improve after being treated with a controversial therapy known as "packing." That involves wrapping nearly naked children in wet, cold towels in an attempt to "reconnect" them with their bodies. The practice is rare, but is allowed in France as part of research projects. Amy said she had seen autistic children start talking, writing and drawing after the sessions. She said it was essential to get parents' permission before trying packing.

According to the French Association of Psychiatrists, packing can sometimes produce "spectacular" results. The group said more autistic children in France could benefit from the method if authorities did not so tightly regulate its use.

"Not only is there no evidence that packing works, but it's unthinkable something potentially dangerous and harmful would be performed on vulnerable children."

Others condemn the practice as barbaric. "Not only is there no evidence that packing works, but it's unthinkable something potentially dangerous and harmful would be performed on vulnerable children," said Tony Charman, chair of autism at the Institute of Education in London.

Catherine Consel was horrified when she and her husband found out their autistic son Thomas, now 20, had been subjected to regular packing sessions for three years while he was treated in a Bordeaux hospital. "I was shocked," Consel said. "We trusted the doctors to take care of him." Consel and her husband found out about the packing sessions by chance years later, after Thomas' hospital was featured in a television story about the technique. 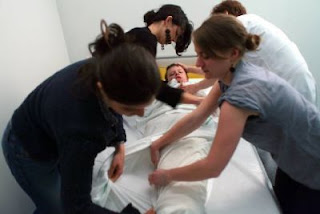 She and her husband later demanded Thomas' medical records, where psychiatrists wrote that his autism was the result of his parents' mental problems. "It was very difficult to read what (Thomas) had been subjected to," she said of the packing sessions. "They noted it all very precisely, how long it had taken and how he had screamed and cried," she said.

Consel is convinced Thomas would have fared better had the family stayed in the U.S., where he was born. "There is only one way to do things in France," she said. "And sometimes the government makes the wrong choice."

Elsewhere in Europe, packing is unheard of and even psychotherapy is rare.

In Spain, for example, autism treatment guidelines published in 2006 lumped psychotherapy together with alternative therapies like chelation, which involves the injection of chemicals into the body to remove heavy metals. Spanish officials ruled there was no evidence such alternative treatments work.

"To be exposed to psychoanalytic treatment is a painful and unethical way of treating children with autism."

Joaquin Fuentes, a psychiatrist and scientific adviser for a Spanish autism group, said that where he works in the Basque region, autistic children go to regular schools and none are sent to psychiatric hospitals. "To be exposed to psychoanalytic treatment is a painful and unethical way of treating children with autism," he said.

Some French parents resort to sending their children abroad to get adequate treatment. When Andy Beverly's son Guillaume was diagnosed as autistic at age 2, Guillaume began to receive treatment from psychiatrists in Paris.

"They said his autism was a psychosis and that Guillaume needed to figure out himself how to get over it," Beverly said. After years of sporadic schooling in France, Beverly sent Guillaume to a school in Belgium that focuses on techniques to help him interact with others and do simple things like putting on his coat. He is convinced that Guillaume, now 15, would be more advanced if he'd gotten better treatment as a child.

"I started out having a lot of trust in the French doctors, but it was only later that I realized we were in the wrong country," Beverly said. "The situation may finally be getting better, but for a lot of families with autistic children, that's not enough."
at 1:19 PM