Heading Into Brain Injury – Should We Be Concerned?

"... it is recommended that proper heading techniques should be employed to minimize energy transfer to the brain."

Like any other sports fanatic, nothing else evokes a greater wave of emotional outbursts from me than a really good game. Whether I am watching a speedy game of basketball or a crawling game of baseball, feelings of celebration, anxiety, and disappointment can billow through my body within the span of a few seconds. In June, the UEFA Euro 2012 was all the rage amongst sports fans, causing many professionals to cancel work meetings, return late from lunch breaks, or simply remain home on the grounds of an “unidentified but completely legitimate sickness”.

As I was one of those many individuals crowding around a large food court flat screen, milking the last few seconds of my fifth (and very necessary) break, I could not help but cringe every time I witnessed a player heading a soccer ball. 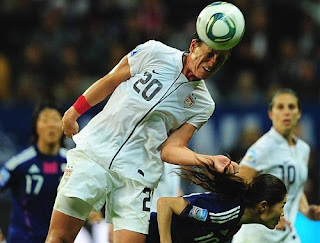 Because I work in trauma research, I have become very familiar with cases of chronic traumatic encephalopathy (CTE) in professional athletes. CTE is a progressive neurodegenerative disease that can only be diagnosed post-mortem in individuals who have suffered from repetitive head trauma. Gross pathological findings of CTE include reduced brain weight, enlarged lateral and third ventricles, thinning of the corpus callosum, cavum septum peallucidum with fenestrations, scarring, and neuronal loss of the cerebellar tonsils. The disease has been closely tied to athletes who participate in contact sports like boxing, martial arts, American football, professional wrestling and hockey.

Although CTE cannot be verified until post-mortem, those who do suffer from the disease have been reported to lead difficult lives. Take for example, the case of Andre Waters, a retired NFL player who took his life in 2006 at the young age of 44. Prior to his untimely death, Waters manifested a history of cognitive and neuropsychiatric impairments which included chronic depression, suicide attempts, insomnia, paranoia, and impaired memory.

Even more concerning was that this was not the first reported incidence of CTE in a retired NFL player. Previous cases had also documented mental disorders in these subjects, including depression, deficits in memory and judgment, and Parkinsonian symptoms.

Despite years of mass media coverage criticizing the impact of head-jarring sports on the brain, the concern for “heading” in soccer players have only recently surfaced. Heading is a technique unique to the sport whereby players use their unprotected heads to deflect, stop, or redirect the ball for both offensive and defensive purposes.

In November, 2011, researchers from the Albert Einstein College of Medicine in New York reported that professional soccer players who frequently “head” the ball (approximately 1000-1500) times a year may develop changes in the brain analogous to those with mild traumatic brain injury (mTBI).

"...professional soccer players who frequently “head” the ball (approximately 1000-1500) times a year may develop changes in the brain that are analogous to those with mild traumatic brain injury (mTBI)."

The researchers tested two groups of soccer players: frequent headers versus non-frequent headers based on their responses to a detailed and standardized questionnaire. An advanced magnetic resonance technique known as diffusion tensor imaging (DTI) was used to measure microscopic changes in the brain’s white matter.

In healthy white matter, the direction of water movement is fairly uniform whereas previous studies have associated mTBI with disruption of this uniformity. The investigators found that frequent headers had significant disruptions in uniformity in the frontal, temporal, and occipital regions compared to infrequent headers.

In fact, there has been one publically reported case of a “formidable header” who died in 2002 from a degenerative brain disease. Jeffrey Astle, a legendary figure in England who peaked in his career in the 1960s was found to have histological changes in his brain consistent with CTE. These deformities lead the coroner to conclude that minor repetitive trauma was the cause of his death and a verdict of ‘‘death by industrial disease” was documented.

Where do these reports leave soccer moms and their maternal duty to protect their children’s mental capacity? Before anyone jumps into panic mode, let us review the evidence thus far. First, researchers have reported that frequent headers may develop changes in the brain that are similar to those with mTBI. However, this statement should be interpreted with caution as the study had a small sample size (n=38), only 25% were women with no children included, and the number of “heads” per year were based on retrospective self-report by the participants.

Second, Jeffrey Astle succumbed to a “death by industrial disease”. However, the leather balls used during his career were much heavier and could easily absorb moisture over the course of a game, adding as much as 20% extra weight. If we recall Newton’s second rule of force = mass x acceleration, then the force of impact between the ball and the player’s cranium should be dependent on the mass of the ball (i.e. the greater the mass, the greater the force impacting a player’s head). Today, the balls used are much lighter and made entirely of synthetic, hydrophobic material.

"However, there is little evidence to prove that heading in today’s soccer can lead to CTE, and the research conducted so far is certainly insufficient to support the ban of heading altogether."

There is no denying that repetitive impact to the head can have cumulative detrimental effects that may lead to long-term psychological consequences. However, there is little evidence to prove that heading in today’s soccer can lead to CTE, and the research conducted so far is certainly insufficient to support the ban of heading altogether. Until then, it is recommended that proper heading techniques should be employed to minimize energy transfer to the brain.

Still, I cannot help but twitch every time I witness the ball impact a player’s head. I fear that repetitive heading may only become clinically evident decades into the future—when it has already become too late for our generation now.

Amy Wong, MS, is a medical writer and conducts traumatic brain injury research in a large academic institution. She holds a Master’s of Science from the University of Toronto in the department of Pharmacology. Her studies pertained to the selective field of neuropsychopharmacology, examining the biological implications of post-stroke depression.