It is time for Universal Design for Learning to be put in the hands of every student. Every student should given the opportunity to discover and experiment with a range of tools which can support their individual differing communications needs – not just in school, but throughout their lives.

Schools, traditionally, have provided students one way to do things. If the class was supposed to read something, everyone had the same technology – paper with alphabetical symbols printed on it which students needed to “decode.”

If students could not function well with that “one way” they either failed, or were diagnosed as being “disabled” and were prescribed a different “one way” to work – a way which would set them apart from their peers forever.

Though in schools around the world we still see this pattern, it is now deep into the second decade of the 21st Century and the technologies and realities of the world have changed. All around the planet people carry with them – often in their pockets – highly individualizable devices which can support all the different ways humans learn and communicate. And it is time for schools to catch up with this reality.

The new and improved Freedom Stick (v.2.3.2) offers students and schools the ability to arrive at this ‘technological present’ at essentially zero cost.

One free [downloadable package of software] allows students the ability to make almost any computer a fully accessible device. Students can convert text to audio, get their ideas down by speaking, They can draw, manipulate photography, create visual or audio-visual presentations, calculate mathematics a variety of ways, organize themselves, try a different keyboard, support their spelling and writing… and most importantly, learn the power of “Toolbelt Theory” - the power of learning to choose and use tools well.

The Freedom Stick is a system that can be downloaded and installed on a 4GB flash drive and carried everywhere by the student, plugged into and used on school or public library computers, or even employer's computers – anywhere any version of Microsoft Windows is installed (including on Apple Macintosh computers which can have Windows installed as a second operating system).

Or, it can be installed directly onto your own computer. It is safe in all computing environments, having been tested globally since development began in Scotland with EduApps. This version was developed with U.S. Department of Education and Michigan Department of Education grants through Michigan’s Integrated Technology Supports (MITS), to bring Universal Design Technology to American schools.

The Freedom Stick is a collection of free, open-source programs which provide the widest range of supports for differing student needs. It is also a system supported by a range of learning tools – including a full set of “how to use” videos and presentations. It is easy to adapt to the students own needs, and it works with the supports included in Windows to create a true Universal Solution Set. 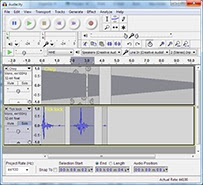 We all know that students with dyslexia and other learning disabilities struggle in school and in life because of what I call “Transactional Disability,” a mismatch between the information and communication technologies in use and the technology needs of these students.

The Freedom Stick begins to solve this by offering choices of how to interact with information and communication to any student. Students not only get access, they begin to learn how to make their world accessible, building skills which will carry them through their lifespan. As they learn to choose and adapt the software on the Freedom Stick they will discover how to evaluate and choose the tools they will use on computers and phones no matter how they, their needs, or the technologies, change in the future.