Children with dyslexia can read faster and more accurately when letters in text are more widely spaced, showing an immediate improvement equal to a year’s worth of classroom instruction, Italian and French scientists reported Monday.

In a series of experiments, children diagnosed with the common reading disorder could read 20% faster and twice as accurately when reading text with extra-large letter spacing, the researchers reported in a study in the Proceedings of the National Academy of Sciences.

“We found that when reading the widely-spaced text the number of errors was about half. The increase in speed was notable. It corresponds to the increase you would see after one year of schooling.”

“We found that when reading the widely-spaced text the number of errors was about half,” cognitive scientist Marco Zorzi at the University of Padua, who led the research group, tells the Health Blog. “The increase in speed was notable. It corresponds to the increase you would see after one year of schooling.” 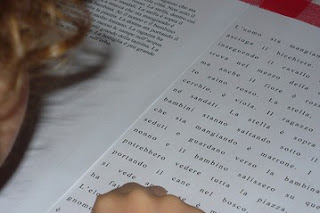 Their finding highlighted the scientific importance of typography in easing dyslexia. It could have immediate practical applications because it is so easy to alter the characteristics of text, such as type size, font, and spacing in computer word-processing software and in electronic books, the researchers said.

In all, researchers at the University of Padua in Italy and at Aix-Marseille University in France tested 74 children diagnosed with dyslexia by having them read sets of 24 sentences in their native French or Italian printed with standard spacing or with extra-wide spacing, which made the letters less crowded.

Everyone is susceptible to the differences in spacing between letters. Reading speed in skilled readers is usually slowed down when letter spacing is doubled, and most typography design takes that into account.

For dyslexic children, however, the standard spacing that works so well for skilled readers may seem crowded, causing them to take longer to translate the letters into sounds and to make more mistakes deciphering them because the typographical features of characters blend together.

“When you increase the letter spacing, the reading improves on the fly,” says Padua neuropsychologist Andrea Facoetti. The increase in reading speed worked out to about one-third of a syllable per second.

Moreover, the simple change in the visual appearance of text improved reading among dyslexic children whether the text was in French or in Italian, suggesting it may hold true for any language that uses the alphabet.

While the two languages use the same letters, they treat spelling differently. In French, one letter can represent different sounds depending on its context and the word in which it appears, in much the same way as in English. In Italian, each letter always stands for the same sound.

To allow people to conduct their own experiments, the researchers have introduced a free iPhone and iPad app called DYS.

The interactive application allows people to tinker with the spacing between letters to find the one that most enhances their reading performance, compared to standard spacing.

The app allows users, if they choose, to share their findings anonymously with the researchers.
at 7:45 AM