From the Green Section of www.HuffingtonPost.com

While pregnant with her son Edgar, Melissa Wolfe followed the lead of many a cautious woman before her. She took prenatal vitamins and ate organic vegetables. She avoided dyeing her hair and using hairspray. She even went as far as to leave the kitchen whenever someone turned on the microwave.

"I was very vigilant. Perhaps a little crazy," said Wolfe, of Brentwood, N.H. 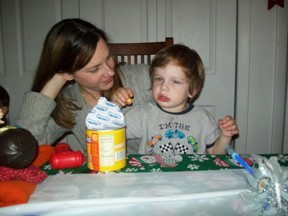 Yet Wolfe still fears that her 4-year-old's autism may have resulted from chemicals infiltrating her womb, whether components of her migraine medicine, contaminants brought home from her husband's work installing rubber flooring, or remnants of the remodeling the couple did on their house.

The remodeling "created even more chemicals that I was breathing while pregnant," she said. Wolfe also wonders if her father's exposure to Agent Orange during the Vietnam War, which the government has now blamed for his prostate cancer, might be somehow connected to her son's disability.

To date, science has not directly linked any of these environmental exposures with any of the disabling behavioral and cognitive conditions that fall along the autism spectrum. But rising rates of autism along with the increasing breadth and reach of synthetic chemicals -- some of which are known to be toxic and most of which we know near nothing about -- raises questions for which scientists are beginning to offer a few answers.

As the U.S. Centers for Disease Control and Prevention (CDC) reported in April, autism now affects an estimated one in 88 kids. Among boys, the burden is even higher: about one in 54. And the ramifications of the rise go beyond the child, the family and even the school. In decades to come, individuals with autism are now expected will account for one in 88 adults, meaning society will pay the price in terms of lifetime care and other medical expenses. All told, managing autism already costs the country $35 billion a year.

"While studying genes might help us identify diagnostic tests, which can make you a profit, it will not lead us towards preventing disease," said Bruce Lanphear, an environmental health researcher.

Researchers sense the urgency. Many are now investigating factors that might help curb the epidemic. This generally means looking beyond genetics, the avenue of investigation that has consumed most of the government's funds and researchers' time over the last several years.

"While studying genes might help us identify diagnostic tests, which can make you a profit, it will not lead us towards preventing disease," said Bruce Lanphear, an environmental health researcher at Simon Frasier University in British Columbia. He pointed to lung cancer as a case in point: All the genetic links in the world amount to little compared to the role of smoking cigarettes, and therefore encouraging people to abstain is medicine's single most effective response.

It's also increasingly clear that genetics can't tell the whole story of autism. A Stanford University study of twins published last year found that genetics accounts for just 38 percent of the risk.

"That analysis suggested that the assumption that this is mostly a genetic condition was perhaps made in error," said Diana Schendel. "Maybe the environment plays a larger role in autism than we once believed."

"That analysis suggested that the assumption that this is mostly a genetic condition was perhaps made in error," said Diana Schendel, a scientist with the CDC's National Center on Birth Defects and Developmental Disabilities. "Maybe the environment plays a larger role in autism than we once believed."

Schendel, who is involved in a large study looking at possible risk factors during a child's early development, doesn't expect to find one smoking gun. Like other experts in the field, she thinks a cocktail of chemical insults on top of genetic susceptibility is likely to blame for each case of autism.

Drugs used decades ago to treat morning sickness, bipolar disorder and ulcers, as well as the insecticide chlorpyrifos, have already been tied to autism. With about 80,000 chemicals available for industry use, most of which remain untested for toxicities, researchers have plenty more potential culprits to investigate. A study spearheaded by the advocacy organization Environmental Working Group found an average of 200 industrial chemicals in the umbilical cord blood of 10 babies born in U.S. hospitals in 2004.

Such figures have raised alarms given the host of health problems on the rise among kids, including diabetes, obesity, asthma and cancer. Growing children are extremely sensitive to chemicals, even at very low doses. And of all the developing organs, the brain may be the most vulnerable. The time window for a chemical to wreak havoc extends from the early embryo all the way through adolescence, when the brain finally matures.

"The brain goes through rapid changes, all complex and all easily disrupted," said Dr. Philip Landrigan, chairman of the department of preventative medicine at the Mount Sinai School of Medicine in New York City. "Take a Swiss watch and multiply that by 1,000."

In April, Landrigan co-authored a report that highlighted 10 widely used chemicals and mixtures of chemicals that are suspected of harming the developing brain, including lead, methylmercury, organochlorine pesticides, endocrine disruptors such as bisphenol-A and phthalates, automobile exhaust, and flame retardants.

Recent research by Irva Hertz-Picciotto, an autism expert at the University of California, Davis, supports the list. She has found hints of links between autism and proximity to freeways, pesticides and a parent's occupational exposures, as well as nutrition.

The latter study was the first to illustrate how genes and the environment might interact to trigger the disease. "Children who inherited unlucky genes that made them less efficient at utilizing and metabolizing the folic acid of prenatal vitamins had a five- to seven-fold higher risk of autism," Hertz-Picciotto said.

Next up for her team: agricultural chemicals and possibly bisphenol-A.

Other research published over the past few months has added evidence that flame retardants and polychlorinated biphenyls (PCBs), as well as some factors more broadly considered environmental such as a mother's diabetes or fevers during pregnancy, might be implicated in autism and other learning disorders. Several more ongoing studies are looking into social factors, medications taken during pregnancy, and infections.

"We are so many years away from having the answers, but we are far closer to a tsunami of young autistic men in our communities, getting assaulted, assaulting others," said Donna Ross-Jones of Los Angeles, who blogs about life as the mother of a 14-year-old boy with autism. "When we look at the impact on housing and employment, on society, it's pretty scary. This is not like a small group we can put in a closet."

Generalizing about the members of this afflicted group is difficult. Ask 100 different parents of children with autism, and you'll likely get 100 different descriptions of the condition, its challenges and its causes.

Edgar Wolfe, for example, may have a lot of autistic behavior patterns, such as slapping his hands and talking to himself, but his mom noted that he has no problem making eye contact and talking with other people. Nicholas "Nicky" Ross-Jones, on the other hand, "can't carry on a typical conversation with you," said his mom, "yet he can break into your computer and break past your firewall."

Donna Ross-Jones still wonders if the mercury tooth filling she received early in her pregnancy could have put her child at increased risk. "I'm certain it was environmental," she said. "But what all those factors were, I don't know. I do believe they are the realities of a poisoned planet, perhaps not necessarily just one chemical but an onslaught."

That same line of reasoning is why autism experts like Mount Sinai's Landrigan aren't waiting until they find answers in their labs before pushing for regulatory reform.

"We need to reform the Toxic Substances Control Act," said Landrigan. "The present legislation is obsolete and is not working. It's just creating a situation which is dangerous for America's children."

As The Huffington Post reported earlier this week, children's health experts and advocates are urging Congress to retire the 1976 Toxic Substances Control Act and replace it with the more rigorous and precautionary Safe Chemicals Act, which currently awaits a Senate vote.

"We need to reform the Toxic Substances Control Act," said Landrigan. "The present legislation is obsolete and is not working. It's just creating a situation which is dangerous for America's children."

On Tuesday, Melissa Wolfe was among 200 moms in Washington, D.C., pressing senators to push back against industry opposition and pass the Safe Chemicals Act. Like many other parents, Wolfe finds it difficult to keep toxic chemicals away from herself and her family. She knows that products often contain unlisted ingredients, such as the chemical make-up of the fragrance in a "fresh-baked apple pie candle," she said.

"I just want to wrap my kids in bubble wrap," added Wolfe. "But then I say, 'What is in the bubble wrap?'"

Lynne Peeples is the environment and public health reporter at The Huffington Post. She has written for Scientific American, Audubon Magazine and Reuters Health, among other science outlets, as well as crunched numbers as a biostatistician at Harvard.
at 6:20 AM