Daily or Severe Tantrums May Point to Mental Health Issues

Most young children lose their temper sometimes, but daily tantrums or tantrums with severe behaviors, such as aggressive or destructive tantrums, are unusual and could signal a larger problem, according to an NIMH-funded study published online August 3, 2012, in a special issue of the Journal of Child Psychology and Psychiatry.

Distinguishing “normal” misbehaviors of early childhood from clinically worrisome problems can be challenging for pediatricians, parents, and others who work with young children.

To address this issue, Lauren Wakschlag, Ph.D. of Northwestern University, Margaret Briggs-Gowan, Ph.D. of University of Connecticut Health Center and their colleagues examined temper loss among preschoolers as a spectrum of behaviors ranging from mild or normal to “problem indicators” that may be signs of a greater, underlying mental health issue. 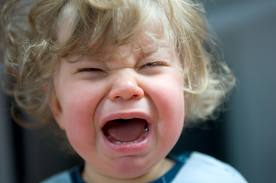 For this study, the researchers developed the Multidimensional Assessment of Preschool Disruptive Behavior (MAP-DB) questionnaire. Rather than merely asking whether a child had tantrums or not, the MAP-DB assesses the frequency, quality, and severity of behaviors related to temper tantrums and the extent of a child’s anger management skills over the past month. Parents of almost 1,500 preschoolers, ages 3-5, took part in the study.

Results of the Study

The researchers found that more than 80 percent of preschoolers had one or more tantrums in the past month. However, less than 10 percent had tantrums every day. Also, normal temper loss behaviors showed similar patterns and could be reliably distinguished from problem indicators.

For example, over a one month period, tantrums typically occurred:
In contrast, it was less typical for preschoolers to have a tantrum:

The findings provide early evidence that studying behaviors as a spectrum may provide new insights into how mental disorders develop and better target early diagnosis, prevention, and treatment.

“Our goal was to provide a standard method that would take the guesswork out of ‘when to worry’ about young children’s behavior..."

“Our goal was to provide a standard method that would take the guesswork out of ‘when to worry’ about young children’s behavior and to provide a more developmentally sensitive way of characterizing the emergence of mental health problems, moving away from traditional approaches emphasizing extreme clinical distinctions to a dimensional approach that charts a progression from normal to abnormal,” said Wakschlag.

Further research is needed to confirm and evaluate the effectiveness of the MAP-DB questionnaire in identifying the point at which very young children would benefit from more specialized mental health screening and treatment. Changes in behavior as the child ages and whether problematic behaviors in early childhood lead to greater mental health issues later in life are also important areas for future study.