How Parents' Stress Can Hurt A Child from the Inside Out

From the Forbes Magazine Blog Forbeswoman

If you’re a parent, you may have seen your stress level in your child’s eyes, or perhaps you’ve seen it played out in his or her behavior. If you’re not a parent, you may remember the feeling of delight at your own parents’ happiness, or the devastation when you sensed that they were not OK. Children are sponges, after all – and we all know this intuitively. And there’s a small but intriguing body of evidence suggesting that beyond a child’s disposition, a parent’s stress level can affect a child’s very makeup, including his or her risk of mood disorders, addiction, and even disorders like ADHD and autism.

It’s not the most popular area of research, for obvious reasons, but it’s well worth looking into.

David Code, who wrote the book Kids Pick Up On EVERYTHING: How Parental Stress Is Toxic To Kids, has made a career of pulling together the evidence from a handful of labs around the world, which have suggested that parents’ levels of chronic stress can seriously impact a child’s development. There’s no time when parental stress doesn’t affect a child, but it seems to be particularly damaging when stress occurs during pregnancy. And it may affect a child’s developing brain all the way to the genes.

The Chemicals In Utero

Research has linked stress in a pregnant woman (termed antenatal stress) to several types of developmental problems in kids, including anxiety and ADHD. Some studies have also found connections between antenatal stress and the risk for autism spectrum disorder (ASD).

For developmental and neurological disorders, while there are almost certainly genetic factors at play, it is possible that environmental factors (like the environment in utero) may be a contributing factor. One mechanism appears to be maternal levels of the stress hormone cortisol, triggering the fetus’ brain to develop differently as it tries to adapt to the apparent impending “threats.” This is known as the Predictive Adaptive Response.

Code explains it like this: “If a woman is experiencing significant stress while she’s pregnant, the stress hormones are coming across placenta hard and fast. The fetus’ developing brain receives this signal – and interprets it to mean that there must be serious stresses in the environment. As a result, it prepares itself for what it thinks will be threats to come.”

In other words, getting the stress “cues” from the mother’s own hormones, the fetus is essentially readying itself for what must lie ahead. But if a child’s developing brain ramps up the stress-response too much, this may play out in a heightened risk for disorders like ADHD and ASD.

The types of stresses we experience now are categorically different from the ones we experienced over evolutionary history. Code points out that “3,000 years ago, the mother-child stress connection might have been adaptive, but now we’re seeing totally different types of maternal stress. Stress is more likely to be chronic now, and you end up with kids whose brains are overly primed for stress, always metaphorically scanning the horizon for threats.”

This could, the argument goes, be one mechanism (though there are surely others) behind the upsurge in mood and developmental disorders in recent years.

The brain changes that stress can cause are not only hormonal, they can also be genetic – or “epigenetic,” which is a burgeoning area of research. Epigenetics is the study of how genes can be turned on or off with certain environmental cues, stress being one of them. One study last year found that when parents are significantly stressed during their child’s first few years of life, some of the children’s genes – involved in insulin production and in brain development – were affected even years later, in adolescence. 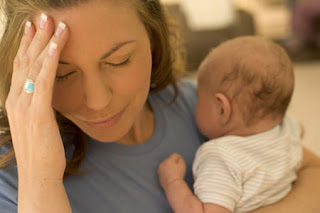 “This seems to be the first demonstration, using carefully collected longitudinal data, that parental adversity during a child’s first years leads to discernible changes in his or her ‘epigenome,’ measurable more than a decade later,” said author Michael Kobor. “This literally provides a mechanism by which experiences ‘get under the skin’ to stay with us for a long time.”

"...parental adversity during a child’s first years leads to discernible changes in his or her ‘epigenome,’ measurable more than a decade later. This literally provides a mechanism by which experiences ‘get under the skin’ to stay with us for a long time.”

So pregnancy isn’t the only time that parental stress can affect the development of the offspring – the relationship continues right through childhood. Animal studies have suggested similar ways in which maternal stress level can affect the offspring’s behavior and ability to cope with stresses, right down to the genes. There is a famous series of experiments by Michael Meaney at McGill University, in which rat mothers with low stress levels, who spent a lot of time licking and grooming their pups, had pups who were calmer and more exploratory than rat pups who only got licked a little (there’s a great synopsis of the studies here). And this difference lasted throughout the pup’s lifetimes.

But the most intriguing part is that the rat pups of “minimal-licking” mothers who were then cross-fostered to “frequent-licking” moms ended up with the behavioral makeup of their new foster moms. And amazingly, these differences went all the way down to the genes in rat pups’ brains, with certain regions being activated or deactivated (again, epigenetics), depending on what kind of rearing they’d had. These changes in their brains, spanning the gamut from genes to behavior, seem to stick with the animals for life.

This line of reasoning takes us to some illuminating-but-unethical experiments done by Harry Harlow some 50 years ago. Harlow observed baby monkeys as they were raised by either of two surrogate mothers – one was a wire monkey mannequin covered in soft terry cloth, the other simply made of bare, uncovered wire. Not surprisingly, when they had a choice, the baby monkeys always chose the terry cloth mother, even when the wire mother was the one that provided milk. But when they didn’t have a choice, the babies “raised” by the terry cloth-covered mother vs. the wire mother were stunningly different. When the ones raised by cloth surrogates were startled by outside stimuli they ran for the comfort of their “mothers.”

But when the other group – the monkeys raised by wire surrogates – were startled they did not seek comfort from their “mothers” – they cowered on the floor, or held themselves and rocked back and forth. It was as if they had never had a mother at all, which of course was essentially the case.

These findings led the researcher, Harlow, to make lots of conclusions about the nature of love, like, “Love is an emotion that does not need to be bottle- or spoon-fed,” and, “Man cannot live by milk alone.” Whether the experiments are about love at all – or whether they’re about what the offspring “read” in their mother’s behavior – is the more important question.

Code suggests the most critical thing that we can transmit to our kids is not our ever-present, undying love – it’s actually to provide them with a sense of calm and the absence of stress, which he says may be more powerful than declarations of love. This is what will ultimately help their growing brains wire normally, without having to accommodate for some vague sense of impending danger as they develop, which may or may not exist.

Code even argues that in the famous rat experiments, what’s being transmitted from mother to pup is not love, it’s peace: “By spending a lot of time grooming her pups, the mother rat is saying to them, ‘times are so good and predator- and stress-free that I have lots of time to lick you guys.’” The same logic applies to humans.

As Code tells me, “My goal with my own kids is not to tell them I love them every six minutes of the day and helicopter-parent them so they know I’m present. It’s to create calm around them so that they feel no sense of threat.”

“My goal with my own kids is not to tell them I love them every six minutes of the day and helicopter-parent them so they know I’m present. It’s to create calm around them so that they feel no sense of threat.”

And creating a stress-free (or low-stress) environment should start with the parents, and their relationships with each other, friends, and family. Many people mistake that, says Code, and errantly pour their energy into helicoptering their kids. There’s another body of evidence suggesting that over-parenting leads not only to stress and depression in the parent, but it does a disservice to kids by taking away the very thing they need the most – the freedom to be kids, to play, and to develop as they will.

“We [parents] have to get back to being social. For example, I have never seen toddlers more satisfied or happy or fulfilled than when their parents are blabbing away with each other or with friends on the couch,” he adds. “It’s social grooming – our equivalent of the rat mothers licking their pups.” This bubbling, happy prattle of parents talking with each other is music to a kid’s ears. It’s how they know times are good, and no threats are present. The brain is saying to itself, “If mom or dad is happily yacking away while I play, then times must be good. No need to pump any stress hormones or turn the stress genes on here.”

“Humans have forgotten that we’re social animals,” adds Code. “We’re programed to bond. We mistakenly believe that virtual social networks are our new community, but these pale in comparison to chats on the street, gossip on the phone, or even happy hour after work. The two-martini lunch was probably not such a bad thing for our mental health.”

And circling back to the potentially more critical issue of stress during pregnancy, Code says that, “In a perfect world, maternity leave should be from conception to birth. I’d plop pregnant women down in front of Marx Brothers movies, with a group of friends, and maybe even an occasional glass of wine.

“In a perfect world, maternity leave should be from conception to birth. I’d plop pregnant women down in front of Marx Brothers movies, with a group of friends, and maybe even an occasional glass of wine."

Of course, this is not a reality for most, but the point is to make social time an important part of our lives again.” And it’s not to diminish the very real stressors that pregnant women may go through – divorce, death, loss of a job – but to make the case that the seemingly small things in life (coffee with friends, a phone call instead of an email, a night out, or an evening indoors cuddling) can help create a serious buffer to the cascade of deleterious physiological effects that stress brings with it.

Alice G. Walton is a health and science journalist who writes on medical issues. Her areas of interest are the brain and behavior, as well as what influences the decisions we make about our health, and how the media helps and hinders people's understanding of health issues. She holds a Ph.D. in biopsychology and is associate editor of TheDoctorWillSeeYouNow.com.
at 1:22 PM