Meltdown behavior is quite common for those with Autism Spectrum Disorders. And, indeed, the most frequently asked question by parents and educators is: “What do I do when my child has meltdowns?”

When a meltdown occurs, the best reaction is to ensure the safety of all concerned. Know that explosive behavior is not planned, but instead, is most often caused by subtle and perplexing triggers. When the behavior happens, everyone in its path feels pain, especially the child.


So, what exactly is explosive behavior? In my book Outsmarting Explosive Behavior: A Visual System of Support and Intervention for Individuals with Autism Spectrum (Endow, 2009), explosive behavior is defined as having four distinct stages, followed by a clearly defined recovery period. In addition, the physiological fight/flight mechanism is triggered immediately prior to the explosion. 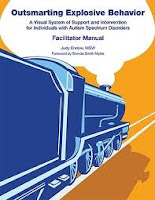 In this model, the four stages of explosive behavior are the same for all experiencing explosive behavior and are depicted by four train cars called Starting Out, Picking Up Steam, Point of No Return, and Explosion. The idea is to try to prevent the train cars from hooking up, because when they do, we have a runaway train that ends in explosion.

Working backwards, the Explosion is the stage where the meltdown behavior is evident. Immediately prior to this is the Point of No Return, which is exactly what it implies — there is no going back from the meltdown because this stage is where the fight/flight response is triggered. The pupils dilate, and breathing and heart rates increase.

Physiologically, our bodies respond as if our very lives are at stake, and we automatically behave accordingly: We fight for our lives. It is entirely impossible to reason with anyone in this survival mode. As soon as you see the child’s identified Point of No Return behavior, you can know the Explosion is coming, and need to do your best to quickly create and maintain a safe environment.

Strategies to Prevent Meltdowns Before They Start

An individual mix of three major supports and interventions is usually most effective in preventing the first stage of meltdown behavior from starting. These three major supports include:
People with ASD usually do not have sensory systems that automatically regulate; instead, they must discover how to keep themselves regulated. This is most often accomplished by employing a sensory diet. A sensory diet for a person with autism is like insulin for a person with diabetes.

It is easy to understand that a person with diabetes has a pancreas that is unable to regulate insulin effectively. We can measure blood sugar and know the exact state of affairs, and then, figure out how much insulin the person needs.

As an adult with autism, I spend time every day on sensory integration activities in order to be able to function well in my everyday life. A sensory diet employed proactively goes a long way in preventing the Starting Out stage of explosive behavior from ever occurring (Brack, 2004).

Visual Supports: Another crucial area of support to put in place proactively is that of visual supports. As an autistic, I can tell you the saying “A picture is worth a thousand words” is the monumental truth. Although each person with ASD has a unique experience, processing written and spoken words is not considered by most of us to be our “first language.” For me, the meaning I get from spoken words can drop out entirely when I am under stress, my sensory system is dysregulated or my emotions are too big.

Visual supports can be anything that shows rather than tells. Visual schedules are very commonly used successfully with many individuals with ASD. Having a clear way to show beginnings and endings to the activities depicted on the visual schedule can support smooth transitions, thus keeping a meltdown at bay.

For maximum effectiveness, visual supports need to be in place proactively rather than waiting until behavior unravels to pull them out.

Managing Felt Emotions: A third area in which many with ASD need proactive support is in managing felt emotions. Most often, felt feelings are way too big for the situation. An example in my life is when I discover the grocery store is out of a specific item; I get a visceral reaction very similar to the horror I felt when first hearing about the 9/11 tragedy. I know cognitively the two events have no comparison and, yet, my visceral reaction is present and I need to consciously bring my too big feelings down to something more workable in the immediate situation.

Managing felt emotions does not come automatically, but can be learned over time with systematic instruction and visual supports such as The Incredible 5-Point Scale (Buron & Curtis, 2004). 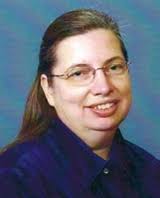 Judy Endow, M.S.W., maintains a private practice in Madison, Wisconsin, providing consultation for families, school districts and other agencies. Besides having autism herself, she is the parent of three grown sons, one of whom is on the autism spectrum. Judy does workshops and presentations on a variety of autism-related issues, is part of the Wisconsin DPI Statewide Autism Training Team and a board member of both the Autism Society of America, Wisconsin Chapter and the Autism National Committee.

In addition, Judy is a member of the Autistic Global Initiative (AGI), a program of the Autism Research Institute. For more information about AGI, please visit www.autisticglobalinitiative.com.

Her first book, Making Lemonade, Hints for Autism’s Helpers (CBR Press, 2006), shows how Judy has used the lemons of her autism to “make lemonade” in her own life. Paper Words, Discovering and Living with My Autism (AAPC Publishing, 2009) was 2010 International Book Award Finalist in Autobiographies/Memoirs.

Judy has also received the 2010 Autism Society Media Excellence Award for her DVD The Power of Words: How we talk about people with autism spectrum disorders matters! (AAPC Publishing, 2009). In addition, she has authored the annual Hidden Curriculum Calendar for Older Adolescents and Adults (AAPC Publishing 2009, 2010). 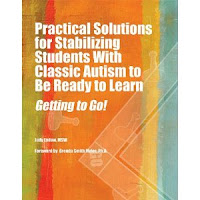 In addition, Judy has authored Outsmarting Explosive Behavior, A Visual System of Support and Intervention for Individuals with Autism Spectrum Disorders (AAPC Publishing, 2009) and Practical Solutions for Stabilizing Students With Classic Autism to Be Ready to Learn: Getting to Go (AAPC Publishing, 2011).

Judy’s newest book, Learning the Hidden Curriculum: The Odyssey of One Autistic Adult, is now available (AAPC Publishing, 2012). She continues to bring a great depth of understanding and compassion to all the work she does.

First printed on Education.com with permission of the Autism Society.
at 7:16 AM