Back-to-School: The Genetics of Learning from Your Mistakes

From The Spittoon - More Than You've Come to Expectorate

For back-to-school month, we (23andMe.com) are running a series of posts on genetic factors that impact learning. Here we describe a variant that may influence a person’s ability to learn from their mistakes. In a prior post, we discuss a variant linked to non-verbal IQ performance.

Why do some people have a hard time learning from their mistakes?

It might have to do with genetics. At least one research study suggests that the tendency to make rewarded choices while avoiding those that receive negative feedback may be influenced by genetics. 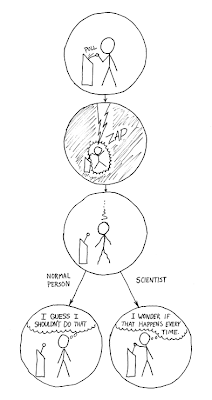 In this study, 26 German individuals took a test that assessed their ability to prefer “correct” choices and avoid “incorrect” ones. The authors genotyped the subjects at the SNP rs1800497, which is thought to affect a gene involved in dopamine signaling. The neurotransmitter dopamine is involved in trial-and-error learning and variations in genes related to dopamine signaling may affect a person’s ability to learn.

People with the GG genotype at rs1800497 learned to avoid choices associated with negative feedback relatively easily, while people with the AG or AA genotypes did not learn as well to avoid these “punished” choices; in other words, they did not learn from their mistakes. The AG and AA genotypes have also been correlated with up to a 30% reduction in dopamine receptor density in a region of the brain known as the striatum.

(Rs1800497 is commonly referred to in the scientific literature as the DRD2 TaqIA polymorphism. The A version of rs1800497 is equivalent to the A1 allele of DRD2 TaqIA, while the G version of the SNP corresponds to the A2 allele.)

If you’re looking for a genetic excuse, this is a good one to point to. The next time your spouse is amazed that you left the house again without your phone … or house keys … just say that you’re genetically predisposed to not learn from your mistakes.

The results presented here were obtained with a very small sample size and have not been independently replicated. While the results are intriguing, it’s important to realize that learning is an extremely complex behavior that is also strongly influenced by environment.

Genetic Differences in Dopamine Receptors and Effect on the Brain

In a more recent study by the same researchers, 28 German males performed a similar learning task except partway through the experiment the “correct” choice was reversed — the one that used to be right was now wrong. The scientists found that people with at least one A at rs1800497 had a hard time consistently choosing the “correct” response after the reversal even if they had just chosen and been rewarded for that response. Perhaps not surprisingly, the behavior seemed to correlate with differences in brain activity. 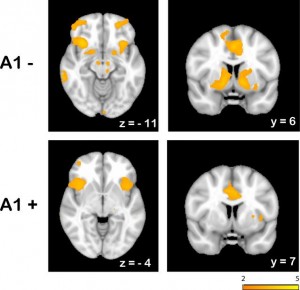 The researchers imaged the participants’ brains (with functional magnetic resonance imaging, or fMRI) while they performed the task and saw more signal in GG individuals (A1- in the figure) compared to AG and AA people (A1+ in the figure) in parts of the striatum and ventral midbrain where dopamine receptors are located. A similar correlation between reduced brain activity in dompinergic regions of the brain and impaired ability to “learn from mistakes” was also observed in the original study. Figure from: J Neurosci. 2009 March 25; 29(12): 3695–3704.
at 8:52 AM