From the Centers for Disease Control and Prevention

This increase indicates a serious health problem. Future research should focus on understanding risk factors, changes in acceptance and awareness of conditions, and benefits of early intervention.

Researchers from the Centers for Disease Control and Prevention (CDC), in collaboration with researchers from the Health Resources and Services Administration (HRSA), have published a new study in the journal Pediatrics: "Trends in the Prevalence of Developmental Disabilities in U.S. Children, 1997–2008." 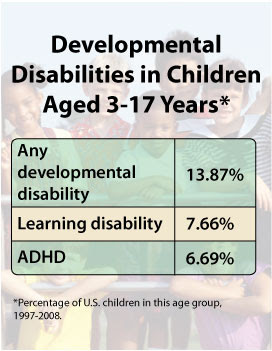 This study determined the prevalence of developmental disabilities in U.S. children and in selected populations for a 12-year period.

Main Findings from this Study

Data from the study showed that developmental disabilities (DDs) are common: about 1 in 6 children in the U.S. had a DD in 2006–2008. These data also showed that prevalence of parent-reported DDs has increased 17.1% from 1997 to 2008. This study underscores the increasing need for health, education and social services, and more specialized health services for people with DDs.

Over the last 12 years, the
In addition, data from this study showed
To better understand why the prevalence has increased, future research should focus on understanding the influence of increases in the prevalence of known risk factors, changes in acceptance and awareness of conditions, and benefits of early intervention services.

About Developmental Disabilities and this Study

Developmental disabilities begin anytime during development up to 22 years of age and usually last throughout a person's lifetime.

For this study, researchers aimed to determine the prevalence of DD in U.S. children overall and in certain populations from 1997–2008. Researchers analyzed responses from the 1997–2008 National Health Interview Surveys. A total of 119,367 children ages 3–17 were included in the study.

Parents or legal guardians were asked if their child had any of the following conditions: ADHD, autism, blindness, cerebral palsy, moderate to profound hearing loss, intellectual disability, learning disorders, seizures, stuttering/stammering, and other developmental delay.

CDC is part of a larger group of public and private organizations working to better understand developmental disabilities through surveillance, research, and early identification. CDC is undertaking efforts to:
Surveillance (Tracking): The Autism and Developmental Disabilities Monitoring (ADDM) Network is a group of programs funded by CDC to determine the number of people with autism spectrum disorders (ASDs) in the U.S.

Improving Early Identification of Developmental Delay and Disability: CDC's "Learn the Signs. Act Early." program aims to improve early identification of children with autism and other developmental disabilities so children and families can get the services and support they need as early as possible.

Developmental Disabilities - Learn the Signs. Act Early: Identifying developmental disabilities early allows children and their families to get the help they need. You can follow your child’s development by watching how he or she plays, learns, speaks, and acts. Talk with your child’s doctor at every visit about the milestones your child has reached and what to expect next. 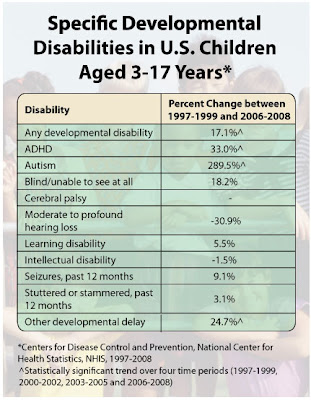