Many children and adults have difficulties reading and writing, and the reason is not always obvious. Those who suffer from dyslexia can exhibit a variety of symptoms.

Thanks to research by Dr. Begoña Díaz and her colleagues at the Max Planck Institute for Human Cognitive and Brain Sciences in Leipzig, Germany, a major step forward has been made in understanding the cause of dyslexia.

The scientists have discovered an important neural mechanism underlying dyslexia and shown that many difficulties associated with dyslexia can potentially be traced back to a malfunction of the medial geniculate body in the thalamus. The results provide an important basis for developing potential treatments.

People who suffer from dyslexia have difficulties with identifying speech sounds in spoken language. For example, while most children are able to recognise whether two words rhyme even before they go to school, dyslexic children often cannot do this until late primary school age. Those affected suffer from dyslexia their whole lives.

However, there are also always cases where people can compensate for their dyslexia. "This suggests that dyslexia can be treated. We are therefore trying to find the neural causes of this learning disability in order to create a basis for improved treatment options," says Díaz.

Between five and ten percent of the world's children suffer from dyslexia, yet very little is known about its causes. Even though those affected do not lack intelligence or schooling, they have difficulties in reading, understanding and explaining individual words or entire texts.

The researchers showed that dyslexic adults have a malfunction in a structure that transfers auditory information from the ear to the cortex is a major cause of the impairment: the medial geniculate body in the auditory thalamus does not process speech sounds correctly. "This malfunction at a low level of language processing could percolate through the entire system. This explains why the symptoms of dyslexia are so varied," says Díaz.

"This malfunction at a low level of language processing could percolate through the entire system. This explains why the symptoms of dyslexia are so varied."

Under the direction of Katharina von Kriegstein, the researchers conducted two experiments in which several volunteers had to perform various speech comprehension tasks. When affected individuals performed tasks that required the recognition of speech sounds, as compared to recognize the voices that pronounced the same speech, magnetic resonance tomography (MRT) recordings showed abnormal responses in the area around the medial geniculate body. 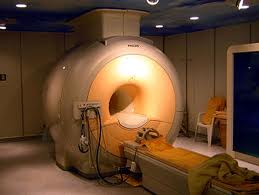 In contrast, no differences were apparent between controls and dyslexic participants if the tasks involved only listening to the speech sounds without having to perform a specific task. "The problem, therefore, has nothing to do with sensory processing itself, but with the processing involved in speech recognition," says Díaz.

No differences could be ascertained between the two test groups in other areas of the auditory signalling path.

The findings of the Leipzig scientists combine various theoretical approaches, which deal with the cause of dyslexia and, for the first time, bring together several of these theories to form an overall picture. "Recognising the cause of a problem is always the first step on the way to a successful treatment," says Díaz.

The researchers' next project is now to study whether current treatment programmes can influence the medial geniculate body in order to make learning to read easier for everyone in the long term.
at 9:35 AM