A growing body of research shows that children who suffer severe neglect and social isolation have cognitive and social impairments as adults. A study from Boston Children’s Hospital shows, for the first time, how these functional impairments arise: Social isolation during early life prevents the cells that make up the brain’s white matter from maturing and producing the right amount of myelin, the fatty “insulation” on nerve fibers that helps them transmit long-distance messages within the brain.

The study also identifies a molecular pathway that is involved in these abnormalities, showing it is disrupted by social isolation and suggesting it could potentially be targeted with drugs. Finally, the research indicates that the timing of social deprivation is an important factor in causing impairment. The findings are reported in the September 14th issue of the journal Science.

The researchers, led by Gabriel Corfas, Ph.D., and Manabu Makinodan, M.D., Ph.D., both of the F.M. Kirby Neurobiology Center at Boston Children’s Hospital, modeled social deprivation in mice by putting them in isolation for two weeks. Social isolation during early life prevents the cells that make up the brain's white matter from maturing and producing the right amount of myelin, the fatty "insulation" on nerve fibers that helps them transmit long-distance messages within the brain.

This image shows part of a neuron with an oligodendrocyte and myelin sheath: 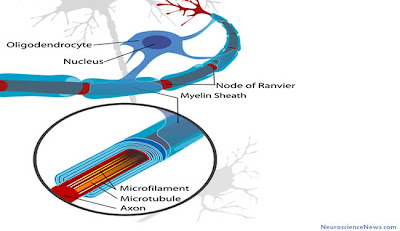 When isolation occurred during a “critical period,” starting three weeks after birth, cells called oligodendrocytes failed to mature in the prefrontal cortex, a brain region important for cognitive function and social behavior. As a result, nerve fibers had thinner coatings of myelin, which is produced by oligodendrocytes, and the mice showed impairments in social interaction and working memory.

Studies of children raised in institutions where neglect was rampant, including another recent study from Boston Children’s Hospital, have found changes in white matter in the prefrontal cortex, but the mechanism for the changes hasn’t been clear.

The new study adds to a growing body of evidence that so-called glial cells, including oligodendrocytes, do more than just support neurons, but rather participate actively in setting up the brain’s circuitry as they receive input from the environment.

“In general, the thinking has been that experience shapes the brain by influencing neurons,” explains Corfas, the study’s team leader and senior investigator, who also holds an appointment in the Departments of Neurology and Otolaryngology at Boston Children’s Hospital and Harvard Medical School.

“We are showing that glial cells are also influenced by experience, and that this is an essential step in establishing normal, mature neuronal circuits. Our findings provide a cellular and molecular context to understand the consequences of social isolation.”

Myelin is essential in boosting the speed and efficiency of communication between different areas of the brain, so the decreased myelination may explain the social and cognitive deficits in the mice. Corfas has previously shown that abnormal myelination alters dopaminergic signaling in the brain, which could provide an alternative explanation for the findings.

The new study also showed that effects of social isolation are timing-dependent. If mice were isolated during a specific period in their development, they failed to recover functioning even when they were put back in a social environment. Conversely, if mice were put in isolation after this so-called critical period, they remained normal.

Finally, Corfas and colleagues identified a molecular signaling pathway through which social isolation leads to abnormal myelination. The brains of socially isolated mice had less neuregulin-1 (NRG1), a protein essential to the development of the nervous system. Furthermore, when the team eliminated an NRG1 receptor known as ErbB3 from oligodendrocytes, the effect was the same as being in isolation—myelination and behavior were abnormal even when the mice were in a stimulating, social environment.

“These observations indicate that the mechanisms we found are necessary for the brain to ‘benefit’ from early social experience,” says Corfas.

The Corfas lab is now investigating drugs that might stimulate myelin growth by targeting NRG1, ErbB3 or related pathways. “Having both too much and too little myelination is bad,” Corfas cautions. “This is a pathway that requires very careful regulation.”

A number of neuropsychiatric disorders such as schizophrenia and mood disorders have been linked to pathologic changes in white matter and myelination, and to disturbances in the NRG1-ErbB signaling pathway, Corfas notes. Thus, the findings of this study may offer a new approach to these disorders.

The study was funded by NINDS, the National Institute of Neurologic Disorders and Stroke of the NIH.
at 8:06 AM