A new analysis of the cost of special education concludes that by cutting special education personnel levels in high-spending districts to the national average, the country could save up to $10 billion a year and improve educational outcomes for students with disabilities.

In "Boosting the Quality and Efficiency of Special Education," former Arlington, MA School Superintendent Nathan Levenson analyzed spending and staffing patterns in 43 percent of all school districts with at least 3,000 students, looking closely at how those districts spend money on students with disabilities.

Using the national average teacher's salary of $54,800, plus 32 percent of salary for benefits, he said districts could save $5.1 billion a year by reducing their special education teaching staff to the average.

Levenson made a similar conclusion about paraprofessionals, estimating a savings of about $2.3 billion a year.

Especially recently, special education spending has come under scrutiny by districts and states floundering because of the economic downturn. Federal laws prevent districts and states from cutting special education budgets without good reason, a provision of the Individuals with Disabilities Education Act called "maintenance of effort" that is intended to buffer services for students with disabilities from ups and downs in education budgets.

Some states have cut spending anyway, and some districts are cutting services and offerings for other students because of their special education obligations. Some districts have found creative solutions to cutting costs, including outsourcing services.

In addition, Levenson, a managing director at the for-profit District Management Council in Boston, used pairs of demographically similar districts in Florida, Massachusetts, Minnesota, Ohio, and Texas, to show that districts that spend less on special education often produce better academic outcomes for special needs students than their higher-spending counterparts.

Paired districts had socioeconomically similar student populations, a similar number of students, and roughly the same percentage of students with disabilities.

In nine of the 10 pairs, while one district spent between 11 percent and 57 percent more on special education, the other had 10 percent to 110 percent more students reach proficiency on state assessments. In only a single pair of districts in Florida, Levenson found, did more spending go hand in hand with a greater percentage of students with disabilities who were proficient on state tests.

"...we're mindful that the district pairs were chosen to illustrate the inverse relationship between special education inputs (spending) and outcomes (achievement)—so it's not surprising that they did, in fact, illustrate that relationship."

"We do not imply that these relationships are causal. And we're mindful that the district pairs were chosen to illustrate the inverse relationship between special education inputs (spending) and outcomes (achievement)—so it's not surprising that they did, in fact, illustrate that relationship," Levenson wrote in the report.

At the federal and state level, the report recommends that:
You can read about previous thoughts from Levenson on the special education spending issue here.

Part I: The Special Education Spending Debate Goes On


At a dinner party, you're not supposed to talk politics or religion. Although Miss Manners never forbade it, chatting about how to save money in special education may as well have been included in that list of taboo topics, too. After all, cost can't be a consideration when deciding what services a student with a disability needs.

While the rules about keeping views on religion and politics to oneself were abandoned long ago, the unofficial gag order on talking special ed funding held—until recently.

In a story earlier this year, I wrote about how one Massachusetts company is encouraging school districts to strive for more efficiency in special education. Look here to read more about that and some other recent discussions about special ed spending.

Now, others are chiming in. A report from the American Enterprise Institute reiterated some of the issues raised by others about how special education dollars are spent.

For example, districts need to keep better track of how teachers and staff who work with students with disabilities are assigned, said Nathan Levenson, managing director of the District Management Council, who wrote the AEI report Something Has Got to Change: Rethinking Special Education. They also need to rethink the use of aides and how much therapy—speech, physical, and occupational—students receive and evaluate whether those services affect student achievement.

When school districts don't take the relatively simple step of looking at how many aides are assigned to each school, how many hours each student spends in therapy, and how many students each special education teacher works with, they are missing an opportunity.

"As the business adage says, 'What gets measured gets managed'," Mr. Levenson writes, "and in special education, this lack of management has become increasingly costly."

He also suggested zeroing in on teaching students how to read, drawing on his experiences as superintendent in Arlington, Mass. The kind of remediation and intervention he suggests echoes the philosophy behind response to intervention.

Some of Mr. Levenson's other points drew criticism from the writers at IDEA Money Watch, including basic facts cited in the report about the number and types of students with disabilities in the country.

They also take issue with Mr. Levenson's statement that "the lackluster results for students with special needs are not from lack of effort; school districts are spending an increasing percentage of their total budget on special education."

Spending money isn't the same thing as effort. "By any large-scale measure, students with disabilities are performing poorly despite the enormous amount of funds that schools claim to be spending," IDEA Money Watch said.

Another point about spending, and whether spending more per student with a disability leads to the labeling more kids as needing special education services, is here.

As states and school districts continue to cut their budgets, it seems special education spending is now officially a part of the discussion.

From the Thomas B. Fordham Institute Education Blog "Flypaper - Ideas that Stick"

A few weeks ago, we at Fordham released a short analysis, Shifting Trends in Special Education. We noticed that some states, like Massachusetts and New York, identified almost twice as many students as needing special education as those in other states, like Texas and California.

We tried to make sense of these findings, but noted that we couldn’t find any statistically significant relationship between the demographics of a state and its special ed ID rate. In particular, the poverty rate of a state didn’t seem to matter; some poor states have high ID rates, other have low ones, and others are in between. Same with rich states.

Still, I couldn’t help but wonder if school spending (adjusted for cost of living) was driving the differences. After all, you don’t have to be a rocket scientist to notice that Massachusetts and New York spend a ton of money on their schools and California—similar to them in so many other ways—spends a fraction as much.*

So I asked our new research intern (and Koch Fellow) Josh Pierson to run a regression and here’s what he found: 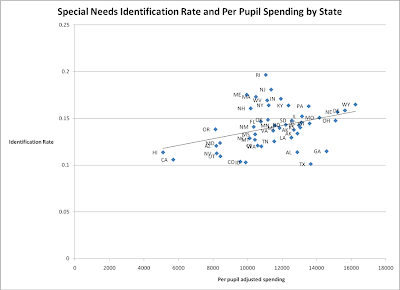 I then asked my friend Marty West, assistant professor at the Harvard Graduate School of Education, to interpret the findings. He wrote:

"The correlation between adjusted per pupil spending and ID rates is 0.37 (and highly statistically significant), which means that the relationship can account for 13 percent of the total variation in ID rates. If you look at it in a regression framework, you learn that a one thousand dollar increase in spending is associated with a 0.36 percentage point increase in ID rates. The relationship appears to be fairly linear and does not appear to be driven by outliers (i.e., one or two states with odd data).

Weighting states by enrollment (so that California contributes more to the estimation than Wyoming) makes the relationship stronger. Finally, controlling for your adjusted household-income variable strengthens the relationship (so that a one thousand dollar increase in ID rates gives you a 0.77 percentage point increase in ID rates). You also see that, controlling for spending, incomes are negatively related to ID rates."

He continues with a warning:

"There’s clearly a statistical relationship here, but it is hard to know what to make of it in terms of substance. It could be that better-resourced systems identify more kids because they have the capacity to serve them separately, but even if that were the case there is a lot of variation that it can’t explain (look at Rhode Island and Texas, for example). I think you need to be very careful in how you interpret these data.

"I can’t help but wonder whether the “New Normal” (most states finding resources much more limited) will drive down identification rates at a fast pace."

I agree; it’s hard to know what to make of these data. But it’s certainly possible that “better-resourced” systems are more willing to identify more students for special-education services. Whether that means that high-spending states are over-identifying kids—or that low-spending states are under-identifying them—is impossible to know, at least from these data. But at least we now have a plausible explanation for the big state-by-state variation. And I can’t help but wonder whether the “New Normal” (most states finding resources much more limited) will drive down identification rates at a fast pace."

*I was surprised to learn from the chart above that, after adjusting for cost of living, Massachusetts and New York don’t actually spend all that much money, and Texas is far from stingy. But look at California. Yikes.