From the Education Week Blog "Inside School Research" 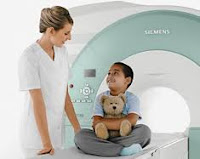 Could a brain scan one day be added to the normal developmental measures children receive at the pediatrician's office before starting school?

Jason D. Yeatman, a psychologist at the Stanford University Center for Cognitive and Neurobiological Imaging, hopes that researchers will soon be able to identify biological indicators for reading development just as they now do for height and weight.

Yeatman and fellow researchers from Stanford and Bar Ilan University in Ramat Gan, Israel, think they already have a clue to this. They found that in order to learn to read, a young child's brain must be developed enough to process the information, but still capable of fast growth, according to a new longitudinal study published today in the Proceedings of the National Academy of Sciences.

Researchers tracked development of reading skills and brain growth in 55 children ages 7-12 during a three-year period.

Two separate processes are hard at work in a child's developing brain during this time, Yeatman explained. Learning and practicing a skill creates and strengthens the neural pathways connecting the associated parts of the brain, represented by white matter; a child has three times as much white matter as an adult because they are making so many more new connections and learning new skills.

At the same time, however, unneeded connections are not reinforced and deteriorate over time, a process known as pruning.

"Both processes are unfolding over time. In good readers, they are balanced and going at the same time and being influenced by the child's experience," Yeatman said.

"What we think is happening in the poor reader is there was this exuberant growth in early life and then it had already plateaued ... by the time they were engaged in reading instruction. In the poor readers, the growth process has already stopped and you only see the pruning process."

High-performing readers initially had lower levels of white matter in the areas of the brain associated with visually identifying words, but these levels grew rapidly during the three years studied.

By contrast, below-average readers had higher initial levels of white matter in the areas associated with reading but these levels declined over time, suggesting the children were not creating and strengthening neural pathways.

"The brain matures in a sequential manner in which some circuits develop and stabilize while others remain capable of plastic change," the researchers noted in the study.

"In this view, reading instruction should be delivered when the systems needed to learn the material are adequately developed but still have a potential for further plasticity so that they can respond to the instruction."

It sounds like a big leap from this sort of brain imaging in a lab to a regular diagnostic tool, but Yeatman argues the magnetic resonance images that took an hour to capture five years ago now take only about five minutes, and measuring the density of neural connections requires only a snapshot of the brain, which is easier to perform on notoriously wriggly children.

As technology improves, he said he expects the cost of such scanning—now at about $400 for an hour—to drop.

"People are doubtful that 'neuroprognosis' will actually be useful. If you look at the cost to the system of children failing academically, those costs are incredibly high—thousands and thousands of dollars going to intervention programs, and, unfortunately, a lot of those intervention programs are not as effective as we'd hope," he said.

"I think we're getting close to the point of being able to identify a specific abnormality in an individual and make predictions and interventions based on that."

If we could find a way to make meaningful predictions earlier in life ... in a decade I'd like to be able to measure a 3-year-old, figure out what abnormalities are in there and what interventions might help prevent reading problems before they start."
at 12:16 PM