It can also help their social skills, decrease their symptoms of autism, and push their brain activity to work in a "normal" manner, according to a study published in the Journal of the American Academy of Child & Adolescent Psychiatry

This is the first study of its kind to reveal that early intervention of autism can help "normalize" happenings in the brain.

Sally Rogers, Ph.D., author of the study, professor of psychiatry and behavioral sciences and a researcher with the U.C. Davis MIND Institute, commented: "We know that infant brains are malleable, and had previously demonstrated that this therapy capitalizes on the potential of learning that an infant brain has in order to limit autism's deleterious effects."

The findings on improved behavioral outcomes, and the ability to normalize brain activity associated with social activities, signify that there is tremendous potential for the brains of children with autism to develop and grow more normally."

The researchers involved in the randomized, multi-centered, case-controlled trial discovered that kids who underwent the early interventions showed more brain activity when they saw faces, rather than objects, while the children who went through other interventions had the opposite response.

According to the U.S. Centers for Disease Control and Prevention, 1 in 88 children born every day will receive an autism spectrum disorder diagnosis. People with autism often have problems communicating socially, exhibit repetitive behaviors and do not relate well with others.

ESDM, which was started by Rogers and Geraldine Dawson, Ph.D., worked by combining developmental, play-based, relationship--based methods and training techniques of implemented examination of behavior.

"This may be the first demonstration that a behavioral intervention for autism is associated with changes in brain function, as well as positive changes in behavior. By studying changes in the neural response to faces, Dawson and her colleagues have identified a new target and a potential bio-marker that can guide treatment development."

Around 50% of the kids in the study were given the ESDM intervention for longer than 2 years - 20 hours per week. Parents of the children were taught how to provide the therapy, which the authors said is a major part of the intervention.

The other 50% of participants underwent community-based interventions and also received referrals, evaluations, resource manuals and different things to read.

Previous experimentation has determined that normal babies and children display more brain activity when when they look at social stimuli than non-social stimuli. On the other hand, children who have autism show the opposite.

Two times as many kids who went through the ESDM intervention displayed greater brain activation when they saw faces, not toys - which established that these children have normal brain activity.

Eleven out of fifteen (73%) of the participants who received ESDM were found to have more brain activation when they saw faces, rather than toys. Likewise, 12 of 17 (71%) normally developing kids exhibited the same responses. 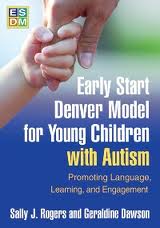 However, 64% of the children who received community-based interventions showed opposite "autistic pattern" reactions, such as brain activation when seeing toys more than faces. A mere 5% of these children showed normal brain activation.

Those who went through ESDM who displayed the highest amount of brain activity when they looked at faces also were found to have better social skills and were better at communicating with others, i.e. eye contacts, imitation, ect. ESDM results in improved cognitive function, life skills, and language.

Dawson, lead author of the study and professor of psychiatry, concluded:

"This is first case-controlled study of an intensive early intervention that demonstrates both improvement of social skills and normalized brain activity resulting from intervention therapy. Given that the American Academy of Pediatrics recommends that all 18- and 24-month-old children be screened for autism, it is vital that we have effective therapies available for young children as soon as they are diagnosed.

For the first time, parents and practitioners have evidence that early intervention can alter the course of brain and behavioral development in young children. It is crucial that all children with autism have access to early intervention which can promote the most positive long-term outcomes."
at 9:54 AM