Are Parents Setting Kids Up for Failure by Pushing Too Hard for Success?

From the Parenting Blog "Shine" by Yahoo!

No matter your socioeconomic status, as parents you want your kids to have better lives than you do. But instead of launching a generation of happy young adults who feel driven to succeed, parents who are hyper-focused on doing everything "right" have created a country full of kids who are stressed-out, burned-out, and depressed.

"According to psychologist and author Madeline Levine, "Our current version of success is a failure."

In her new book, Teach Your Children Well: Parenting for Authentic Success, Levine says that parents are preoccupied with "a narrow and shortsighted vision of success," and that we rely on our kids to "provide status and meaning in our own lives." It's a harmful combination, weighing kids down with serious issues -- "stress, exhaustion, depression, anxiety, poor coping skills, and unhealthy reliance on others for support and direction, and a weak sense of self," Levine says -- when we should be trying to teach them to be resilient and independent if we really want them to succeed in life.

When people are too caught up in finding the "right" way to parent, they can end up being physically present -- perhaps too much so -- but emotionally disengaged. "While you think you're giving your kids everything, they often think you are bored, pushy, and completely oblivious to their real needs," Levine writes.

A child's ability to succeed in life doesn't necessarily correlate to a parent's well-intentioned efforts anyway, says Bryan Caplan, a father of three and the author of Selfish Reasons to Have More Kids: Why Being a Great Parent is Less Work and More Fun Than You Think.

"Today's typical parents strive to mentally stimulate their children and struggle to protect their brains from being turned to mush by television and video games" pushing them instead to strive for academic success, he told Yahoo! Shine. "Yet by adulthood, the fruit of parents' labor is practically invisible. Children who grew up in enriched homes are no smarter than they would have been if they'd grown up in average homes."

But as parents push kids to succeed -- and try too hard to shield them from failure --their kids are soaking up the stress and increasingly unable to do anything without their parents' input.

"In the name of love, we parents have gutted our kids' sense of self-reliance and independence," David Arthur Code, author of Kids Pick Up On Everything," told Yahoo! Shine in an interview. "It's as if we run out in front of our children, removing every obstacle from their path, or else showering them with positive reinforcement if they stumble.

Sure, they feel safe and protected and loved -- for now -- but they never learn how to confront failures in childhood when the stakes are low, so when they become adults, they fold like a house of cards at the first adversity." 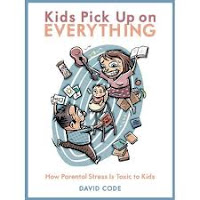 The result: A generation of kids and young adults who are afraid of failure, who engage in dangerous behavior in order to cope with stress they don't understand, or who don't know how to navigate life without their parents' guidance.

"The cost of this relentless drive to perform at unrealistically high levels is a generation of kids who resemble nothing so much as trauma victims," Levine writes. "They become preoccupied with events that have passed - obsessing endlessly on a possible wrong answer or a missed opportunity. They are anxious and depressed and often self-medicate with drugs or alcohol. Sleep is difficult and they walk around in a fog of exhaustion. Other kids simply fold their cards and refuse to play."

The solution? Levine suggests that parents step back and re-evaluate what's important to them, create a new definition of success, and then focus on fostering resilience in their kids.

"How would you ever know if you were capable or not if you didn't have to opportunity to try, fail, and pick yourself up again?" she asks.

Levine says that parents who want to raise kids who can really succeed in life should focus on teaching them these life skills:

"Don't project your own anxiety as your child moves forward," Levine writes. Doing so prevents kids from pushing past existing boundaries and trying new things, and robs them of their ability to solve problems on their own."

"Don't project your own anxiety as your child moves forward. We do not have to choose between children's well-being and their success. Both are inside jobs. They are developed when kids are guided and encouraged to build a sense of self internally."

"We do not have to choose between children's well-being and their success. Both are inside jobs. They are developed when kids are guided and encouraged to build a sense of self internally," Levine writes. "Ultimately, it is only our children themselves who pass judgment on their success, or lack thereof, in their lives."
at 3:31 PM