Is My Child's Behavior the Sign of a Learning Disability?

Any of this sound familiar?

Your child's teacher tells you that your son is having trouble sitting still in class…Every day, homework turns into a teary-eyed, hair-pulling, paper-tearing tug o' war…Your teen is caught painting graffiti on the bathroom wall…

You may be baffled by behaviors like these. And, you may wonder whether they could be linked to a learning disability (LD).

What follows is a brief overview of some behavioral red flags of learning disabilities. Remember: even when LD is linked to puzzling behaviors, it's likely other factors contribute as well.

Typical Behaviors in Kids with LD

Tobey Shaw, M.A., is principal of the Frostig School, a K–12 school in Pasadena, California, for children with learning disabilities and related problems. When kids first come to Frostig from other schools, Shaw and her colleagues typically see behaviors such as learned helplessness. "They've learned, I can't do this, so why try?" she says.

Impulsiveness, inattention, or distractibility is also common. How do these show up in the classroom or at home? In some cases, kids need to move around a lot. Or, they might shout out, instead of raising their hands.

Sometimes kids rush through projects or push books off tables, rather than saying they don't know how to do something. "We don't necessarily see these as behavioral 'problems' but rather as behaviors that are 'part and parcel' of the LD or ADHD," says Shaw.

Weaknesses in social skills also come with the territory, she says. Kids might have language-based LD, so they may not understand certain social cues or language pragmatics. "They misread things, or they can't gauge their audience. For example, they don't understand why the language they hear on MTV isn't appropriate for school."

All of this can make it more difficult for them to develop friendships and to become independent.

Falling behind in language-based areas — reading, writing, math, or verbal social skills — can also make a child feel less worthy. Since school is common to all kids, not making progress the way others do can inflict a big blow to self-esteem, also affecting behavior, says Thomas McIntyre, Ph.D., professor of special education at Hunter College of City University of New York.

"Our greatest human psychological need is to 'belong,' to have a soft place to fall," says McIntyre. But with LD, the hurdles are higher.

Steven E. Curtis, Ph.D., school and clinical psychologist with 25 years of experience working with children and parents, and former special education director at Seattle University, agrees that early signs of learning disabilities may show up as disruptiveness at first.

As children begin doing print-based work in kindergarten, for example, they may have trouble focusing or paying attention, doing what they can to avoid the task at hand. As first grade "ups the ante," kids may become aggressive or behave as though they don't want to grow up, he says.

Then somewhere around second grade, children with LD typically go down one of two paths, says Curtis. "They can turn into a really nice, charming child, woo the daylights out of you, and make you think they're on task," he says. "But they're really covering up and not doing anything. You'll ask them, 'How's school?' and they'll answer, 'Great!'"

This is more likely to happen, he says, in classrooms where teachers are not assessing children on a regular basis. These children are also more likely to slip through the cracks in classrooms where there is lots of parental involvement. Then tracking progress with individual kids may be more challenging. "Kids are good at covering up, so you have to be sophisticated at spotting it."

The other behavioral route children with LD may take is to become frustrated, check out, and get turned off to school. These two pathways – the charming cover-up or the aimless off-ramp – can continue throughout third and fourth grades, unless someone intervenes.

Behavioral signs of LD in a grade schooler may include:

As kids move into middle school, behavioral signs of LD might show up as more and more excuses for not doing the homework and more resistance to reading and writing, says McIntyre. "But that's human nature," he says. "We try to avoid things that are excruciatingly difficult, we try to avoid failing in school." A challenge might be good, but if it is beyond your child's current skill level, it can quickly become overwhelming.

If the teacher asks kids to do something publicly, they often feel they have a choice: They can be bad or they can be dumb." And bad trumps dumb as a public image thing," says McIntyre. "Sometimes kids are forced into the behavior we complain about. But they're just trying to protect their inner sense of self."

In addition to the signs that may show up in grade school, signs of LD in a middle schooler may include: 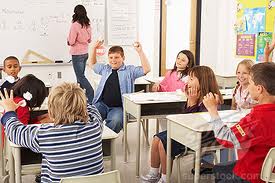 Sometimes behavioral signs of learning disabilities show up later – in high school or even college, says Curtis. How was this missed early on? Maybe a child has a less severe learning disability, making it harder to detect. Or, maybe you have a hard-working youngster who never wanted to ask for help.

As the academic demands mount, however, so can frustration, anxiety, or depression. And, watching peers pick up things more easily adds insult to injury for a child who finds it harder to meet the challenges.

A high schooler might engage in actions that reflect rejection of school or low self-esteem. A teen might reject school because he or she feels poorly served by it, says McIntyre. Or, poor self-esteem might surface due to a sense of failure and being unable to do what others grasp quickly.

In addition to signs that show up in middle school, behavioral signs of LD in a teen may include:

Of course, with adolescents come all the other physiological changes that accompany this stage of life, reminds Shaw. This may make it more difficult to sort out the source of the behavior at this stage.

If any of this sounds familiar, it's time to pursue a formal evaluation to get to the root of your child's behavior. Regardless of the cause, obtaining help may not only enhance your child's academic success, but also improve his or her relationships at school, at home, and in the world at large. And, that's something best not left to chance.

Annie Stuart is a freelance writer and editor with nearly 25 years of experience. She specializes in consumer health, parenting, and learning disabilities, among other areas. This article was made possible by a grant from the American Legion Child Welfare Foundation.
at 11:09 AM