The Hidden Potential of Autistic Kids

"...many think their potential extends beyond science to all professions, given the right chances."

When I was in fifth grade, my brother Alex started correcting my homework. This would not have been weird, except that he was in kindergarten—and autistic. His disorder, characterized by repetitive behaviors and difficulty with social interactions and communication, made it hard for him to listen to his teachers. He was often kicked out of class for not being able to sit for more than a few seconds at a time.

Even now, 15 years later, he can still barely scratch out his name. But he could look at my page of neatly written words or math problems and pick out which ones were wrong.

Many researchers are starting to rethink how much we really know about autistic people and their abilities. They are coming to the conclusion that we might be underestimating what they are capable of contributing to society. 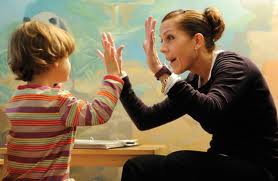 Autism is a spectrum disease with two very different ends. At one extreme are “high functioning” people who often hold jobs and keep friends and can get along well in the world. At the other, "low functioning" side are people who cannot operate on their own. Many of them are diagnosed with mental retardation and have to be kept under constant care.

Researchers have long considered the majority of those affected by autism to be mentally retarded. Although the numbers cited vary, they generally fall between 70 to 80 percent of the affected population.

But when Meredyth Edelson, a researcher at Willamette University, went looking for the source of those statistics, she was surprised that she could not find anything conclusive. Many of the conclusions were based on intelligence tests that tend to overestimate disability in autistic people. "Our knowledge is based on pretty bad data," she says.

This hidden potential was recently acknowledged by Laurent Mottron, a psychiatrist at the University of Montreal. In an article in the November 3, 2011 issue of Nature, he recounts his own experience working with high-functioning autistic people in his lab, which showed him the power of the autistic brain rather than its limitations.

Mottron concludes that perhaps autism is not really a disease at all—that it's perhaps a different way of looking at the world that should be celebrated rather than viewed as pathology.

Having grown up with two autistic brothers—Alex, four years younger than I, and Decker, who is eight years younger—Mottron's conclusion rings true. As I watched them move through the public schools, it became very clear that there was a big difference between what teachers expected of them and what they could do.

Of course, their autism hindered them in some ways—which often made school difficult— yet it also seemed to give them fresh and useful ways of seeing the world—which often don't show up in the standard intelligence tests.

That is because testing for intelligence in autistic people is hard. The average person can sit down and take a verbally administered, timed test without too many problems.

But for an autistic person with limited language capability, who might be easily distracted by sensory information, this task is very hard.

The most commonly administered intelligence test, the Wechsler Intelligence Scale for Children (WISC) almost seems designed to flunk an autistic person: it is a completely verbal, timed test that relies heavily on cultural and social knowledge. It asks questions like "What is the thing to do if you find an envelope in the street that is sealed, addressed and has a new stamp on it?" and "What is the thing to do when you cut your finger?"

This year Decker was kicked out of a test much like WISC. Every three years, as he moves through the public school system, his progress is re-evaluated as a part of his Individualized Education Plan—a set of guidelines designed to help people with disabilities reach their educational goal.

This year, as part of the test, the woman delivering the questions asked him, "You find out someone is getting married. What is an appropriate question to ask them?"

My brother's answer: "What kind of cake are you having?"

The proctor shook her head. No, she said, that's not a correct answer. Try again. He furrowed his brow in the way we have all learned to be wary of—it is the face that happens before he starts to shut down—and said, "I don't have another question. That's what I would ask." And that was that.

He would not provide her another question, and she would not move on without one. He failed that question and never finished the test.

A test does not have to be like this. Other measures, like Raven's Progressive Matrices or the Test of Nonverbal Intelligence (TONI), avoid these behavioral and language difficulties. They ask children to complete designs and patterns, with mostly nonverbal instructions. And yet they often are not used. 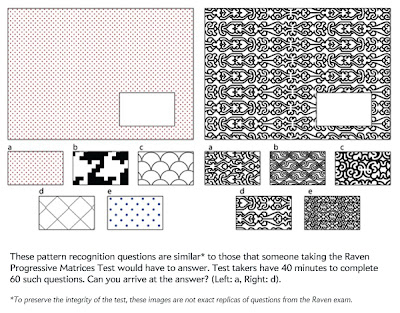 The average child will score around the same percentile for all these tests, both verbal and nonverbal. But an autistic child will not. Isabelle Soulieres, a researcher at Harvard University, gave a group of autistics both WISC and the Raven test to measure the difference between the two groups.

Although she expected a difference, she was surprised at just how big the gap was. On average, autistic students performed 30 percentile points better on the Raven test than on WISC. Some kids jumped 70 percentile points. "Depending on which test you use, you get a very different picture of the potential of the kids," she says. Other studies have confirmed this gap, although they found a smaller jump between tests.

The “high functioning” autistic children, with the least severe version of the disability, were not the only ones to score higher. Soulieres conducted a study recently at a school for autistic children considered intellectually disabled. Using the Raven test, she found that about half of them scored in the average range for the general population.

"Many of those who are considered low-functioning—if you give them other intelligence tests, you will find hidden potential," she says. "They can solve really complex problems if you give them material that they can optimally process."

What this means, she says, is that schools underestimate the abilities of autistic children all across the spectrum. The widespread use of the WISC in schools has helped set expectations of autistic kids too low—assuming that they will not be able to learn the same things that the average child can. Based on the test results, people come to the conclusion that autistic children cannot learn, when perhaps they do not learn the same way other people do.

The hidden potential of autistic people seems to fall in common areas—tasks that involve pattern recognition, logical reasoning and picking out irregularities in data or arguments. Soulieres describes working with an autistic woman in her lab who can pick out the slightest flaws in logic. "At first, we argue with her," Soulieres laughs, "but almost each time, she's right, and we're wrong."

Recognizing these talents, rather than pushing them aside to focus on the drawbacks of autism, could benefit not just autistic people, but everyone else as well. Mottron chronicles how much better his science got by working with his autistic lab partner. I got far higher marks on my homework than I would have without Alex, even though his corrections were sometimes infuriating.

And many think their potential extends beyond science to all professions, if given the right chances.

Just because a test says someone has potential, that does not mean it is easy to realize. My brother Decker’s teachers are convinced—and tests confirm—that he has hidden potential. But in class, he often falls behind when trying to listen to instructions and gets frustrated when trying to catch up.

More and more people are starting to wonder what gems might lie hidden in the autistic brain. And if my brothers are any indication, if we keep looking, we will find them.
at 9:38 AM