From The Atlantic's Urban Wonk Blog

Every day outside my son’s Brooklyn school, no matter what the weather, you will see a distinctive pale blue bicycle locked to the rack. It belongs to a 7th-grade girl from a Dutch family whose members have stuck with their traditional practice of riding to school each day, despite finding themselves in the not-so-bike-friendly United States for a few years.

This lovely blue city bike was a gift from the parents to their eldest child, who is now almost as tall as a grown woman. She has graduated from riding with her parents, and deserves a first-class vehicle to get to class each day. She is fiercely proud of it.

According to the results of a Danish study released late last year, my Dutch friends are giving their daughter a less tangible but more lasting gift along with that bicycle: the ability to concentrate better.

The survey looked at nearly 20,000 Danish kids between the ages of 5 and 19. It found that kids who cycled or walked to school, rather than traveling by car or public transportation, performed measurably better on tasks demanding concentration, such as solving puzzles, and that the effects lasted for up to four hours after they got to school.

The study was part of "Mass Experiment 2012," a Danish project that looked at the links between concentration, diet, and exercise. 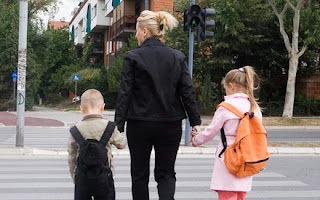 Niels Egelund of Aarhus University in Denmark, who conducted the research, told AFP that he was surprised that the effect of exercise was greater than that of diet:

"The results showed that having breakfast and lunch has an impact, but not very much compared to having exercised," Egelund told AFP.

"As a third-grade pupil, if you exercise and bike to school, your ability to concentrate increases to the equivalent of someone half a year further in their studies," he added.

The process of getting yourself from point A to point B has cognitive effects that researchers do not yet fully understand. I wrote last year about Bruce Appleyard’s examination of cognitive mapping, in which he compared children who were driven everywhere with those who were free to navigate their neighborhoods on their own.

His work revealed that the kids whose parents chauffeured them had a much poorer comprehension of the geography of the places they lived, and also a less fine-grained knowledge of the landscape around them.

In an article about the Danish study from the Davis Enterprise, Egelund says that he thinks there is a deep connection between the way we move our bodies and the way our minds work:

“I believe that deep down we were naturally and originally not designed to sit still,” Egelund said. “We learn through our head and by moving. Something happens within the body when we move, and this allows us to be better equipped afterwards to work on the cognitive side.”

Lots of parents drive their kids to school because walking or driving on streets and roads designed exclusively for cars makes the journey prohibitively dangerous for anyone, especially children. That problem is not easily solved, especially since schools are increasingly being built on the edges of sprawling development, rather than in a walkable context. [PDF]

But many other parents drive their kids because it’s easier, or seems to be easier. They often frame it as a kindness to the child to spare them “trudging” all the way to school, even if that trek is only half a mile long. As these short driving trips become the societal norm, it gets more and more difficult for families to deviate from them. School traffic begets school traffic.

So what could turn the trend around? The connection between active transportation and better physical fitness is well-documented and intuitively easy to draw, and yet apparently not compelling enough. As the Davis Enterprise article points out, even in a U.S. city with relatively good bicycle infrastructure such as Davis, California, parents continue to drive their children to school in huge numbers.

More than 60 percent of elementary students in that city arrive for class each morning with their parents behind the wheel. Nationally, as of 2009, only 13 percent of kids in the United States walked or biked to school, down from 50 percent in 1969.

But if more parents realized that packing the kids into the back seat actually affects their ability to learn, would they change their ways? Advocate for building schools in more walkable locations? Demand improved bicycle and pedestrian infrastructure? Or simply make the time and effort required to get to the kids to school under their own steam, accompanying them if need be?

Many parents pay for test prep and after-school enrichment programs to make their kids more academically competitive, and go to great lengths to schedule time for those activities. Imagine if they invested those resources instead in something as simple as helping their children to travel safely from home to school on foot or by bike, arriving ready to learn.
at 11:06 AM