Exercise may play a key role in helping children cope with stressful situations, according to a recent study accepted for publication in The Endocrine Society's Journal of Clinical Endocrinology and Metabolism (JCEM).

When they are exposed to everyday stressors, the study found sedentary children had surges of cortisol – a hormone linked to stress. The most active children had little or no increase in their cortisol levels in similar situations.

"The findings suggest physical activity plays a role in mental health by buffering children from the effects of daily stressors, such as public speaking," said the study's lead author, Silja Martikainen, M.A., of the University of Helsinki, Finland. 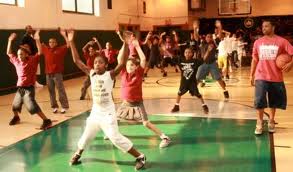 The study is the first to find a link between physical activity and stress hormone responses in children.

"Clearly, there is a link between mental and physical well-being, but the nature of the connection is not well understood," Martikainen said. "These results suggest exercise promotes mental health by regulating hormone response to stressors."
at 7:37 AM