Fixated by Screens, but Seemingly Nothing Else

From The New York Times - Health


The mother brought in a note from her son’s elementary school teacher: "Dear doctor, I think this child needs to be tested for attention deficit disorder."

“She’s worried about how he can’t sit still and do his work,” the mother said. “He’s always getting into trouble.”

But then she brightened. “But he can’t have attention deficit, I know that.” Why? Her son could sit for hours concentrating on video games, it turned out, so she was sure there was nothing wrong with his attention span. 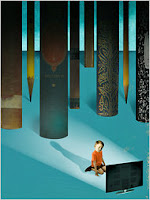 It’s an assertion I’ve heard many times when a child has attention problems. Sometimes parents make the same point about television: My child can sit and watch for hours — he can’t have ADHD.

In fact, a child’s ability to stay focused on a screen, though not anywhere else, is actually characteristic of attention deficit hyperactivity disorder.

There are complex behavioral and neurological connections linking screens and attention, and experts believe that these children do spend more time playing video games and watching television than their peers.

But is a child’s fascination with the screen a cause or an effect of attention problems — or both? It’s a complicated question that researchers are still struggling to tease out.

The kind of concentration that children bring to video games and television is not the kind they need to thrive in school or elsewhere in real life, according to Dr. Christopher Lucas, professor of child psychiatry at New York University School of Medicine. “It’s not sustained attention in the absence of rewards,” he said. “It’s sustained attention with frequent intermittent rewards.”

The child may be playing for points accumulated, or levels achieved, but the brain’s reward may be the release of the neurotransmitter dopamine. Children with ADHD may find video games even more gratifying than other children do because their dopamine reward circuitry may be deficient.

Indeed, at least one study has found that when children with ADHD were treated with methylphenidate (Ritalin), which increases dopamine activity in the brain, they played video games less. The authors suggested that video games might serve as a kind of self-medication for these children.

So increased screen time may be a consequence of ADHD, but some researchers fear it may be a cause, as well. Some studies have found that children who spend more time in front of the screen are more likely to develop attention problems later on.

In a 2010 study in the journal Pediatrics, viewing more television and playing more video games were associated with subsequent attention problems in both schoolchildren and college undergraduates.

The stimulation that video games provide “is really about the pacing, how fast the scene changes per minute,” said Dr. Dimitri Christakis , a pediatrician at the University of Washington School of Medicine who studies children and media. If a child’s brain gets habituated to that pace and to the extreme alertness needed to keep responding and winning, he said, the child ultimately may “find the realities of the world underwhelming, understimulating.”

But a 2007 study in the journal Media Psychology compared television watching in a group of children diagnosed with ADHD and a group without.

The researchers concluded that most differences were accounted for by family factors and environment, including whether the children had televisions in their bedrooms. ADHD by itself didn’t seem to make the difference. The connections between ADHD and screens, the authors concluded, were complex.

Elizabeth Lorch, a professor of psychology at the University of Kentucky and one of the authors of that study, also studied children’s ability to comprehend televised stories. While children with ADHD were able to recall facts from the stories they watched just as well as other children, there was a difference in their ability to understand the narrative and to separate out what was important.

“Why did an event happen, why did a character do this — that’s where the comprehension and recall of children with ADHD tends to fall down,” she said.

Her co-author Richard Milich, also a professor of psychology at the University of Kentucky, suggested that besides the primary implications of this problem for academic performance, this finding may also shed light on social difficulties.

“This inability to see causal relations may affect this social problem we’ve known for 30 years,” he said. “These kids have dramatic social problems. They’re highly rejected by their peers.”

It may be a self-perpetuating loop, experts say: Children who have trouble with social skills may be thrown back even more to the screen for electronic companionship.

Children whose brains need neurochemical rewards seek out an activity that provides it. Children with social problems spend more time alone, facing a screen. Children struggling in the classroom develop mastery in a virtual world. I talk to parents of children with ADHD about basic dos and don’ts:
If I can’t tell parents what they hope to hear, at least I can argue that these children’s fascination with the glowing screen may teach us something about their brains, the neurobiology, the rewards, and even their yearning and learning.
at 7:17 AM