From The Columbus Dispatch

In places where sunshine is plentiful, fewer children have attention-deficit hyperactivity disorder, according to new research.

This is the first report of a statistically significant correlation between sunshine — measured as “solar intensity” — and the disorder, said L. Eugene Arnold, an ADHD expert who worked on the study and a professor emeritus of psychiatry at Ohio State University. 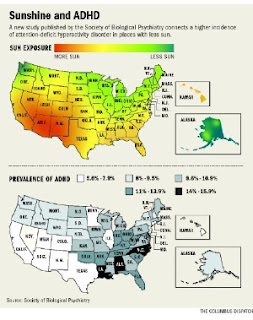 Researchers say the study is provocative and should prompt more digging into the topic. But it’s far from conclusive evidence that sunny climates keep rates lower in states including California and Colorado and in countries including Spain and Mexico.

Martijn Arns of Utrecht University in the Netherlands led the research project. The study was published yesterday in the journal Biological Psychiatry.

The researchers ruled out a number of other possible explanations for the geographic variability including low birth-weight, infant morality levels, socioeconomic differences and latitude. But they said other unknown factors could contribute to lower incidence in sunny spots.

Sunny states in the southeast, including Florida, don’t have low rates of ADHD. And often-less-than-sunny Illinois had an ADHD rate of 6.2 percent — identical to California’s — according to a 2007 federal survey. Ohio’s rate, according to that same survey, was more than 13%.

ADHD is an inability to control behavior, characterized by high levels of distraction, impulsiveness, an inability to remain still and a tendency to be abnormally talkative.

"As people spend more time in front of computers and hand-held devices in the hours leading up to bedtime, they’re getting less quality sleep. The blue light from the devices prevents the onset of melatonin, which naturally tells us to go to sleep.”

Arns speculated that our biological clocks could help explain the apparent connection with sun exposure.

As people around the world spend more time in front of computers and hand-held devices in the hours leading up to bedtime, they’re getting less quality sleep. “The blue light (from the devices) prevents the onset of melatonin, which naturally tells us to go to sleep,” Arnold said.

In theory, ample sunlight in some places could help make up for that, he said.

Arns wrote that vitamin D levels are an unlikely explanation for geographical variability, given another recent large study that showed no relationship between the vitamin and behavioral problems in children.

Previous research has found genetic predispositions that lead to ADHD, but scientists continue to look for other factors that contribute to symptoms in children and adults.

“Nobody has thought to look at this before. I think it’s a very important paper,” said Russell Barkley, an ADHD expert and clinical professor of psychiatry and pediatrics at the Medical University of South Carolina, who was not involved in the sunlight research.

Sleeping difficulties are known to interfere with attentiveness, so the rationale behind the study makes sense, Barkley said.

He said the findings could prove important for children and clinicians if more research in a controlled setting confirms a connection between light exposure and ADHD symptoms.
at 7:05 AM