Parents are using their mobile devices to help their children with an autism spectrum disorder (ASD) learn a variety of skills, organize their days, and to improve communication overall. Autism researchers are also beginning to explore ways to harness these common devices effectively to teach adaptive skills by using their video and photo features to support a variety of applications (or "apps"), and the specific apps designed for individuals with ASD.

They have found that handheld devices such as iPhones, iPads, and Androids can be viable tools for teaching language, motor, social, and play skills (1,2,3,4,5).

Researchers and educators report that children are more engaged in learning activities when they use these devices.

"I think it is the interactivity," says Kelly Meadows, an educational services coordinator for the Special Education Department at the Kennedy Krieger Institute in Baltimore. "They're more open to trying new things on these devices." 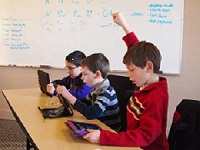 Meadows adds that this willingness to attempt new tasks on the iPad translates to real-life situations, in which children are showing better attitudes towards trying new things.

Last year, Dr. Howard Shane, a researcher at Boston Children's Hospital, published a study in the Journal of Autism and Developmental Disorders on using these devices to take advantage of the strong visual-processing skills of those with ASD (2).

"We want to tap into their interest and use it as teaching mechanism," he says. "We're trying to understand what are the skills that can be taught using these devices."

The capabilities of iPads, iPhones and Androids to capture photos and record videos, combined with their calendars, schedulers and reminders, make them useful for teaching cognitive and adaptive skills.

Dr. Teresa Cardon's research demonstrates that children with ASD prefer learning adaptive skills through video presentations rather than by following instructions from a person. Traditional media, however, made recording videos time-consuming and tedious.

"It used to take a lot to make the video, to upload it onto a computer, to edit it, to change the formatting-- whether it would be on a CD or DVD. It used to take a lot of work to edit," Dr. Cardon, an assistant professor of speech and language pathology at the Washington State University in Spokane, Washington, explains.

"With smartphones and iPads, it's simplistic. You can take a video or picture anywhere. You can be sitting at a restaurant. I can take a video of my husband ordering a meal so my child who has never ordered food on his own can see how it is done. You can use it in a live situation and it's much faster because of accessibility."

Dr. Cardon says children tend to pay more attention to video than to live instruction because they have difficulty with social interaction and can be distracted by people.

"Generalization [applying the skills to real situations] from video modeling tends to stick around longer and tends to happen more consistently," Dr. Cardon explains. "When they see the same model over and over again, it's easy to imitate because it is the same video that you can play back several times over, whereas if it's a live person, it is hard to be as consistent."

The ease of use experienced by caregivers with these portable devices and their multifunctional capabilities that cater to the preferences of children with ASD while also serving their learning needs makes them important teaching tools.

SGDs are portable devices used by individuals with severe speech disorders. They produce digitized speech and often provide the person using the device with a vocabulary represented by pictures or symbols. They can also incorporate multimedia content. Over time, they were modified to help improve comprehension and to serve as a picture-based organizational tool in addition to being used as a communication tool (2).

SGDs are bulky, and programming and personalizing them takes time. This is why they are facing competition from the relatively low-cost, easy-to-program mobile consumer devices such as tablets and smartphones (2).

For comparison, an SGD can cost anywhere between $7,000 and $10,000, while tablets start at only a few hundred dollars. Not to mention that these mobile devices are so commonplace that they eliminate the stigma attached to using a distinctive device such as an SGD.

Meadows explains that apps on iPads are also being customized to teach and reinforce specific classroom skills such as math, reading comprehension, and speech.

Some of the apps that Meadows endorses are:

Valerie Moscoso, whose son attends the Kennedy Krieger School in Baltimore, says one of the factors that have improved her 8th-grader's ability to listen to and process language is the iPad that he has been using at school.

"When you think of traditional teaching, it is very challenging," she explains. "Any way that their lessons can be presented in a more accessible way is more helpful for him. It's more engaging and he's made tremendous gains this past year."

Researchers and educators warn that despite their many advantages, these devices may not be suited to the needs of every child. For instance, if they are not interested in the digital or visual medium, or if they do not have sufficient motor skills to operate a device effectively, the device will not be as useful. Another possible limitation is that the devices provide too many distractions.

"They do have an iPad that they use to play, and they do not want to use it to learn," Meadows explains. "Not all kids know the distinction between using the iPad at home for play and using it in the classroom to learn, and when they are asked to do something they don't want to do, they go into crisis behavior."

Dr. Cardon says that in such situations, the apps and features used for entertainment can be used as positive reinforcement for study or learning.

"You have to know really how to promote Angry Birds [if the child likes the game] as positive reinforcement and say, 'If you do this for some time, then you can play Angry Birds'," she explains.

Dr. Shane stresses that the devices themselves do not enhance the skills of a child or adult with ASD. Rather, it is the thoughtful customization of their capabilities to the individual's needs that make them effective.