Researchers used data from 12,799 kids aged five to 19 who went to emergency departments across the country over nearly 20 years for brain injuries, and categorized them by players' ages, sports and how the injury was sustained — being struck by a player, an object such as net or ball, or playing surface. Player-to-player contact and hitting from behind were the main causes of brain injuries in hockey.

In Thursday's issue of the journal PLOS One, they said hockey accounted for 44 per cent of all injuries and almost 70 per cent of them occurred in children over age 10 from player-to-player contact or being hit into the boards.

"One surprising finding was despite having a rule in hockey for the last 20 odd years about hitting from behind, the hitting from behind is still a common mechanism," said Dr. Michael Cusimano of the neurosurgery division at St. Michael's Hospital in Toronto, where he treats people with brain injuries like concussion and studies prevention.

Overall, injuries tended to happen in the afternoon and evening, with more players heading to emergency during the fall and winter. 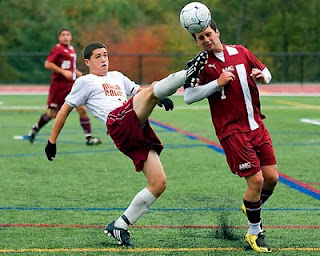 For 2010-2011, the Canadian Fitness and Lifestyle Research Institute said soccer was the most common sport played, at 38 per cent for those aged five to 17; followed by hockey or ringette at 23 per cent; swimming, 17 per cent; basketball, 15 per cent and baseball, 10 per cent.

For both hockey and soccer, the most popular sports, Cusimano suggested greater enforcement of rules against hits to the head and high kicks are needed, with incentives and disincentives for leagues, officials, players and parents to get the message and change behaviour.

"I do think that we encourage kids to play at such a level of intensity that I think they confuse intensity with aggression."

"I do think that we encourage kids to play at such a level of intensity that I think they confuse intensity with aggression," said Calce, who has two sons who play hockey. One had a concussion.

The research was funded by the Canadian Institutes of Health Research and the Ontario Neurotrauma Foundation.
at 9:53 AM