Sleep Apnea Linked to Behavioral and Learning Problems in Kids

Obstructive sleep apnea is associated with increased rates of ADHD-like behavioral problems in children, as well as learning problems, according to a new study.

Obstructive sleep apnea, a common form of sleep-disordered breathing (SDB), occurs in about 2 percent of children who are otherwise healthy, according to the American Academy of Sleep Medicine.

The new study shows that “there are considerable behavioral risks associated with continued SDB,” said Michelle Perfect, Ph.D., lead author and assistant professor at the University of Arizona. “[We] should also consider the possibility that SDB contributes to difficulties with hyperactivity, learning and behavioral and emotional dysregulation in the classroom.”

The five-year study, published in the journal SLEEP, used data from the Tucson Children’s Assessment of Sleep Apnea Study (TuCASA). That study examined Hispanic and Caucasian children between the ages of 6 and 11 to determine the prevalence of SDB, and its effects on neurobehavioral functioning. 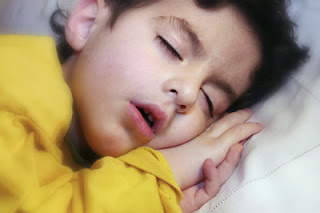 The new study involved 263 children who completed an overnight sleep study and a neurobehavioral battery of assessments, which included reports from both parents and the children.

Another 41 children who initially had sleep apnea no longer had breathing problems during sleep at the five-year follow-up, researchers report.

Parents of children with sleep apnea were more likely to report problems in the areas of hyperactivity, attention, disruptive behaviors, communication, social competency and self-care, the researchers report.

“Even though SDB appears to decline into adolescence, taking a wait-and-see approach is risky, and families and clinicians alike should identify potential treatments,” concluded Perfect.

According to the American Academy of Sleep Medicine, children with sleep apnea generally have larger tonsils and adenoids than other children. Effective treatment options include the surgical removal of the tonsils and adenoids or the use of continuous positive airway pressure therapy.
at 3:54 PM