The Uncounted Costs of Sensory Sensitivity

It's important not to underestimate sensory sensitivity. 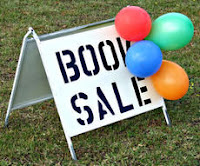 One day a few weeks ago, I went to my local library to do a little research when I saw a sign for a book sale at a different branch. “That should be fun!” I thought, figuring it could be a fun way to spend a little time on a Saturday afternoon.

So, I finished my research, and took a drive over to the sale.


Seeing the sign, I’d pictured a few books stacked on tables in a little corner of the quiet library…easy to quickly and quietly browse. What I found was something else entirely. Apparently, the sale was being held in the basement of the building, and a crowd had gathered at the top of the stairs, sandwiched within the very small atrium of the building. A place with very bad acoustics.

The sound of their myriad overlapping conversations was so loud, that my first thought was to immediately turn around and leave. But my pride wouldn’t let me go. I’d invested the time to drive all this way. I hated to think I’d done it for nothing. Surely I could take just a few moments to stop and look. So, I took a deep breath, and took my place in line.

Shortly after I arrived, a spokesperson came out and yelled, “The sale will be open in 15 minutes.” That was a little longer than I had thought. I wondered if I could make it.

The roar of the crowd assaulted me from every direction, then bounced off the walls in order to assault me again.

Whenever I thought I’d accommodated to the uncomfortably loud, but steady, strong morass of sound, someone’s voice would leap out of the crowd louder than the rest, as if they’d suddenly appeared immediately next to my ear, or someone had cranked the volume on a stereo to maximum without warning. A few moments of that, and I began to feel like I’d been whipped, repeatedly.

I pulled out my phone and immersed myself in it, trying to close into myself and to tune it all out. To retreat into my own private world where this mass of people and their talk of churches and kids and PTAs didn’t exist. If I could just make it a few more minutes, I thought, I’d be inside and everything would be OK.

When they opened the doors, I let out a sigh of relief. But, as the crowd poured into the basement room I realized that this room would provide different challenges. It was chock full of shelves, stuffed with books. 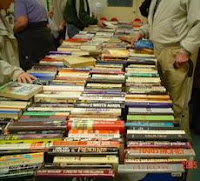 There were so many books that the shelves were sandwiched together so that only one person could navigate an aisle at a time. And those aisles were filling up quickly.

Kids ran past me on both sides, squealing loudly with excitement over the racks of used DVDs at the front of the room. Practically pushed forward by the surging crowd, I tried to take a moment to take stock of the room and plan my strategy. I spied the psychology section first, and headed in that direction. But I was quickly hemmed in.

The aisle was packed, and stopped by the other browsers I was able to browse only a small section of shelf at a time. I got frustrated at this, and turned to leave, only to have someone else enter the aisle behind me, blocking me in. I was beginning to feel claustrophobic now, and trapped.

I longed to shove my way out of the crowd, but politeness dictated that all I could do was stand and wait until the browsers in front of me finished. I grabbed a couple of books that vaguely interested me…then tried for an escape. That was not easy. Every which way I turned I was blocked by someone.

Eventually, I made my way to the periphery of the room, where the aisles were slightly wider. But still, they weren’t exactly spacious. Those that made their way past the browsers in these aisles squeezed by in an awkward sideways crab-walk, their winter coats going “squeesh, squeesh, squeesh” against the shelves as they did so.

Desperate to get out, still I hesitated, afraid that I might not be able to carry out this crab-walk without bumping into someone and offending them. I still haven’t completely mastered the social routine of saying “excuse me”. But finally, I decided to risk it. I had to get out of there.

Finally in the home stretch, I quickly paid for my purchases and left. Rattled, I sat in my car taking deep breaths, and spend a few moments quietly contemplating my phone to try to settle my nerves. When I felt sufficiently calm, I drove home, where curled up on the couch, a soft, furry blanket gliding soothingly across my skin.

Sitting alone in the quiet house, it seemed that everything was OK – until a few hours later when I found myself getting frustrated at my computer. On edge, I suddenly felt a billowing rage overcome me. I wanted to scream and throw the computer against the wall. All this negative energy was boiling over, with no place at all to go – and simply no reason for it that I could see.

I gave myself a mental time out, took a deep breath, and asked myself what was wrong. That’s when I made the connection. Of course…the library. I was chagrined to realize that even after decades of living with this body, I still hadn’t realized the full cost to myself of such situations, and how long after the consequences can linger, and the many ways that they can disguise themselves.

For my own sake, I should have been more vigilant, but this is what comes of spending most of my life suppressing my differences instead of trying to understand them. Sensory overload is an assault, and is experienced as such.

Recovering from an assault takes more than just removing yourself from the situation. It has emotional after-effects, too. Ones that effect not only you, but those around you.

I wish I had understood that a long time ago. It would have changed so much.

Lynne Soraya is the nom de plume for a writer with Asperger's Syndrome. Her forthcoming book, Living Independently on the Autism Spectrum: What You Need to Know to Move into a Place of Your Own, Succeed at Work, Start a Relationship, Stay Safe, and Enjoy Life as an Adult on the Autism Spectrum, can be pre-ordered now at Amazon. You can follow her on Facebook and Twitter.
at 10:38 PM