A Better Way to Treat Anxiety

From The Wall Street Journal Blog "The Informed Patient"

For Teens, Therapy Turns Parents Into 'Exposure Coaches,' Not Protectors.

Getting up the nerve to order in a coffee shop used to be difficult for 16-year-old Georgiann Steely. Speaking in front of classmates was unthinkable.


The high-school sophomore overcame a crippling case of social anxiety as a patient in the Child and Adolescent Anxiety Disorders program at the Mayo Clinic in Rochester, Minn. Therapists there use an innovative approach early in treatment, gradually exposing children to things they fear most and teaching parents to act as "exposure coaches" rather than enable their children to avoid things and situations as a protective measure.

"Kids who avoid fearful situations don't have the opportunity to face their fears and don't learn that their fears are manageable," he says.

Anxiety disorders, comprising a dozen diagnoses including phobias and obsessive-compulsive disorder, are among the most common mental health issue in youth yet they often go undetected or untreated, experts say. They can prevent a child or teen from developing skills necessary for success later in life.


According to a report released by the Centers for Disease Control and Prevention last week, about 1.8 million children under 18 currently have anxiety disorders. Some studies suggest as many as 10% of children suffer from phobias.

There are many external reasons for a child to experience anxiety, such as bullying at school or problems at home, and it is important to assess if such factors are to blame rather than "just stressing personal coping strategies," says Howard Adelman, a psychologist and co-director of the Center for Mental Health in Schools at the University of California, Los Angeles.

But unlike the normal fears of childhood, or the shyness and insecurities of teen angst, anxiety disorders are extreme and don't subside with time. They can significantly impair a child's ability to function, according to Thomas Ollendick, director of the Child Study Center at Virginia Polytechnic Institute and State University.


Children and teens with anxiety disorders don't recognize their fears as unreasonable and may have physical symptoms like stomachache and headache. They may suffer from chronic, excessive worry about school, social interactions, health and safety, and world events.

Some children with anxiety also suffer from depression, and medications may be prescribed to help with both. Mental-health professionals have also relied on cognitive behavioral therapy, which focuses on anxiety-management and relaxation skills to help children control their own physical responses to anxiety. Other customary treatments include "cognitive restructuring," which includes positive thinking, weighing evidence for and against their fears and creating a coping plan for feared situations. Typically, when exposure therapy has been used, it is usually introduced later in treatment.

But researchers at Mayo, Virginia Tech and other institutions are finding that slowly exposing children to the things they are anxious about, at an early point in treatment, can be highly effective in helping them overcome anxiety. Sometimes, it doesn't require a long course of therapy.

Dr. Ollendick developed an intensive three-hour session to help children overcome phobias such as riding in elevators or encountering a dog. His intensive approach has been shown to be more effective than treatments that emphasize education about phobias but not exposure to a feared object or situation. Therapists work with parents to reinforce and maintain what the child has learned and to schedule follow-up calls.

A study led by Dr. Whiteside and published in March in the journal Behavior Therapy showed that when children were slowly exposed to situations that caused fear, their parents' avoidance scores on questionnaires declined by half. Dr. Whiteside also developed a mobile app, the Anxiety Coach, which helps patients learn about anxiety, manage symptoms and make lists of activities to help them face their fears.

The gradual-exposure principles are part of the program that helped Georgiann Steely at Mayo's teen clinic. Georgiann has struggled with depression since the eighth grade and she was treated with medication. But she also seemed painfully shy, avoiding parties and gatherings of friends. Her mother, Amy, says she worried that her daughter "wasn't participating in her own life."

The Steely family was part of a random sample of Rochester residents invited to participate in research Dr. Whiteside was conducting to develop anxiety questionnaires. Mrs. Steely says even after filling out survey questions about how she reacted when her daughter tried to avoid situations, "I didn't make the connection that our stepping in and making accommodations for Georgiann could increase anxiety."

"I knew I was an overprotective Mom, but I had my reasons," she adds. She and she husband, Stan, who works as a nurse in an infusion clinic at Mayo, "thought we were helping by keeping her stress level down." 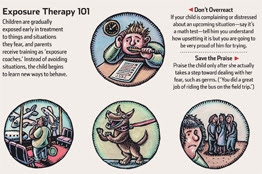 When Georgiann's depression took a turn for the worse a year ago, the family doctor steered them to Mayo's teen clinic. As part of her initial evaluation "they picked up on her anxiety right away," Mrs. Steely says.

Therapist Michael Tiede worked with Georgiann in group sessions and one on one to help her gradually do things she was afraid of and, as she says, "put myself out there." Mr. Tiede and Georgiann say she shared her goals with the group each week, whether it was agreeing to meet friends at the mall, joining in a conversation or even just wearing her hair differently one day to see that it wouldn't attract undue attention.

Recently, a friend asked Georgiann to participate in a school program to help students become more compassionate and stop bullying. She agreed to speak about her struggle with depression at a school assembly along with others sharing tough experiences. Another milestone: she played her violin in an ensemble performance with musicians she didn't know.

Georgiann says she is thinking about becoming a counselor herself someday. Mrs. Steele says the family learned to "provide support while she steps out and challenges herself."

"Every day I am astounded at how far she has come," she adds. "It's like having a different kid."