No One Is Abandoning the DSM, but It Is Almost Time to Transform It

From the Scientific American Blog "Brainwaves"

“...the DSM diagnoses are based on a consensus about clusters of clinical symptoms, not any objective laboratory measure.”

This month the American Psychiatric Association will publish the latest edition of its standard guidebook for clinicians, the Diagnostic and Statistical Manual of Mental Disorders 5 (DSM-5).

In somewhat the same way that a field guide to birds helps people distinguish different species with illustrations and descriptions of physical features—a beak’s hooked tip, a blush of red plumage—the DSM helps clinicians recognize different mental illnesses with lists of typical symptoms, such as insomnia, low mood and hallucinations. 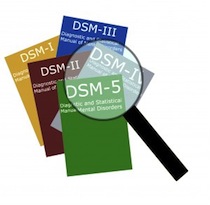 The difference is that, whereas generations of biologists confirmed the existence of the animals they study—by taking their pictures, holding them in their hands, comparing their DNA letter by letter—no one knows if the disorders in the DSM are real.

Let me be clear: mental illness is real, but the discrete categories of illness in the DSM might not exist outside its pages. Are some people tired and miserable most of the time, plagued by spiraling thoughts of hopelessness and helplessness, unable to sleep—or sleeping too much—and uninterested in almost everything that once gave them pleasure, including sex? Absolutely. Their illness is real.

Do all such people have a single disease that the DSM names depression? Probably not.

Depression as defined by the DSM is a way of thinking about such symptoms. The DSM is not a catalogue of well-understood diseases with known causes that clinicians can identify with reliable diagnostic tests. It’s a book of useful concepts about some of our most complex and perplexing illnesses. It’s what we have to work with.

The American Psychiatric Association (APA) knows this. So does every major mental health organization, including the National Institute of Mental Health (NIMH). Recently, New Scientist, MIT Technology Review, Mind Hacks, The Verge and others—including my colleague John Horgan—proclaimed that the NIMH has suddenly decided to abandon, ditch or otherwise reject the DSM.

This is a misunderstanding. Saying that the NIMH is rejecting the DSM is nonsensical. The fact is that psychiatrists need a common language in which to talk about their patients and the DSM—along with the similarly categorical International Classification of Diseases (ICD)—is the best guidebook available.

In many cases, insurance companies require official DSM diagnoses before they help cover the costs of therapy and medication; the courts consider DSM definitions when discussing someone’s mental state; and the government still depends on the DSM when deliberating eligibility for disability benefits.

None of that has changed.

NIMH has, however, been working on an endeavor known as the Research Domain Criteria Project, or RDoC for short, which encourages psychologists, neuroscientists and other scientists to think outside the DSM box—to begin transitioning away from established DSM disorders and instead study fundamental biological and cognitive processes underlying mental illness.

The important distinction here is between clinical practice and research. The NIMH is not in any way saying that clinicians should stop using the DSM, but it does think that the DSM has constrained research. For a long time, scientists studying mental illness have found it much easier to get grants if they investigate an official DSM disorder and recruit participants who meet all the criteria for that disorder, rather than studying symptoms or unusual behavior not already sanctioned by the DSM.

NIMH wants to change that by funding studies that are not strictly bound by the DSM‘s definitions.

Given that DSM disorders are useful inventions that do not perfectly mirror the reality of mental illness—or, in some cases, do not reflect its reality at all—the idea is to use modern tools to identify specific changes in the brain’s structure and behavior that at least partially explain the various symptoms of different mental illnesses.

As I wrote in the May issue of Scientific American, “Some scientists might explore how and why the neural circuits that detect threats and store fearful memories sometimes behave in unusual ways after traumatic events—the kinds of changes that are partially responsible for post-traumatic stress disorder. Others may investigate the neurobiology of hallucinations, disruptions in circadian rhythms, or precisely how drug addiction rewires the brain.”

RDoC is not a brand new development—it began in 2009—and it will continue for at least another decade. In the long-term, RDoC will hopefully improve not only diagnosis of mental illness, but also its treatment, by providing new specific biological targets for medication.

As far as I can tell, the recent confusion in the media began as a misinterpretation of Thomas Insel‘s April 29th blog on the NIMH website. Insel, Director of NIMH, and his colleague Bruce Cuthbert, Director of the Division of Adult Translational Research, are leading RDoC.

Nowhere in his blog does Insel say he is abandoning the DSM, but he does make it clear that “the DSM diagnoses are based on a consensus about clusters of clinical symptoms, not any objective laboratory measure,” that “patients with mental disorders deserve better” than the DSM and that “NIMH will be re-orienting its research away from DSM categories.”

None of this is particularly shocking to professional psychiatrists or anyone even moderately acquainted with psychiatry. I think the leaders of the APA would agree with just about everything Insel wrote. In fact, the NIMH and APA plan to collaborate to transform psychiatric diagnosis. RDoC is meant to help rewrite the DSM, not abolish it.

I got in touch with both Insel and Cuthbert to further clarify the matter. “The sensationalist headlines out there are entirely misleading, and we will continue to support DSM-based research as we increase our portfolio of RDoC grants,” Cuthbert wrote in an e-mail.

“RDoC is intended to inform future versions of the ICD and DSM; we have no intention of coming out with a competing system. The implication of this is that the fruits of RDoC are likely to be taken up into the ICD/DSM piecemeal rather than in one entire set, at such times as the evidence for various aspects becomes strong enough to warrant changes to the nosologies.”

Insel echoed these comments in a separate e-mail:

“We cannot ‘ditch’ or ‘reject’ terms like schizophrenia or bipolar. We just need to view them as constructs, perhaps including many different disorders that require different treatments or obscuring disorders than cut across the current categories. A symptom-only system will not be sufficient for identifying brain disorders—whether the initial label is dementia or schizophrenia.”

When censure comes easily, it is dangerously seductive. People get something akin to schadenfruede out of condemning the DSM and all of modern psychiatry along with it. Super important government institution rejects psychiatry’s beloved Bible! Psychiatrists in crisis. Everything will change. It’s so easy to tweet and retweet hyperbolic claims—or post a link on Facebook—before really understanding the issues.Something big is happening. I must be a part of it. But such sensationalism obscures the truth. The DSM is severely flawed, but it has improved over time; so has psychiatry.

“Schizophrenia remains an immensely useful construct–imperfect for sure, but very helpful in clinical communication and in guiding treatment,” writes Allen Frances, a professor emeritus at Duke University, North Carolina, the chairman of the DSM-IV task force and one of the DSM-5‘s most vociferous critics. “The DSM disorders are all fallible and subjective constructs, but most are useful as temporary way stations until we learn more and can develop better ones.”

In so many of the recent critical articles about the DSM-5, the ironic implication is that abandoning the DSM is the right thing to do—that it’s a drastic but necessary move in order to help people with mental illness. Really? Abruptly abandoning the DSM would not help anyone. Fortunately that’s not what is happening.

About the Author: Ferris Jabr is an associate editor focusing on neuroscience and psychology. Follow on Twitter @ferrisjabr.
at 7:02 AM