Most teachers think that students today have a problem paying attention. They seem impatient, easily bored.

I’ve argued that I think it’s unlikely that they are incapable of paying attention, but rather that they are quick to deem things not worth the effort.

We might wonder if patience would not come easier to a student who had had the experience of sustaining attention in the face of boredom, and then later finding that patience was rewarded.

Arguably, digital immigrants were more likely to have learned this lesson. There were fewer sources of distraction and entertainment, and so we were a bit more likely to hang in there with something a little dull.

I remember on several occasions when I was perhaps ten, being sick at home, watching movies on television that seemed too serious for me—but I watched them because there were only three other TV channels. And I often discovered that these movies (which I would have rejected in favor of game shows) were actually quite interesting.

Students today have so many options that being mildly bored can be successfully avoided most of the time.

If this analysis has any truth to it, how can digital natives learn that patience sometimes brings a reward?

Jennifer Roberts, a professor of the History of Art and Architecture at Harvard, has a suggestion.

She gave a fantastic talk on the subject at a conference hosted by the Harvard Initiative on Learning and Teaching (more here).

Roberts asks her students to select a painting from a Boston museum, on which they are to write an in-depth research paper.

Then the student must go the museum and study the painting. For three hours.

The duration, “meant to seem excessive” in Roberts’ words, is, of course, part of the point. The goal is that the student think “Okay, I’ve seen about all I’m going to see in this painting.” But because they must continue looking, they see more. And more. And more. Patience is rewarded. 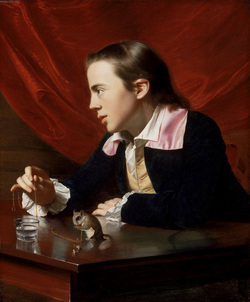 Roberts gave an example from her own experience.

As part of a book she was writing on 18th century American painter John Singleton Copley, she studied at length the painting A Boy With a Flying Squirrel.

Although she is, obviously, an extremely experienced observer of art, Roberts noted that it was many minutes before she noticed that the shape of the white ruff on the squirrel matches the shape of the boy’s ear, and is echoed again in the fold of the curtain over his left shoulder.

If we are concerned that students today are too quick to allow their attention to be yanked to the brightest object (or to willfully redirect it once their very low threshold of boredom is surpassed), we need to consider ways that we can bring home to them the potential reward of sustained attention.

They need to feel the pleasure of discovering that something you thought you had figured out actually has layers that you had not appreciated.

That may not be the 21st century skill of greatest importance, but it may be the one in shortest supply.
at 7:04 AM