The Other Side of the Spectrum

“I’m sure you want to know if he’s on the autism spectrum,” the doctor said. I was dumbstruck. I nodded. An autism spectrum disorder (ASD) was nowhere on my radar but I didn’t let on my surprise.

Instead, I sat through the rest of my son’s doctor’s appointment in a complete fog. How could I be so blindsided? I prided myself for being well informed, investigating all the possible reasons why our sweet, little boy never uttered a mama or dada by the age of 2; why he always fell short of meeting his milestones – turning over, crawling, walking, talking. I always tried to reassure myself that he was on his own developmental track and he would just grow out of it.

He’d been given numerous diagnoses, none of which explained our child and varied depending on the specialist — verbal apraxia, sensory integration dysfunction, ADHD, even oppositional defiant disorder (ODD).

We became concerned when he started waving objects in front of his face, shaking his head side to side in a rhythmic way as he examined each piece, then lining them up in perfectly straight rows. I remember one morning I woke up late and found him in our kitchen, the lazy Susan cupboard ajar and all my 200 + spice jars lined up like little toy soldiers in a display covering every square inch of countertop space. He looked up at me with his big, beaming smile, so proud of his accomplishment. It was painstaking work and he must have been at it for quite some time while I was in deep slumber.

Isolated experiences like this didn’t worry me, but coupled with increasing anxiety and obsessive-compulsive tendencies, I knew something was not right. I didn’t understand why he had such a hard time at birthday parties, special outings to the zoo, a museum or a children’s show. Oftentimes, a loud noise or sudden applause would reduce him to a puddle of tears and he’d point frantically toward the exit for relief.

My admiration for his strict adherence to his bedtime routine turned into worry when he would get upset at the slightest departure from our standard operating procedure.

Still, his doctor didn’t want to be hasty with a diagnosis, deciding to observe his progress for another six months. I was grateful for that because it gave me time to digest the news and research ASD on my own. I began in earnest to understand what exactly this meant. Part of my incredulity was due to my own misunderstanding of the autism spectrum.

Images of children on the spectrum in popular culture are very one-dimensional: a non-verbal child with poor eye contact who shuns physical contact and affection; a “little man/woman” who prefers to play by himself/herself than with others, always serious and sedate – a loner. This is what I understood an autism spectrum disorder to be.

Our son, on the other hand, is nothing like this. He is lovable, bright, warm and full of an endless supply of kisses and hugs for his family and friends. He looks at you with his big, brown eyes and will even turn YOUR head towards HIM if you don’t return his gaze. He has a wicked sense of humor and an infectious giggle. He is always on the look out for someone to play with. Neighbors joke that our son’s official post is at the front door, face squished against the glass peering out, waiting for a friend or neighbor to make an appearance. My storm door, perpetually covered in face smudges and dirty handprints, is visible proof.

So how could this be the face of autism? It didn’t make sense to me or frankly to many teachers, friends and family who all doubted the possibility of a spectrum disorder. But then in my research, the full breadth of the spectrum began to reveal itself. I plowed through website after website, printed out stacks of journal articles. I replaced Dr. Sears and What to Expect books on my shelves with books by Stanley Greenspan, Tony Attwood and Carol Gray.

As a stay-at-home mom, I made it my job to learn all I could to best help our son. I reached out to parents online. I attended lectures once or twice a week trying to understand the latest research on autism or the best ways to manage a child with a social communication disorder.

I felt like a student again with so much to learn, but this time I was on a mission. On days I felt too exhausted, I would tell myself that I had no other choice. I had to keep going. My son’s future and happiness depended on it.

It wasn’t until I began meeting with other parents that I began to see the other side of the spectrum. I found myself in support groups empathizing with parents going through similar challenges. I met some of them for coffee and we shared our experiences. I took great comfort talking to other moms who truly understood what I was going through. And yet as much as we shared in common, the individualism of each child on the spectrum shines through in their stories.

No two children on the spectrum are exactly alike; even among those who are high functioning, their strengths and challenges are unique and varied.

After months of research, I grew accustomed to the possible ASD diagnoses: High Functioning Autism (HFA), Asperger' Syndrome, Pervasive Developmental Disorder Not Otherwise Specified (PDD-NOS). I took the doctor’s lead who seemed not to care exactly which term we used but saw the importance of conceptualizing him as a child on the spectrum so we could best meet his needs.

Final confirmation took time – practically a year of observation by his doctors and a comprehensive evaluation by a multidisciplinary team of autism diagnosticians. And even then, we got second and third opinions all confirming a diagnosis of HFA. Oddly enough, with this firm diagnosis came a sense of relief. In my heart I’d accepted months earlier that my son had an autism disorder. Now that we had a diagnosis, we could move on to focusing on proper interventions and strategies.

Getting to a diagnosis was really secondary to getting our son the help he needed. Don’t get me wrong; it helped in very practical and immediate ways to access services through insurance and the county. But according to all my research on developmental delays, it is indisputable that, diagnosis or not, early intervention is key. The county provided ongoing help through early intervention services and special education. But still, in my gut I knew that they were not addressing some major areas of concern.

This is when I realized how vital my role as a parent advocate was to my son’s well being. It took a lot of inner strength and belief in my instincts as a parent to go beyond the school system to look for help. I knew that something was not right even when his teachers dismissed my concerns. It is so important to believe that you are the true expert on your child.

In our case, our son was exhibiting persistent behaviors at home that were either not exhibited in the classroom or not recognized as significant. That is why it is crucial for the parent and the educator to work in tandem to identify and give the child the proper supports to learn and grow. I love the analogy that another Growing Together guest blogger, Amy Bereton, PhD., makes of this relationship and I think it bears repeating. She compares the roles of teachers and parents in a child’s education to the roles of a mechanic and the car owner:

"Generally speaking my mechanic’s knowledge of cars exceeds mine, but I know the fine nuances of my car better than he does. I drive my car every day. I know when something is not quite right. I know its quirks, the storms it has weathered, where it has been and the kind of roads it spends most of its time on. My car runs best when my mechanic and I each bring our expert knowledge about my car to the table to make informed decisions about what my car needs.

Children make the most progress when families and educators collaborate in an effort to provide an engaging educational environment that offers rich relationships and meaningful learning opportunities for each child."
Bereton, Amy (2010), The Key to Children’s Learning
Success, http://takomacooperativeschool.org.

While applicable to all, this is so true in the case of a special needs child. I would take this one step further and recommend adding the child’s private doctors and therapists to the mix because they play an integral role in this partnership. How wonderful would it be if parents, educators and the medical community could work together, sharing their expertise to benefit the child?

I assembled the best team of doctors and therapists I could to supplement the services my son was getting in school. Not only did they validate my concerns but they also recognized my son’s unique gifts. Too often we get so wrapped up in focusing on a child’s deficits, we fail to see their strengths.

My son exhibits an amazing attention to detail especially as it relates to cars. He loves maps and has a keen sense of direction, something his father proudly calls his son’s exceptional “bat radar.” Who knows where these interests will take him? I do know that if we celebrate and nurture the gifts of a special needs child, s/he will feel valued and accepted.

Remember the doctor who first suggested an ASD? He was the first inductee in my child’s team of experts. As shocked as I was that first meeting, I knew I liked him right off the bat. His first question for me at that initial evaluation was, “So tell me all the wonderful things about your son.” 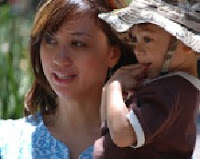 Melanie Carlos Costello is a single mom to a 6-year-old boy who was diagnosed with HFA at age 4. She is actively involved in the Montgomery County, MD area with autism-related causes. She is a PTA Special Ed Chair and the director of communications for the non-profit Partnership for Extraordinary Minds, a group dedicated to increasing services for diploma bound students on the autism spectrum (www.xminds.org).

When she’s not advocating for her son, she is a freelance producer/writer for documentary films for clients such as National Geographic Television, Discovery and the Smithsonian Channel.
at 6:15 AM