Is Your Child Ungifted?

When Jay Leno asked Steve Carell how his kids were doing, he didn’t seem too concerned:

“I hate it when people talk about kids on talk shows. I hate it, because every person who talks about their kids, their kids are obviously the most intelligent and the cutest. They’re all very, very gifted children. Ask me about my kids. They’re alright. Are they the cutest? Meh… They’ll get by. I mean, they’re not going to freak anyone out. In terms of intellect— it’s like, Ehhh, you know. They’re not going to be at the back of the class, not going to be at the front of the class– they’ll be in the middle kind of looking out the window. They’ll get by.”

Worried that your own child is ungifted? Take a cue from Carell and relax. Thankfully for you and your child, there are many conceptualizations of giftedness– and therefore many ways to not be ungifted.

Where should we start? How about with the most traditional conceptualization of them all: high IQ. Does your child score above 130 on an IQ test? If so, congratulations! We can probably stop right here. Historically, giftedness has been defined as top 2-3% on an IQ test.

While most gifted and talented programs these days no longer rely solely on this criteria, most programs in the United States do privilege the child’s IQ score above all other potential indicators of giftedness.**

So if your child scores above the arbitrary IQ threshold set by the school district, you should have no trouble convincing your school that your child isn’t ungifted.

What’s that, your child obtained an IQ score of 129 and missed the cut-off by a single point? Ouch! Well, I admit that’s unfortunate, but we’re still far from eliminating the possibility that your child is ungifted. It’s quite possible that you child’s true IQ score is really above the arbitrary IQ threshold set by your school district. There are many reasons why your child may not have reached 130 on the day he or she was tested. One possible cause is measurement error. Perhaps your child temporarily zoned out or became distracted on a few test items.

It’s also entirely possible that the school psychologist forgot to count one of the answers as correct. Administration errors are far more common than people realize. As educational psychologist Kevin McGrew notes, “This level of examiner error is alarming, particularly in the context of important decision-making.”

But the culprit may not have been measurement error. Genuine intellectual brain maturation and growth is possible. Neural connectivity associated with intellectual functioning is particularly receptive to enriching intellectual experiences in childhood and early adolescence, but neural wiring is still receptive to training and experience throughout the lifespan.

With greater intellectual enrichment and motivation, it’s quite possible that your child’s IQ score will reach that arbitrary gifted cut-off if tested again in the future.

Huh? You had your child’s IQ tested every single day for 10 years in a row, and it hasn’t budged an iota? Gulp. Okay, well, your child’s IQ score isn’t all that informative anyway when it comes to targeted, specific interventions. What’s far more helpful in terms of addressing the actual need of your individual child– especially if he or she has a learning disability– is to look at your child’s pattern of strengths and weaknesses. Tell your school psychologist the following:

“Please give my child a comprehensive battery of IQ and achievement tests adopting the cross-battery approach to assess the various specific cognitive abilities that are part of the Cattell-Horn-Carroll (CHC) Theory of Cognitive Abilities”.

Trust me, if your school psychologist is competent in the least, he or she will know what all that means. This will allow you to determine if your child is gifted in one of the following 9 broad domains of human intellectual functioning: 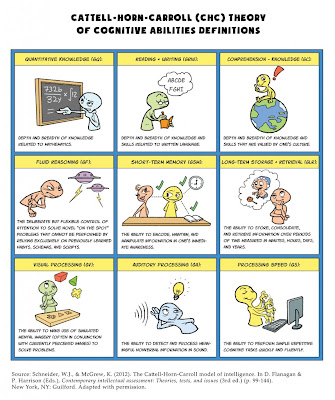 As long as the school psychologist assesses these abilities by adopting the intelligent testing approach– elevating your child above the numbers and seeing his or her test results in context– then the psychologist can use that information to design a specific acceleration program that will address your child’s unique needs.

Still ungifted? OK, time to roll up our sleeves and really broaden our focus. According to the federal definition, gifted and talented children are those who display high achievement and/or potential ability in general intellectual ability, specific academic aptitude, creative or productive thinking, leadership ability, or visual and performing arts, and who require services or activities that are not ordinarily provided by the school in order to fully develop those abilities.

This leaves a lot of latitude. Maybe your child struggles in the mainstream classroom, but writes wildly imaginative fiction novels in his or her spare time. Or maybe your child aces his or her algebra equations, but has difficulty memorizing vocabulary words. Perhaps your child prefers performing, whether it be acting, singing, or playing a musical instrument, but zones out when put in a passive classroom situation. Or your child is president of the student body and has instigated a massive revolt among the students. While unappreciated by the administration, your child’s actions reveal extraordinary leadership skills.

According to the federal definition, any of those behaviors demonstrate giftedness.

Still no good? OK, don’t panic yet. Theorists Howard Gardner and Robert Sternberg further expanded our concept of giftedness. Sure, Gardner proposes academic (verbal-linguistic, logical-mathematical, spatial) and musical abilities, which are already part of the Federal definition. But he also offers you some extra gifted goodies such as social intelligence (ability interacting with others and/or knowing yourself), bodily-kinesthetic intelligence (facility with bodily movement), and naturalistic intelligence (facility relating to nature).

Or take Sternberg’s theory, in which your child can not only be analytically, creatively, or practically gifted (i.e., exhibiting good common sense), but can also be gifted at wisdom if he or she does a good job balancing personal needs with the interest of others, all the while taking the broader societal context into consideration.

What about all that— is your child finally gifted yet? No? Don’t despair! Maybe your child doesn’t display high ability in any of the areas I just mentioned yet, but exhibits extreme passion and dedication. After researching eminent creators across a variety of fields, Joseph Renzulli concluded that those who achieve greatness in any field tend to not only display high ability in a particular domain and high levels of creative-productive giftedness (as opposed to “schoolhouse giftedness”), but they also tend to have extremely high task commitment.

Are we there yet? Have I finally assuaged your fears that that your child is totally and utterly ungifted? No? Really? 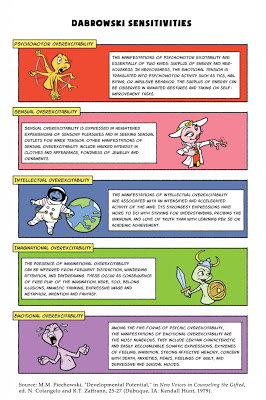 So go check right now: Is your teenager really sensitive and intense? No? He’s really chill and boring? Oh, alright. I didn’t want to go there, but you’ve forced me. It’s time to pull out the Characteristics of Giftedness Checklist, developed by Linda Silverman, director of the Gifted Development Center. We’ve already covered some of the characteristics on her checklist, such as “reasons well,” “learns rapidly,” “sensitive (feelings hurt easily),” “intense,” and “highly creative.”

But there’s more! Perhaps your child demonstrates some of these additional characteristics Silverman associates with giftedness:

No? None? At this point, I’ve got to ask: Are you sure your child is actually human?Perhaps you accidently picked him up from the zoo instead of the nursery? I won’t judge, it happens.

Look, if it’s really true that your child is perfectly average in every single human characteristic represented in all of the definitions of giftedness I presented to you, then I’m afraid there’s only one diagnosis left: your child is truly extraordinary! Just ungifted.

For a more in depth discussion of different conceptualizations of giftedness, and the development of a wide variety of personal characteristics, see my new book Ungifted: Intelligence Redefined.

** While standardized tests of achievement are also privileged measures of giftedness, they are for the most part IQ tests in disguise.

Scott Barry Kaufman is adjunct assistant professor of psychology at New York University, where he teaches courses on cognitive psychology and human intelligence. He is author of Ungifted: Intelligence Redefined, editor of The Complexity of Greatness: Beyond Talent or Practice, and co-founder of The Creativity Post. Follow on Twitter@sbkaufman.
at 9:17 AM