From Toc-Talk
The Blog of Thinking Outside the Classroom

I recently had the thrill of a lifetime. By something of a fluke, I had a chance to play in the Grandmasters’ National Ultimate Tournament in Denver. (“Grandmasters” is a euphemism for “over 40.”) Discs floated and curved through the thin Colorado air along the sixteen perfect fields, and our humble team fought hard to try to “exceed the seed” of 16th place – another euphemism to say that we didn’t want to finish last.

In our sixth and final game, one of our players had the disc and was closely guarded. In Ultimate, you don’t move with the disc; you must throw the disc before the other player counts to 10 to pass it. Our guy, Victor, must have been at about “7” in the count when he apparently found his man.

He reached back, turned his head backward as well, and then unleashed the disc full force – past his defender and over the heads of everyone on the field and, quite possibly, over any low-flying planes. The disc sailed over the entire end zone and on to places never before visited by a sports object. 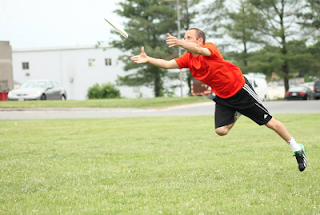 The audience was stunned. Our team was stunned but recovered quickly, remembering that Victor himself had told us only moments before that we needed to “step it up” and “heckle anyone who doesn’t.” The heckling began in earnest – “What are you thinking?” “How much did the other team pay you?” and so forth – until Victor turned to face our entire team.

He lifted his arms above his head and roared, “I BELIEVE IN MYSELF!!!”

Everyone stopped! And then, as if a fuse was lit, everybody cracked up. Victor’s rapid and unflinching defense of himself was so unexpected that we could only laugh in disbelief and admiration.

It could have been the agony of defeat, but by deciding to be completely positive even in the face of undeniably screwing up, he focused on his overall self-regard and did not worry about a lapse in judgment. He did many other things that were important – playing tough defense, receiving and throwing short passes, and cheering for the rest of us.

But the most important thing was showing us what it means to have attitude, and how to talk yourself positive before you have the chance to turn an error into a defeat.

The vicious cycle that so many of us get into – I screwed up, therefore I’m a screw-up, therefore I give up, and, see, I screwed up again – is not at all necessary. Let it go with abandon – the way Vic did when he threw the disc and, more importantly, the way he did immediately after.
at 9:45 AM