The fields of psychology and education were revolutionized 30 years ago when the now world-renowned psychologist Howard Gardner published his 1983 book Frames of Mind: The Theory of Multiple Intelligences, which detailed a new model of human intelligence that went beyond the traditional view that there was a single kind that could be measured by standardized tests. (Read his account of how he came up with the theory here.) 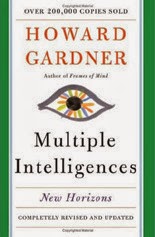 Gardner’s theory initially listed seven intelligences which work together: linguistic, logical-mathematical, musical, bodily-kinesthetic, spatial, interpersonal and intrapersonal; he later added an eighth, naturalist intelligence and says there may be a few more. The theory became highly popular with K-12 educators around the world seeking ways to reach students who did not respond to traditional approaches, but over time, “multiple intelligences” somehow became synonymous with the concept of “learning styles.” In this important post, Gardner explains why the former is not the latter.

Gardner now teaches at the Harvard Graduate School of Education. He is the author of numerous books on intelligence and creativity. His new book,  The App Generation, co-authored with Katie Davis, explains how life for young people today is different than before the dawn of the digital age, and will be published on Oct. 22 by Yale University Press.

It’s been 30 years since I developed the notion of “multiple intelligences.” I have been gratified by the interest shown in this idea and the ways it’s been used in schools, museums, and businesses around the world. But one unanticipated consequence has driven me to distraction—and that’s the tendency of many people, including persons whom I cherish, to credit me with the notion of ‘learning styles’ or to collapse ‘multiple intelligences’ with ‘learning styles.’ It’s high time to relieve my pain and to set the record straight.

First a word about “MI theory.” On the basis of research in several disciplines, including the study of how human capacities are represented in the brain, I developed the idea that each of us has a number of relatively independent mental faculties, which can be termed our “multiple intelligences.” The basic idea is simplicity itself. A belief in a single intelligence assumes that we have one central, all-purpose computer—and it determines how well we perform in every sector of life.

Even before I spoke and wrote about “MI,” the term “learning styles” was being bandied about in educational circles. The idea, reasonable enough on the surface, is that all children (indeed, all of us) have distinctive minds and personalities. Accordingly, it makes sense to find out about learners and to teach and nurture them in ways that are appropriate, that they value, and—above all—that are effective.

Two problems. First, the notion of ”learning styles”’ is itself not coherent. Those who use this term do not define the criteria for a style, nor where styles come from, how they are recognized/assessed/exploited. Say that Johnny is said to have a learning style that is ‘impulsive.” Does that mean that Johnny is “‘impulsive” about everything? How do we know this?

What does this imply about teaching—should we teach “impulsively,” or should we compensate by “teaching reflectively?” What of a learning style that is “right-brained” or visual or tactile? Same issues apply.

Problem #2. When researchers have tried to identify learning styles, teach consistently with those styles, and examine outcomes, there is not persuasive evidence that the learning style analysis produces more effective outcomes than a “one size fits all approach.” Of course, the learning style analysis might have been inadequate. Or even if it is on the mark, the fact that one intervention did not work does not mean that the concept of learning styles is fatally flawed; another intervention might have proved effective. Absence of evidence does not prove non-existence of a phenomenon; it signals to educational researchers: ‘back to the drawing boards.’

Here’s my considered judgment about the best way to parse this lexical terrain:

Senses: Sometimes people speak about a “visual” learner or an “auditory” learner. The implication is that some people learn through their eyes, others through their ears. This notion is incoherent. Both spatial information and reading occur with the eyes, but they make use of entirely different cognitive faculties. Similarly, both music and speaking activate the ears, but again these are entirely different cognitive faculties.

Recognizing this fact, the concept of intelligences does not focus on how linguistic or spatial information reaches the brain—via eyes, ears, hands, it doesn’t matter. What matters is the power of the mental computer, the intelligence, that acts upon that sensory information, once picked up.

These distinctions are consequential. My goal here is not to give a psychology or a physiology or a physics lesson but rather to make sure that we do not fool ourselves and, as important, that we do not short change our children. If people want to talk about ‘an impulsive style’ or ‘a visual learner,’ that’s their prerogative. But they should recognize that these labels may be unhelpful, at best, and ill-conceived at worst.

As an educator, I draw three primary lessons for educators:

1.) Individualize your teaching as much as possible. Instead of “one size fits all,” learn as much as you can about each student, and teach each person in ways that they find comfortable and learn effectively. Of course this is easier to accomplish with smaller classes. But ‘apps’ make it possible to individualize for everyone.

2.) Pluralize your teaching. Teach important materials in several ways, not just one (e.g. through stories, works of art, diagrams, role play). In this way you can reach students who learn in different ways. Also, by presenting materials in various ways, you convey what it means to understand something well. If you can only teach in one way, your own understanding is likely to be thin.