When and how long a baby looks at other people’s eyes offers the earliest behavioral sign to date of whether a child is likely to develop autism, scientists are reporting.

In a study published Wednesday, researchers using eye-tracking technology found that children who were found to have autism at age 3 looked less at people’s eyes when they were babies than children who did not develop autism. 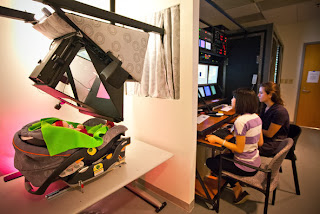 But contrary to what the researchers expected, the difference was not apparent at birth. It emerged in the next few months and autism experts said that might suggest a window during which the progression toward autism can be halted or slowed.

The study, published online in the journal Nature, found that infants who later developed autism began spending less time looking at people’s eyes between 2 and 6 months of age and paid less attention to eyes as they grew older. By contrast, babies who did not develop autism looked increasingly at people’s eyes until about 9 months old, and then kept their attention to eyes fairly constant into toddlerhood.

“This paper is a major leap forward,” said Dr. Lonnie Zwaigenbaum, a pediatrician and autism researcher at the University of Alberta, who was not involved in the study. “Documenting that there’s a developmental difference between 2 and 6 months is a major, major finding.”

The authors, Warren R. Jones and Ami Klin, both of the Marcus Autism Center and Emory University, also found that babies who showed the steepest decline in looking at people’s eyes over time developed the most severe autism.

“Kids whose eye fixation falls off most rapidly are the ones who later on are the most socially disabled and show the most symptoms,” said Dr. Jones, director of research at the autism center. “These are the earliest known signs of social disability, and they are associated with outcome and with symptom severity. Our ultimate goal is to translate this discovery into a tool for early identification” of children with autism.

The eye-tracking differences are not something parents and pediatricians would be able to perceive without the technology and expertise of an autism clinic, Dr. Jones said. “We don’t want to create concern in parents that if a child isn’t looking them in the eyes all the time, it’s a problem,” he said. “It’s not. Children are looking all over the place.”

Autism therapies have not yet been developed for young babies, but there are efforts to adapt intensive behavioral therapy for use with children as young as 12 months, Dr. Jones said.

Diagnoses of autism have increased, according to the Centers for Disease Control and Prevention, from one child in 150 in 2002 to one in 88 in 2008. The reasons are unclear, although some factors could be greater awareness of the disorder and a growing number of older fathers.

Dr. Jones and Dr. Klin, who directs the autism center, studied two groups of babies. One group was at high risk for autism, with a 20 times greater likelihood of developing it because they had siblings with the disorder. The other group was at low risk, with no relatives with autism.

The researchers assessed 110 children, from 2 months to 2 years of age, 10 times while watching videos of friendly women acting like playful caregivers. Eye-tracking technology traced when the babies looked at the women’s eyes, mouths and bodies, as well as toys or other objects in the background. At age 3, the children were evaluated for autism. Ultimately, researchers used data from 36 boys, 11 of whom developed autism. (They excluded data from girls because only two developed autism.)

While the number of children studied was small — and the researchers are now studying more children — experts not involved in the study said the results were significant because of the careful and repeated measurements that were not just snapshots, but showed change over time.

“It’s well done and very important,” said Dr. Geraldine Dawson, director of the Center for Autism Diagnosis and Treatment at Duke University. She said it was notable that “early on these babies look quite normal; this really gives us a clue to brain development.”

She said a possible explanation was that early in life, activities like looking at faces are essentially reflexes “controlled by lower cortical regions of the brain that are likely intact” in children with autism. But “as the brain develops, babies begin to use these behaviors in a more intentional way. They can look at what they want to look at. We think that these higher cortical regions are the ones that are not working the same” as in typical children.

Dr. John N. Constantino, a child psychiatrist and pediatrician at Washington University in St. Louis, said the study showed that “babies who develop autism are for the most part doing an awful lot of things right for the first few months.” Perhaps the genes that drive autism begin to derail typical development after that, so that “what you are looking at moment by moment, day by day, second by second, is completely different from what other children are looking at, and the cumulative experience is what sends you off into the trajectory of autism.”

Dr. Dawson said that looking at people teaches babies about “facial expressions and language and gesture. If the baby who’s developing autism is paying attention to objects, they’re really losing out on those opportunities.”

Before this study, experts said, research found that potential signs of autism — including differences in temperament, eye contact and pointing out objects — could be detected late in a child’s first year. Most cases of autism in children are diagnosed between ages 3 and 5, although the American Academy of Pediatrics recommends screening children at between 18 and 24 months.

But the new study suggests the need to develop therapies that begin even earlier. “The train has long left the station if you don’t start intervention until 18 months,” Dr. Constantino said.

He continued, “I think we’d see the same things if we were measuring a child’s social reciprocity via touch or auditory listening preferences, but those are harder to measure.”

He and Dr. Klin advocate the eventual use of eye tracking and other measures in social development growth charts, similar to height and weight charts. Still, the authors and other experts cautioned that the results required confirmation in many more children.

Autism is so complex and varied that eye-tracking is unlikely to be able to identify every condition on the autism spectrum, Dr. Zwaigenbaum and others said. But they said the study helped illustrate the need for therapies to increase social engagement among very young infants, “either by intensifying the experience for them or making it pleasurable in other ways,” Dr. Constantino said.

“It really does present an opportunity for seeing if we could do some preventative interventions,” said Dr. Sally Ozonoff, vice chairwoman for research in psychiatry and behavioral sciences at the MIND Institute of the University of California, Davis. “Maybe you could keep the child from heading into that decline, so it doesn’t turn into autism.”
at 7:53 AM