Female Autism and How it Differs from Male Autism

From The Brain Bank

With autism, there exists a wide diagnostic spectrum. In other words, the severity of symptoms varies greatly among autistic individuals. Hence, they can be diagnosed in a number of ways: from high functioning to moderate and low functioning. However, one aspect of autism that doesn’t receive enough attention is the different way the condition manifests in boys versus girls.

For years, autism has been known to occur more frequently in boys than in girls. Indeed, according to the CDC, up to 5 times as many boys are diagnosed with autism than girls. This may be explained by the different manifestations of ‘autistic’ behaviours seen in girls and women compared with boys and men. These differences may also have important implications for both diagnoses and treatment. 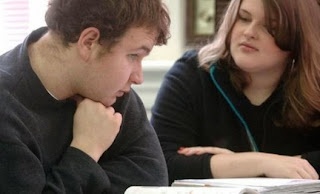 Theories on Why Girls Exhibit Autistic Behaviours Differently from Boys

Autism generally develops in the first three years of life and affects the development of social and communication skills. Studies are finding that the brains of females with autism appear more like healthy male brains than those of healthy females.

Currently, there’s no good explanation why males predominante when it comes to autistm, but theories suggest that hormones could protect girls from autism and other developmental disorders. Specifically, hormone levels in-utero may influence genetic factors that can turn the autism susceptibility genes “on” and “off” during development. Another theory suggests that young girls naturally have better social skills than boys so need a larger dose of what causes ASD to cross that threshold to being impaired.

A third theory points to societal expectations, which make it harder to spot autistic behaviour patterns in girls. Since society places a higher demand on women to develop strong social skills, autistic girls may be under more pressure than their male counterparts to develop coping strategies. Indeed, girls may be able to mask what we traditionally think of as the signs of autism through imitating the social behaviours of other children. This masking can lead to a great deal of stress, meaning many autistic girls go on to develop secondary problems such as eating disorders, depression and anxiety.

It’s plausible that once we identify and understand these female protective factors, this may play an important role in uncovering novel interventions and treatments.

Symptoms of ASD in Females

The symptoms of ASD often appear as extreme shyness or anxiety in girls. They also show fewer repetitive behaviours such as spinning, rocking and less sensory sensitivity than boys. Since these signs are often subtle in women, physicians may fail to recognize the disorder. Diagnosis at a later age reduces the chances of early treatment, which usually can provide a better long-term outcome.

Some evidence suggests that girls with ASD are also bullied less often than male sufferers. They appear to blend in more easily with their peers and are less often the victim of bullying by other girls.

Generally, looking at someone’s eyes is an appropriate and effective way to pick up social cues. However, with autistic children, boys are more likely than girl to stray from this typical eye-gaze pattern. Boys tend to not look at the central character’s eyes at the appropriate time. Girls, however, diverge from the typical pattern less often.

Additionally, boys who display high levels of eye contact are often found to have higher social abilities than boys who do not. In girls, however, the opposite is true. The more girls with autism make eye contact, the more severe their social disabilities can be. This suggests that the boys’ and the girls’ attention are serving different functions, perhaps reflecting different strategies in their social learning.

Understanding these differences both socially and biologically can improve the long-term outcome of all children with ASD. Most importantly, health care professionals need to be sensitive to how the disorder shows up in girls so that those affected can receive early intervention as soon as possible. Scientists are urging for more research in regards to autism in girls and women so that gender doesn’t remain a barrier when it comes to understanding this disorder.

David Novak is a international syndicated newspaper columnist, appearing in newspapers, magazines, radio and TV around the world. His byline has appeared in GQ, Newsweek, and The Wall Street Journal, among others. He also has an autistic child, and has studied and written about the many social aspects of this condition.

David is a health and diet enthusiast, and frequently writes on a wide array of health topics for various publications, including regular editions appearing in healthline.com. For more of his Healthline articles, visit http://www.healthline.com/.

About The Brain Bank

The brain bank comprises a group of Manchester based scientists eager to enthuse and entertain with their scientific banter. To learn more about who we are see the our 'about' page. You can also find us on twitter @brainbankmanc or email us brainbankmanc@gmail.com.
at 7:39 AM