How to Help a Traumatized Child in the Classroom

Exposure to chronic trauma is having tragic effects on some of our students. How can educators help?

According to the Children’s Defense Fund, one in three African-American boys and one in six Latino males born in 2001 will end up imprisoned sometime in his lifetime. These staggering numbers are tragic beyond words.

But in order to change them, we have to change how we perceive the children behind the statistics. 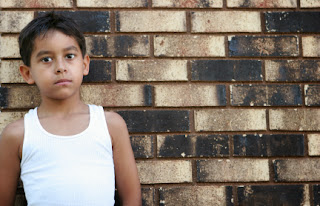 One of us (Joyce) helps teachers and administrators do just this. Joyce works with the San Francisco Unified School District’s Student, Family, Community Support Department and several underserved San Francisco schools through her award-winning UCSF Healthy Environments and Response to Trauma in Schools (HEARTS) program.

While educators sometimes see a misbehaving child as a bad kid or a mean or oppositional kid, Joyce helps them to see that this is a scared kid. In other words, the child’s behavior is the result of chronic exposure to traumatic events beyond his or her control.

In addition to impacting behavior, trauma can wreak havoc on a student’s ability to learn. Scientists have found that children who have been subjected repeatedly to trauma suffer from other social, psychological, cognitive, and biological issues, including difficulty regulating their emotions, paying attention, and forming good relationships—all of which make it very difficult for a child to succeed in school.

But trauma exposure does not seal one’s fate. As the UCSF HEARTS program teaches, there are things that educators and other caring adults can do to mitigate the effects of trauma—and help at-risk students flourish rather than fail.

The Scourge of Complex Trauma

Most of us have experienced some kind of traumatic event in our lives when a situation so overwhelmed us that our brain and body were unable to cope with it. Depending on our internal and external resources, most of us were probably able to recover. However, children who live in under-resourced communities—where domestic and neighborhood violence, racial discrimination, and poverty are more prevalent—can develop post-trauma difficulties after experiencing what is called complex trauma.

Complex trauma occurs through repeated and prolonged exposure to trauma-inducing situations, most of which take place in a care-giving situation. When a child can’t rely on a close caregiver for comfort and safety—whether due to the caregiver’s own emotional suffering or because the caregiver is the source of trauma—that young person’s ability to metabolize and recover from toxic stress gets seriously hampered.

The metaphor Joyce uses in her work with schools to explain the effects of complex trauma is that of a vinyl record. When a song is played again and again, a groove is worn into the record. If, when playing a different song, someone accidentally knocks the record player, the needle will skip across the record and land in the deepest groove, playing that song yet again. Even when you reach the end of the song, sometimes the groove is so deep the needle skips back to play it once more.

"Like a needle on a record player, complex trauma wears a groove in the brain. So when something non-threatening happens that reminds us of a traumatic incident, our bodies replay the traumatic reaction..."

Like a needle on a record player, complex trauma wears a groove in the brain. So when something non-threatening happens that reminds us of a traumatic incident, our bodies replay the traumatic reaction—mobilizing us to either run from or fight the threat, while shutting down other systems that help us think and reason.

If this happens over and over, we become more easily triggered into that fear response mode, never giving our bodies time to recover. After awhile, as we adapt to this chronic triggering, our behavior can seem crazy or rude when taken out of the context of trauma.

For a child in a classroom, something as simple as the teacher raising his or her voice to get everyone’s attention or accidentally getting bumped by another classmate can steer that child into this groove. When triggered, the child’s out-of-proportion emotional and sometimes physical reaction often makes no sense whatsoever to the teacher, making it difficult for the teacher to respond appropriately.

So what can teachers do to help students in their classrooms who have experienced complex trauma? In her work with educators, Joyce offers the following four strategies.

1.) Recognize that a child is going into survival mode and respond in a kind, compassionate way. When you notice that a child might be having a difficult time, start by asking yourself, “What’s happening here?” rather than “What’s wrong with this child?” This simple mental switch can help you realize that the student has been triggered into a fear response, which can take many forms. For example, the student might:

It’s worth noting that not all kids will act out. However, for those who do, once you recognize the trigger, kindly and compassionately reflect back to the child: “I see that you’re having trouble with this problem,” or “You seem like you’re getting kind of irritated,” and then offer a couple choices of things the child can do, at least one of which should be appealing to him or her.

This will help the child gain a sense of control and agency and help him or her to feel safe once more. Over time, if a student who is experiencing something that is frightening or harmful sees that you really care and understand, then he or she will be more likely to say, “I need help.”

2.) Create calm, predictable transitions. Transitions between activities can easily trigger a student into survival mode. That feeling of “uh oh, what’s going to happen next” can be highly associated with a situation at home where a child’s happy, loving daddy can, without warning, turn into a monster after he’s had too much to drink.

Some teachers will play music or ring a meditation bell or blow a harmonica to signal it’s time to transition. The important thing is to build a routine around transitions so that children know: a.) what the transition is going to look like, b.) what they’re supposed to be doing, and c.) what’s next.

3.) Praise publicly and criticize privately. For children who have experienced complex trauma, getting in trouble can sometimes mean either they or a parent will get hit. And for others, “I made a mistake” can mean “I’m entirely unlovable.” Hence, teachers need to be particularly sensitive when reprimanding these students.

To use Rick Hanson’s words in his presentation at the GGSC Summer Institute of Educators:

“Nurture the hell out of these children.” Capture those moments when the student is doing really well and point it out to build his or her self-worth: “Wow, I love how you sat at your desk for a whole five minutes” or, “Thank you for helping your classmate.”

When you need to re-direct the behavior, do so privately and in as calm a voice as possible.

4.) Adapt your classroom’s mindfulness practice. Mindfulness is a fabulous tool for counteracting the impact of trauma. However, it can also be threatening for children who have experienced trauma, as the practice may bring up scary and painful emotions and body sensations.

If you use mindfulness in your classroom, you might consider using the following adaptations that the UCSF HEARTS program and Mindful Schools created:
By breaking mindfulness practice down into these elemental components, the child is more likely to have a successful experience—and thus be more willing to practice in the future.

5.) Take care of yourself. This actually should be number one! The metaphor of putting on your own oxygen mask first before putting it on the child is very true in this situation.

NOTE: The HEARTS program, part of a growing "sensitive schools" movement, draws upon the groundbreaking work of the Trauma and Learning Policy Initiative (TLPI), a collaboration between Harvard Law School's Education Law Clinic and Massachusetts Advocates for Children.
at 9:01 AM