Nicholas and Beverly Serna's daughter Caitlin was only four years old, but they already knew there was a problem.

Day after day, upon arriving home from preschool, Caitlin would retreat into a bizarre fantasy world. Sometimes, she would pretend to be people and things she was not. Other times, without warning, she would burst into nonsensical song. Some days she would run directionless through the backyard of the Sernas' comfortable Redlands home, laughing and shrieking as she chased imaginary objects.

When months of sessions with a local psychologist failed to yield an answer, Nicholas and Beverly took Caitlin to a prominent Los Angeles pediatric neurologist for more exhaustive testing. Finally, on Sept. 11, the Sernas received the heartbreaking news: Caitlin was among a growing legion of U.S. children suffering from Youthful Tendency Disorder.

"As horrible as the diagnosis was, it was a relief to finally know," said Beverly. "At least we knew we weren't bad parents. We simply had a child who was born with a medical disorder."

"The Youthful child has a kind of love/hate relationship with reality," said Johns Hopkins University YTD expert Dr. Avi Gwertzman. "Unfit to join the adult world, they struggle to learn its mores and rules in a process that can take the entirety of their childhood. In the meantime, their emotional and perceptive problems cause them to act out in unpredictable and extremely juvenile ways. It's as though they can only take so much reality; they have to 'check out,' to go Youthful for a while."

On a beautiful autumn day in Asheville, NC, six-year-old Cameron Boudreaux is swinging on a park swingset–a monotonous, back-and-forth action that apparently gives him solace. Spotting his mother on a nearby bench, Cameron rushes eagerly to her and asks, "Guess what?" His mother responds with a friendly, "What?"

With unbridled glee, Cameron shouts, "Chicken butt!"--cryptic words understood only by him--before laughing and dashing off again, leaving his mother distraught over yet another baffling non-conversation.

"I must admit, it's been a struggle," Mary Boudreaux said. "What can I say to him when he says something like that, something that makes no sense? Or when he runs through the house yelling while I'm trying to balance the checkbook? You can't just say, 'Please, Cameron, don't have a disorder for just a few minutes so I can concentrate.'" 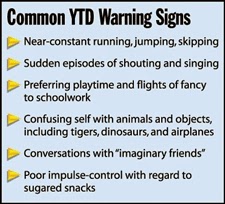 Cameron's psychological problems run even deeper. He can name every one of his beloved, imaginary Pokemon characters, but the plain realities of the actual world he inhabits are an enigma: Ask Cameron the name of the real-life city councilman sponsoring the referendum to renovate the park just across the street from his house–a park he plays in daily–and he draws a blank.

According to Dr. Dinesh Agarwal, director of child psychiatry at NYU Medical Center, such disconnectedness from reality is a coping mechanism for YTD sufferers. "The Youthful child is born into a world he or she does not fully understand," Agarwal said. "Their brain pathways are still forming, and they need to repetitively relearn how to assimilate into society. These disassociative play-fantasies apparently help them accomplish that."

But such fantasies come at a price, producing in Youthful children a disinterest in the everyday responsibilities of life bordering on contempt.

"Jesse knows when it's his turn to take out the trash. We've gone over the house rules a dozen times," said Richard Torres, a Davenport, IA, father of three whose nine-year-old son Jesse was recently diagnosed with YTD. "And still he neglects the job time and again."

Slowly, methodically, through an elaborate system of rewards and punishments, Jesse has shown improvement. But the road ahead is long.

"We get a lot of platitudes from the so-called experts," Torres said. "We hear a lot of, 'Oh, he'll grow out of it, just give it time.' That's easy for them to say–their kid's not running around the neighborhood claiming to be Superman."

Help for families struggling with YTD may soon be on the way. At last month's annual AMA Convention, Smithkline-Beecham unveiled Juvenol, a promising YTD drug which, pending FDA approval, could reach the U.S. market as early as next spring. Already available in France and Sweden, Juvenol, the Swedish newspaper Aftonbladet reported, resulted in a 60 percent decrease in running and jumping among users.

But until such help arrives, the parents of YTD sufferers can do little more than try to get through each day.

"I love my child with all my heart," said Alexandra Torres, Jesse's mother. "But when he's in the throes of one of his skipping fits, it's hard not to feel a little envious of parents with normal, healthy children."
at 7:26 AM