In an age where media plays a dominant role in the lives of American children, doctors are recommending that parents establish a media consumption plan for their families. A newly revised policy statement on children, adolescents and the media released on Monday by the American Academy of Pediatrics (AAP) offers guidance for managing kid’s use of media [1]. 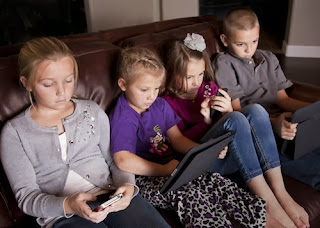 Victor Strasburger, M.D., FAAP, co-author of the report, said concerns about children’s use of media have become increasing urgent [2]:

"For nearly three decades, the AAP has expressed concerns about the amount of time that children and teenagers spend with media, and about some of the content they are viewing. The digital age has only made these issues more pressing."

According to a 2010 Kaiser Family Foundation study, the average 8- to 10-year-old spends nearly eight hours a day with a variety of different media, such as television, cell phones, iPads and social media. Older children and teenagers spend more than 11 hours per day. In fact, young people spend more time with media than they do in school, and it is the leading activity for children and teenagers other than sleeping.

Although media by itself is not the leading cause of any health problems, excessive media use is associated with obesity, sleep loss, school problems, aggression and other behavior issues.

Six tips to Guide Parents with Kids’ Media Use

A Family Plan for Media Use

A family media use plan is a set of rules for managing a family’s media consumption. It should take into account not only the quantity but the quality and location of media use. Consider TVs, phones, tablets and computers. The rules for use should be written down and agreed upon by all family members.