How Exercise Helps With ADHD Symptoms

"Exercise increases chemicals in the brain that regulate your emotions and moods. For people with ADHD, that means their attention span, focus, and sleep patterns may improve..."

Exercise is great for people with attention deficit hyperactivity disorder (ADHD). For starters, exercise increases the levels of brain chemicals called dopamine and serotonin, which are lower in people with ADHD.

ADHD and Exercise: How it Helps

“Dopamine and serotonin are enzymes that help people feel good,” says Frank Coppola, a New York City-based ADHD coach. “They regulate things like mood, attention, and anger. So having more rather than less definitely helps someone with ADHD.”

Exercise also helps with alertness and sleep patterns, which can be a problem for people with ADHD, Coppola says. “Exercising tires your body, so you sleep better and feel more focused and alert the next day.”

Exercise helps you relax and quiet your mind as well. “Exercise helps cut down your chance of depression, which can accompany ADHD. It increases oxygen to the brain, improves your eating habits and can help with weight loss,” Coppola says.

You can join a gym or hire a personal trainer, but there are many inexpensive ways to exercise. You might buy exercise videos or DVDs, or just get out there and move.

For example. you can:
ADHD and Exercise: Get Disciplined

“What’s hard for people with ADHD, and of course other people too, is having the discipline to make exercise a part of their life,” says Coppola. “I believe that doing something for 30 days can create a new habit so that’s the approach I suggest.”

According to Coppola, the first 10 days are usually the hardest. “A rocket launch uses 85 percent of its fuel on the ground,” says Coppola. “Look at your first 10 days as your launch time.”

Start by setting reasonable goals for yourself. Exercise 10 or 15 minutes daily for those first 10 days. You eventually want to reach 30 minutes a day to maintain the benefits for people with ADHD. Around the sixth day, the body starts to react.

“Your body gets used to the exercise and starts to want it. This makes it a little easier to stick with your exercising,” explains Coppola. After 10 to 20 days you will feel it if you miss a session. As you stick with it, you’ll find that during the next 20 to 30 days your body really starts to crave the exercise,” adds Coppola.

ADHD and Exercise: Mix It Up

Since people with ADHD can be easily bored without diversity, it’s a good idea to vary the kind of exercise you do. Here are more of Coppola’s suggestions:
If you don’t stick with your exercise plan, don’t beat yourself up, as people with ADHD are prone to do. “Just say ‘okay’ and start again,” Coppola says. 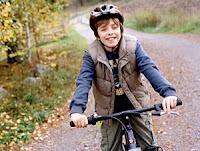 ADHD and Exercise: Getting Kids Moving

Children with ADHD also need to exercise. Just as with adults, exercise increases dopamine and serotonin levels in kids, helping them be more alert and attentive, and tires them out at night, helping with sleep problems.

“Most schools have gym classes or sports teams,” Coppola says. “If your child isn’t getting exercise at school, offer them the chance of after-school activities such as gymnastics, karate, or soccer.”

All in all, exercise is a great prescription for ADHD. So strap on those rollerblades, get out your yoga mat, put on your walking shoes, and have a good time. It’ll feel good.
at 1:32 PM