Mapping How Emotions Manifest in the Body

Across cultures, people feel increased activity in different parts of the body as their mental state changes.

Many years ago, I was in Brussels, Belgium, spending a day interviewing with a series of prospective internships. I frantically rehearsed my resume bullet points—in English and French—as I tried to navigate my way through the unfamiliar city to make four different appointments.

Just as I was mouthing sciences politiques to myself for the hundredth time on the metro, I realized that my hands and feet had begun to sweat uncontrollably. Soon, I was sliding around in my sensible, black “grown person” shoes as I dashed through the cobblestoned streets. Each new potential boss was met with a shaky bonjour and an outstretched hand that felt like a cold sponge.

I hadn't contracted some rare, waffle-induced glandular disorder. Emotions (anxiety, in my case) can activate nervous system, endocrine, and musculoskeletal responses, giving us tingles down the spine, flushed faces, and other classic physical manifestations.

A new study by Finnish researchers published today in the Proceedings of the National Academies of Sciences, suggests that our emotions do indeed tend to influence our bodies in consistent ways.

Across five experiments, 701 participants “were shown two silhouettes of bodies alongside emotional words, stories, movies, or facial expressions. They were asked to color the bodily regions whose activity they felt increasing or decreasing while viewing each stimulus.”

The emotions were generated by having the subjects read short stories or watch movies. On a blank, computerized figurine, they were then asked to color in the areas of their body where sensations became stronger (the red and yellow) or weaker (blue and black) when they felt a certain way. 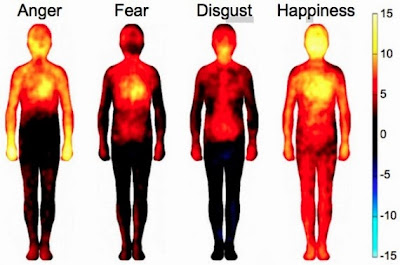 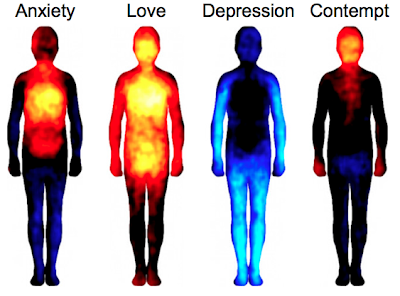 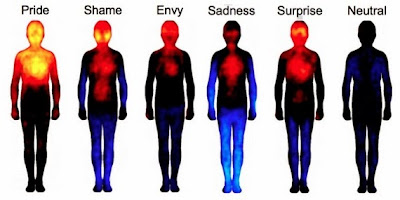 The mapping exercise produced what you might expect: an angry hot-head, a happy person lighting up all the way through their fingers and toes, a depressed figurine that was literally blue (meaning they felt little sensation in their limbs). Almost all of the emotions generated changes in the head area, suggesting smiling, frowning, or skin temperature changes, while feelings like joy and anger saw upticks in the limbs—perhaps because you’re ready to hug, or punch, your interlocutor.

Meanwhile, “sensations in the digestive system and around the throat region were mainly found in disgust,” the authors wrote. It's worth noting that the bodily sensations weren't blood flow, heat, or anything else that could be measured objectively—they were based solely on physical twinges subjects said they experienced.

The correlations between the subjects’ different body maps were strong—above .71 for each of the different stimuli (words, stories, and movies). Speakers of Taiwanese, Finnish, and Swedish drew similar body maps, suggesting that the sensations are not limited to a given language.

So what are we seeing in these illustrations? The authors note that, measured physiologically, most feelings only cause a minor change in heart rate or skin temperature—our torsos don’t literally get hot with surprise.

Instead, the results likely reveal subjective perceptions about the impact of our mental states on the body, a combination of muscle and visceral reactions and nervous system responses that we can’t easily differentiate. Feeling jealous may not truly make us red in the face, for example, but we certainly might feel like it does.

At the very least, the authors might have created the most scientifically detailed emoji ever—something they can feel proud in the chest about.
at 6:40 AM