Kids aren’t the only ones missing Physical Education. A recent poll found that more than 25% of parents surveyed were not satisfied with the amount of PE their children are receiving at school.

According to a post on Education Week’s Schooled in Sports blog, the survey conducted by the Robert Wood Johnson Foundation, the Harvard School of Public Health and National Public Radio found that “28% of parents gave their child’s school a C, D, or F grade on providing enough time for physical exercise; 44% gave a C, D, or F on encouraging students to walk or bike to school.”

Ironically, a sizable majority (80%) of the parents polled, gave their schools high marks (A’s or B’s) for the quality of their athletic facilities, including playgrounds, basketball courts, and ball fields. It seems as if the facilities are not being utilized in the way parents would like. 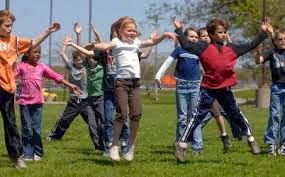 Given the rise in overweight and obesity rates among children, and the important role physical activity plays in maintaining healthy weight and overall well-being, it’s not surprising that parents are dissatisfied with their school’s PE offerings—particularly in light of the Dept. of Health and Human Services Guidelines, which call for children to participate in at least 60 minutes of moderate-to-vigorous physical activity each day.

Parents who are unhappy with the situation can bring the issue to their school boards.
at 7:03 AM