An Antidote for Mindlessness

From The New Yorker's Blog "Elements"

"Mindfulness training may work as a protective factor against the typical stresses of student life—or any stress, for that matter, since it improves emotional equilibrium and enables people to better handle distractions."

In the mid-nineteen-seventies, the cognitive psychologist Ellen Langer noticed that elderly people who envisioned themselves as younger versions of themselves often began to feel, and even think, like they had actually become younger. Men with trouble walking quickly were playing touch football. Memories were improving and blood pressure was dropping.

The mind, Langer realized, could have a strong effect on the body. That realization led her to study the Buddhist principle of mindfulness, or awareness, which she characterizes as “a heightened state of involvement and wakefulness.”

But mindfulness is different from the hyperalert way you might feel after a great night’s sleep or a strong cup of coffee. Rather, Langer writes, it is “a state of conscious awareness in which the individual is implicitly aware of the context and content of information.” 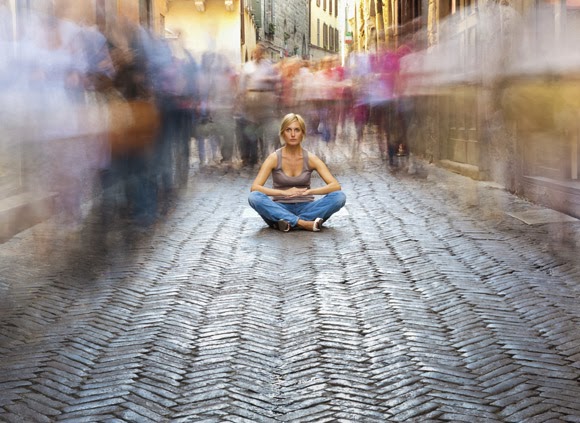 To illustrate the concept—or, rather, its opposite—Langer often recounts a shopping experience. Once, when Langer was paying for an item at a store, a clerk noticed that the back of her credit card wasn’t signed. After asking her to sign it, the clerk compared the scrawl on the receipt with the one on the card, to insure that no fraud was being committed. That, says Langer, is perfect mindlessness.

One of the first cognitive scientists to study mindfulness in an experimental setting, divorced from its spiritual trappings, Langer remained for years a lonely voice. But the past decade or so has seen a tremendous uptick in empirical research, as scientific collaborations with nontraditional schools, like the Dalai Lama’s Mind and Life Institute, have become more mainstream.

"...even brief mindfulness practice—typically, a kind of meditation that focusses on a particular aspect of the present moment, like your breath, your body, or a particular sensation—has a substantial positive effect on mental well-being and memory."

We now know, for instance, that even brief mindfulness practice—typically, a kind of meditation that focusses on a particular aspect of the present moment, like your breath, your body, or a particular sensation—has a substantial positive effect on mental well-being and memory. It also appears to physically improve the brain, strengthening certain neural structures that are tied to heightened attention and focus, and bolstering connectivity in the brain’s default mode network, which is linked to self-monitoring and control.

When Amishi Jha, a neuroscientist who directs the University of Miami’s Contemplative Neuroscience, Mindfulness Research, and Practice Initiative, first began researching the effects of mindfulness on cognitive performance, in the early aughts, most of the existing studies focussed on what could be easily tested: the effects of short bouts of intense practice on immediate cognitive performance.

There had been comparatively little work done on the lasting impacts of mindfulness training, especially under conditions of high stress—the equivalent of evaluating the impact of a week of training on the results of a two-hundred-yard dash versus examining the effects of months of training on a marathon time.

“The bulk of my work looks at high-stress cohorts, to see how mindfulness training can be protective against long-term stress,” Jha told me. It was also unclear how little meditation one could get away with and still emerge more mindful. “How low can you go? How little time can it take to sufficiently train people?” Jha said.

To test both the long-term impact of mindfulness and whether there might be a meditation equivalent of “Seven-Minute Abs,” Jha took a set of University of Miami students and split them into two groups, one that would receive mindfulness training and another that wouldn’t. “Their stress goes up throughout the semester, so you can really track performance over time—the natural decline caused by stress,” she said. The semester-long test would allow her to see whether mindfulness could benefit people in an increasingly hostile mental environment.

Jha designed a series of short, weekly training sessions, where students learned the basics of mindfulness theory and how to practice it—for instance, learning to focus on their breath while dismissing any intruding thoughts. In addition to a twenty-minute session with an instructor, they were asked to come in for two twenty-minute practice sessions each week, for seven weeks.

The combined hour of instruction and practice each week was far less extreme than previous mindfulness-training courses that Jha had developed; one that she created for the military totalled twenty-four hours of practice.

About two weeks into the semester, before the training began, the students were asked to complete several tests. First, they performed a series of tasks that required sustained attention. In one, they watched a string of digits appear on a screen, and were told to press the keyboard’s space bar every time a new digit appeared, unless that digit was a “3.” At a few points in the study, the flow of digits was interrupted by questions about the participant’s attention span.

In two subsequent tests, the students were assessed on their working memory capacity (how many letters in a list could they remember after solving an unrelated math problem?) and delayed-recognition working memory (could they quickly and accurately distinguish a face they had already seen from a set of new faces?). All of the students performed at roughly the same level.

Nine weeks later, when the students were tested again, large performance gaps had emerged: as the semester dragged on, the control group performed worse than they had originally, while the students who received mindfulness training became more accurate and focussed. Jha’s regimen, it seemed, wasn’t just a way to get better; it was a way to keep from getting worse.

Mindfulness training, Jha hypothesizes, may work as a protective factor against the typical stresses of student life—or any stress, for that matter, since it improves emotional equilibrium and enables people to better handle distractions. “It’s similar to how physical exercise can change the body.”

“We know that physical activity helps our bodies, but we’re just coming to the understanding that mental exercise is also critical to promoting mental well-being. It’s a cultural shift.”

Maria Konnikova is the author of “Mastermind: How to Think Like Sherlock Holmes.”﻿
at 6:23 AM