Must Read: The Overprotected Kid

A preoccupation with safety has stripped childhood of independence, risk taking, and discovery—without making it safer. A new kind of playground points to a better solution.

A trio of boys tramps along the length of a wooden fence, back and forth, shouting like carnival barkers. “The Land! It opens in half an hour.” Down a path and across a grassy square, 5-year-old Dylan can hear them through the window of his nana’s front room. He tries to figure out what half an hour is and whether he can wait that long. When the heavy gate finally swings open, Dylan, the boys, and about a dozen other children race directly to their favorite spots, although it’s hard to see how they navigate so expertly amid the chaos.

“Is this a junkyard?” asks my 5-year-old son, Gideon, who has come with me to visit. “Not exactly,” I tell him, although it’s inspired by one. The Land is a playground that takes up nearly an acre at the far end of a quiet housing development in North Wales. It’s only two years old but has no marks of newness and could just as well have been here for decades. The ground is muddy in spots and, at one end, slopes down steeply to a creek where a big, faded plastic boat that most people would have thrown away is wedged into the bank. The center of the playground is dominated by a high pile of tires that is growing ever smaller as a redheaded girl and her friend roll them down the hill and into the creek. “Why are you rolling tires into the water?” my son asks. “Because we are,” the girl replies. 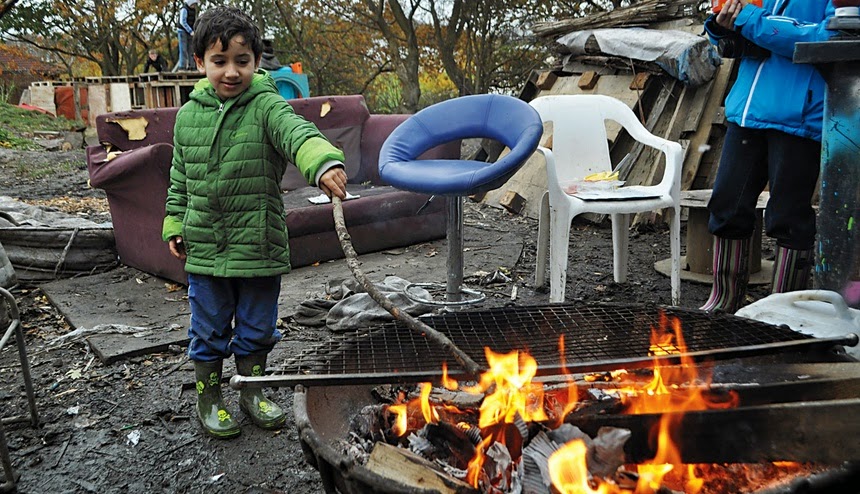 It’s still morning, but someone has already started a fire in the tin drum in the corner, perhaps because it’s late fall and wet-cold, or more likely because the kids here love to start fires. Three boys lounge in the only unbroken chairs around it; they are the oldest ones here, so no one complains. One of them turns on the radio—Shaggy is playing as the others feel in their pockets to make sure the candy bars and soda cans are still there. Nearby, a couple of boys are doing mad flips on a stack of filthy mattresses, which makes a fine trampoline.


At the other end of the playground, a dozen or so of the younger kids dart in and out of large structures made up of wooden pallets stacked on top of one another. Occasionally a group knocks down a few pallets—just for the fun of it, or to build some new kind of slide or fort or unnamed structure. Come tomorrow and the Land might have a whole new topography.

Other than some walls lit up with graffiti, there are no bright colors, or anything else that belongs to the usual playground landscape: no shiny metal slide topped by a red steering wheel or a tic-tac-toe board; no yellow seesaw with a central ballast to make sure no one falls off; no rubber bucket swing for babies. There is, however, a frayed rope swing that carries you over the creek and deposits you on the other side, if you can make it that far (otherwise it deposits you in the creek).

The actual children’s toys (a tiny stuffed elephant, a soiled Winnie the Pooh) are ignored, one facedown in the mud, the other sitting behind a green plastic chair. On this day, the kids seem excited by a walker that was donated by one of the elderly neighbors and is repurposed, at different moments, as a scooter, a jail cell, and a gymnastics bar.

The Land is an “adventure playground,” although that term is maybe a little too reminiscent of theme parks to capture the vibe. In the U.K., such playgrounds arose and became popular in the 1940s, as a result of the efforts of Lady Marjory Allen of Hurtwood, a landscape architect and children’s advocate. Allen was disappointed by what she described in a documentary as “asphalt square” playgrounds with “a few pieces of mechanical equipment.” She wanted to design playgrounds with loose parts that kids could move around and manipulate, to create their own makeshift structures.

But more important, she wanted to encourage a “free and permissive atmosphere” with as little adult supervision as possible. The idea was that kids should face what to them seem like “really dangerous risks” and then conquer them alone. That, she said, is what builds self-confidence and courage...

Read the rest of this provocative article HERE.
at 9:57 AM